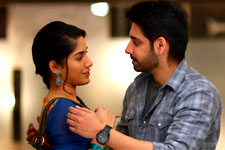 Veturi Sarma / fullhyd.com
EDITOR RATING
6.5
Performances
Script
Music/Soundtrack
Visuals
7.0
7.0
8.0
7.0
Suggestions
Can watch again
Yes
Good for kids
Yes
Good for dates
Yes
Wait to rent it
No
When it all comes together nicely, romcoms can seem deceptively simple, making us wonder why we don't get them right more often than we do. All it takes is creating a wish in the audiences that the lead pair - both not yet fully rounded personalities - to complete each other by coming together in the end.

Take Chi La Sow for instance. Arjun (Sushanth), a commitment phobic 27-year-old, doesn't want to get married, and has a list of reasons (he calls them his goals) that he feels others should accept and let him be. His mother (Anu Hasan) is relentless in her attempts to hook him up, while at office his friend (Vennela Kishore) stands as an example of what might happen when Arjun gets across the dreaded 30s. In a move that involves a bit of sleight from his mother, Arjun meets Anjali (Ruhani Sharma).

The pellichoopulu turn out to be a curious affair as they were arranged only between the two of them in his apartment. Though initially reluctant and awkward around her, Arjun soon begins to feels a connect to Anjali and wants to get to know her, but she has no time for that kind of courtship since her mother (Rohini) suffers from bipolar disorder and is eager to get her married - Anjali wants either a yes or no from him to let her deal with it accordingly with her mother. Arjun can't say Yes immediately, but doesn't want it to be a No either, so he chooses to accompany her home that day as she leaves to take care of her mother who has just had an episode again and has been admitted to a hospital.

He drives her, guides her through the difficult times, tries to save her, and literally carries her through the night even as she can't seem to decide what to do with the "10-year-old" man-child. She's conscious of what she might be dragging him into, yet can't seem to stop herself from accepting his offers to help. Despite herself, she seems to be falling for the affectionate and decent guy, and as the difficult night gives over to a new day, she confesses her feelings to him. It is a neatly written scene, devoid of any dramatics associated with proposal scenes, which is why it rings true.

The strength of Chi La Sow lies in its simplicity and its relatable characters. Arjun is someone with whom a lot of youngsters can identify. Anjali walks into the film with the weight of the world on her shoulders, a girl who was forced to become a woman at a very young age, and a woman who wants to smile more often than she needs to frown. Like we said, a woman who has no time for love or courtship since she has more pressing matters at hand. Even when her behaviour towards Arjun seems like she is over-reacting and unnecessarily haughty, the audiences can understand where she is coming from. It is a delicately written role, kind of Roopa of Anand meeting Sita of Godavari. The film revolves around her and derives its impetus from her character. In short, Anjali is the film.

Rahul Ravindran's script takes its time establishing the characters since he knows that it is important for us to know a bit about both his leads. He gently pushes the contrasting pair into the night and makes them travel together. For Arjun, it is a world that he has no idea how to navigate, having always been a doted upon son never knowing how problem is spelt. Anjali, on the other hand, is world-weary yet can't help loving his attention and company. The situations they face over the night are a bit contrived and cinematic, but you are always with the pair wishing the girl something that will cheer her and for the guy to realize that she's the one for him.

It helps the film that Sushanth, who seems to make sporadic appearances on the screen, doesn't seem to carry any baggage of being a star and submits himself easily to the role. He is genuine and likeable to be around with even if not particularly interesting. Ruhani Sharma makes a promising debut in an author-backed role. Her smile might not radiate the screen but you are glad whenever she gets to smile especially after knowing her. Her performance is tender and tough in equal measure, and with a lot of help from her director, she creates a memorable character. Vennela Kishore with his poker face and the slightly irritable drawl with which he delivers his dialogue, is always fun to have around. The supporting cast of Rahul Ramakrishna, Vidyullekha Raman and Rohini Moleti shine in their own moments yet never take the attention away from the leads.

Chi La Sow happens over a night, and so the cinematography is almost stylistically minimal, but in keeping with the requirement it feels just right. Prashanth Vihari's background score is a huge asset as it gently underscores each moment with a lilt and adds to the breeziness of it all. A special mention is also warranted for the art directors who get things right at Anjali's house.

Chi La Sow might not be the best date movie, but it isn't very far from it either.
Share. Save. Connect.
Tweet
CHI LA SOW SNAPSHOT 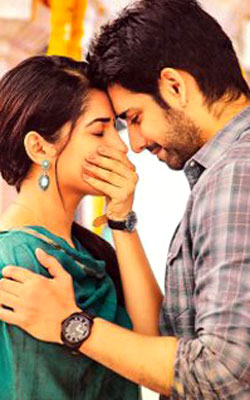 See Chi La Sow full details
CHI LA SOW USER REVIEWS
1 - 1 OF 1 COMMENTS
POSITIVE  |  NEGATIVE |  NEWEST  |  OLDEST  |  MOST HELPFUL  |  LEAST HELPFUL
Raghu M on 8th Aug 2018, 12:29am | Permalink
I wasn't sure in the first half hour if I was liking the movie, but as the time progressed, I got immersed into it and at the end I walked out with the feeling that "after a long long time, I watched two too good Telugu movies, back-to-back" (the other one being Goodachari).
However, I rate Chi La Sow a bit higher than (with due respect to)the other one.
"..you are glad whenever she gets to smile especially after knowing her.." - totally with you. When I saw her in the first frame on screen, I wished for a better (read better-looking) heroine. But, after "knowing her", I rooted for her, and of course loved her smile.
LEAVE A COMMENT
fullhyd.com has 700,000+ monthly visits. Tell Hyderabad what you feel about Chi La Sow!
MORE MOVIES
Latest Reviews
Red (Telugu)
Master (Tamil)
Master - 2021
Krack
12 O Clock
more
Solo Brathuke So Better
Bloodshot
Angrezi Medium
Baaghi 3
Palasa 1978
Sonic The Hedgehog
Kanulu Kanulanu Dhochaayante
Thappad
HIT
Kannum Kannum Kollaiyadithaa...
Contemporary Reviews
Goodachari
Mulk
Srinivasa Kalyanam
Vishwaroopam 2
Vishwaroop 2 (Hindi)
more
Vishwaroopam 2 (Tamil)
Geetha Govindam
Skyscraper 2018 (Hindi)
Skyscraper 2018 (Telugu)
Skyscraper 2018
Dhadak
Ant-Man And The Wasp (Hindi)
Ant-Man And The Wasp (Telugu...
Ant-Man And The Wasp
Random Reviews
Dongodi Pelli
Traffic
Spiderman (Telugu)
Tango Charlie
Husbands And Lovers
more
Plan
Badshah
Black & White
Night At The Museum 2 (Hindi...
Anjaana Anjaani
My Friend Pinto
Chakravyuh
Diana
Nee Jathaga Nenundali
Parasite (English)
SEARCH MOVIES
Dissatisfied with the results? Report a problem or error, or add a listing.
ADVERTISEMENT
SHOUTBOX!
{{todo.name}}
{{todo.date}}
[
ip{{todo.ip}}
]
{{ todo.summary }}... expand »
{{ todo.text }} « collapse
First  |  Prev  |   1   2  3  {{current_page-1}}  {{current_page}}  {{current_page+1}}  {{last_page-2}}  {{last_page-1}}  {{last_page}}   |  Next  |  Last
{{todos[0].name}}

ADVERTISEMENT
This page was tagged for
chi la sow telugu movie review
Chi La Sow telugu movie
Chi La Sow reviews
release date
Sushanth, Ruhani Sharma
Follow @fullhyderabad
Follow fullhyd.com on
About Hyderabad
The Hyderabad Community
Improve fullhyd.com
More
Our Other Local Guides
Our other sites
© Copyright 1999-2009 LRR Technologies (Hyderabad), Pvt Ltd. All rights reserved. fullhyd, fullhyderabad, Welcome To The Neighbourhood are trademarks of LRR Technologies (Hyderabad) Pvt Ltd. The textual, graphic, audio and audiovisual material in this site is protected by copyright law. You may not copy, distribute, or use this material except as necessary for your personal, non-commercial use. Any trademarks are the properties of their respective owners. More on Hyderabad, India. Jobs in Hyderabad.