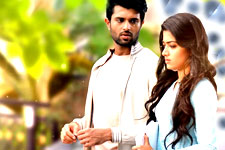 T J Reddy / fullhyd.com
EDITOR RATING
6.0
Performances
Script
Music/Soundtrack
Visuals
6.0
3.0
5.0
8.0
Suggestions
Can watch again
No
Good for kids
No
Good for dates
Yes
Wait to rent it
No
Welcome ladies and gentlemen to the romance event of this monsoon season. In the testosterone corner wearing very very manly clothes, coming off a very manly movie is Arjun Re... um, Vijay Deverakonda. And in the oestrogen corner, clad in both traditional outfits and modern garb and coming off a successful film in her own right, is Rashmika Mandanna. Their war against each other in the movie is incited by an inappropriate action, and it must be fought in a lower key than usual because Vijay's sister and Rashmika's brother are engaged to be married to one another. Enough setup. Let's get ready to romance!

Oh my God! What an event it was. It had laughs. It had emotions. It had songs. It had an even mixture subverted expectations and reinforced clichés. It was well and truly a roller coaster that left us moderately amused by the time the end credits rolled. However, while the pretty people fell in love with each other, we couldn't truly fall in love with them or their story.

We are crabby old geezers now and blank pretty faces don't do it for us anymore. Our time on this blue and green, carbon-based planet is limited, and we want to spend our precious minutes genuinely getting to know people. What are their characteristics, hopes, dreams, fears and desires, and most of all why do we as an audience need to care about any of those things?

Writer/director Parasuram has a few cards up his sleeve to make his movie appealing. He casts the magnetic Vijay Deverakonda and has him play a role which is seemingly the antithesis of his turn as Arjun Reddy. Vijay Govind (Vijay Devarakonda) is a soft-spoken, gentle, even-tempered lecturer that refuses to let his male ego get the better of him. Then again comparing Arjun Reddy to Vijay Govind is akin to judging a fish by its ability to climb a tree (thanks, Einstein). Govind's actual peer is Pelli Choopulu's Prashanth. A well-rounded character who evolves over the course of the film's events to understand himself and what he wants from his soul mate to a higher degree. He shuns an obscene amount of wealth and the easy life he always desired to instead run a food truck with a woman who is the yin to his yang.

Vijay Govind is introduced to us as a white-meat do-gooder who stalks women for months on end instead of talking to them and expressing his feelings. He has an idea of what he wants from a woman after watching Bharateeyudu (Indian) a few hundred times, but fails to see that the level of connection shared between the old couple is a result of years of communication and bonding. He is decent enough not to kiss a sleeping woman, but still thinks taking a picture with her without her consent is a-okay. Has he not seen Venky? Doesn't he know what goes around comes around?

His beliefs are rarely challenged, and his worldview is unmoved through the course of his journey, and this lack of an arc makes him nothing more than window dressing. Devarakonda infuses a stale character with likability because he can. His charm is effortless, his screen presence is commanding, and watching him take leaps of faith in service of the story being told helps the audience to lend out a hand to keep him from falling to his doom.

The same cannot be said of Mandanna's Geeta. Her character has two modes - angry and in love. The tissue that connects these two modes is as wafer-thin as the plot itself, and the film rarely peels her character back enough to let us know why she deserves a happy ending. She lacks agency, and is a passenger who does what the script needs her to do. This is prevalent to such a degree that she could have avoided Vijay for the entirety of the film and that would have made logical sense even if it would have crippled the narrative and kept the length of the film under 30 minutes.

Mandanna isn't seasoned enough to carry under-written roles, and a lack of comedic and character actors around her does little to mask her shortcomings. Rahul Ramakrishna is not afforded the chance to be the one who brings balance to his friend's life, and neither is Vennela Kishore given the opportunity to flex his acting range a la Goodachari. They are entertaining as stand-ins for Sunil and Ali, but these men have more to offer and so do the terribly underutilised Subbarju and Annapoorna.

However, performing to the best of his abilities is composer Gopi Sundar. The man who crafted inimitable scores and songs for Pulimurugan, Bangalore Days, Ustad Hotel etc. produces his first truly memorable Telugu score and soundtrack. The score is rarely overbearing, and the songs convey more about the budding romance than the writing ever does. The movie however almost taints this aspect of itself with some truly bizarre editing choices and scene transitions. The fundamentals of filmmaking are swept aside to give the film a unique look and feel, but these choices rarely show the film in a positive light.

The directing choices are a small-scale version of the movie as a whole. It is old wine masquerading in new bottles left in the hands of a bartender fumbling to pop open the corks and let the good times flow. The lead duo being easy on the eyes and the funny lines they spout being easy on the ears are what save Geeta Govindam from being wholly forgotten as a run-of-the-mill rom-com that neither romances nor amuses nor offends to its fullest extent.
Share. Save. Connect.
Tweet
GEETHA GOVINDAM SNAPSHOT 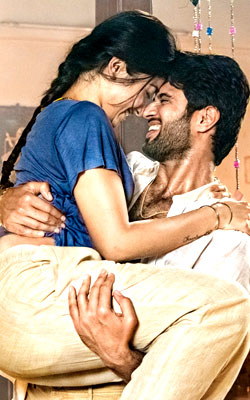 See Geetha Govindam full details
GEETHA GOVINDAM USER REVIEWS
1 - 3 OF 3 COMMENTS
POSITIVE  |  NEGATIVE |  NEWEST  |  OLDEST  |  MOST HELPFUL  |  LEAST HELPFUL
USER RATING
5.5
2 USERS
Performances
Script
Music/Soundtrack
Visuals
1.0
1.0
7.0
2.0
Can watch again - No
Good for kids - No
Good for dates - No
Wait to rent it - No
KD on 20th Aug 2018, 12:53pm | Permalink
This is one of better romcoms among the recent telugu movies. Though nothing great, it was a completely enjoyable fare.
The 6.0 rating by fullhyd doesnt justity either. This is a 7.0 purely for the performances of the lead pair.

Maybe fullhyd doesnt want to bear the brunt of Mega fans by being overtly critical
The Common Movie Goer on 19th Aug 2018, 3:13pm | Permalink
SPOILERS AHEAD, DIATRIBE AHEAD, VITRIOL AHEAD

Dear god! This was, hands down, one of the worst movies I've seen in recent times. To quote Vegeta, the cringe factor was over 9000. I cringed and writhed in embarrassment from start to finish. What was the director thinking? Ee lanti cinemalu theesi, sabhya samajaniki em message iddam ani (what message are you trying to convey through movies like this)? That stalking and taking women's rights for granted will help you "get the girl?" Or that behaving like a whiny sissy will be endearing? As you pointed out, TJ, Arjun Reddy was full of toxic masculinity, which I completely hated. This tried to be the opposite, but didn't feel any better.

There was so many scenes where people behaved without any common sense? Jumping out of buses, selfie with a person who is sleeping in a tight corner, stalking women for months on end and staging some stupid fight to get to know the other person's opinion, going out with your sexual harasser to buy some clothes, etc.. Treat the other person like a human with feelings, for god's sake. And, of course, the movie had to have the bakra groom / bride whose feelings can be tossed into the garbage since they aren't good friends with the director.

Even the technical aspects and acting sucked. Vijay Devarakonda's diction needs to improve ASAP. You can't have the laid back dialogue delivery in every movie. The no. of "Madam"s got on my nerves. The editor was clearly asleep when he was editing this. No wonder some scenes "were leaked" or whatever. The green screen while they were driving was terrible. The re-recording was worse, and I am pretty sure it was ruined by the editing. It provided the wrong emotional cues and was too abrupt in nature.

Oopiri has a special place in my heart, and so does telugu Premam. I think those are the best examples of Gopi Sunder's work. The guy was weaving magic with his tunes in those movies.

Except fullhyd, I think all reviewers are completely losing integrity when it comes to reviewing films. They need to take a hard look at themselves and ask if they truly appreciate filmmaking when they write good stuff about tripe like this. Of course, one can easily argue that it is I who have gotten things wrong. That is the beauty of art and cinema, but I truly believe it when I say this was complete crap and utter nonsense stitched together because people involved thought to themselves, "what the hell, let's give it a shot."

Never ever watching a Parasuram film again. Should've learned my lesson with Solo and Sarocharu. I must be a glutton for punishment.


Pros: Couple of songs (audio only)
Cons: Everything except for a couple of songs that are easy on the ear
RATING
1
megastar on 22nd Aug 2018, 3:01pm | Permalink
1. Ooiri is a blatant lift of the french movie. 2. Fullhyd gets so many movies wrong too(if they can be called movies in the first place). 3. Most of the Telugu movies do not deserve any review at all.4. Bulk of the Indian audience have an 'abnormal' 'sick' aesthetic that is several several notches below the acceptable aesthetic of any people anywhere in the world hence the garbage.
WhyThisMovieaHit on 19th Aug 2018, 4:19am | Permalink
My thoughts in writing-- Amazing Review TJ-- I feel like, this is probably the only critical review of this movie on the internet
LEAVE A COMMENT
fullhyd.com has 700,000+ monthly visits. Tell Hyderabad what you feel about Geetha Govindam!
MORE MOVIES
Latest Reviews
Bangaru Bullodu
Madam Chief Minister
Red (Telugu)
Master (Tamil)
Master - 2021
more
Krack
12 O Clock
Solo Brathuke So Better
Bloodshot
Angrezi Medium
Baaghi 3
Palasa 1978
Sonic The Hedgehog
Kanulu Kanulanu Dhochaayante
Thappad
Contemporary Reviews
Neevevaro
@Nartanasala
Ko Ko Kokila
Stree
Care Of Kancharapalem
more
Manu
The Nun (Hindi)
Vishwaroopam 2 (Tamil)
Vishwaroop 2 (Hindi)
Vishwaroopam 2
Srinivasa Kalyanam
Mulk
Goodachari
Chi La Sow
Random Reviews
Dinosaur (Hindi)
Okkadu Chaalu
Aaduthu Paaduthu
Nenu Pelliki Ready
The Scorpion King
more
A Film By Arvind
Day Of The Woman (I Spit On ...
Okka Magaadu
Agyaat
Aakrosh
The Three Musketeers
Skyfall
About Time
Teenage Mutant Ninja Turtles
Fantasy Island
SEARCH MOVIES
Dissatisfied with the results? Report a problem or error, or add a listing.
ADVERTISEMENT
SHOUTBOX!
{{todo.name}}
{{todo.date}}
[
ip{{todo.ip}}
]
{{ todo.summary }}... expand »
{{ todo.text }} « collapse
First  |  Prev  |   1   2  3  {{current_page-1}}  {{current_page}}  {{current_page+1}}  {{last_page-2}}  {{last_page-1}}  {{last_page}}   |  Next  |  Last
{{todos[0].name}}