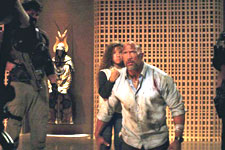 T J Reddy / fullhyd.com
EDITOR RATING
3.0
Performances
Script
Music/Soundtrack
Visuals
4.0
1.0
2.0
4.0
Suggestions
Can watch again
No
Good for kids
No
Good for dates
No
Wait to rent it
Yes
In our long and storied history of filmgoing, we've only ever watched a handful of great parodies. Classics such as Airplane, Spaceballs, Hot Shots and, to an extent, The Cornetto Trilogy form the pillars on which the parody genre stands proud. But what if I told you a film that came out in 2018 is on the cusp of giving those genre-defining masterworks a run for their money? It is a film that expertly wades through the inconsistencies of The Towering Inferno, Die Hard and movies that play on our inherent sympathy for the family men / wounded police officers and subverts every single expectation we have from a comedy all at the same time. Lovable Leslie Nielsen has finally met his match and he comes in the form of The People Champion - The Rock.

Ladies and gents, we are being informed that this film is not a parody. It is, in fact, an action movie where a former FBI agent turned security expert (Will Sawyer played by Dwayne Johnson) attempts to save his family from a burning building. A building three times the size of the Burj Khalifa at that because if it's an American movie you'd better be damn sure that size matters.

Skyscraper takes you back to the bygone era when chest-thumping heroes defeated small armies of men with nothing more than determination and elbow grease. Before The Rock became The Most Electrifying Man In All Of Entertainment, he used to be Rocky Maivia. A tassel-clad, pineapple-perm-sporting goofball the fans booed out of arenas week in, week out. Skyscraper is the Rocky Maivia of films starring Dwayne "The Rock" Johnson. It is a factory-made, four-quadrant-pleasing summer blockbuster without a shred of personality, backed by a marketing juggernaut and the Chinese box office. The fact that the film is set in Hong Kong and "pays homage" to Enter The Dragon is no accident. It's akin to Rocky Maivia paying homage to his heritage in a transparent ploy to earn goodwill from a cynical crowd. Not until he cut loose and put his charisma on full display was he taken seriously as a performer with any semblance of appeal. The Rock commanded attention simply because he never pandered for it unlike his old self. Skyscraper revisits the Rocky of yore and reminds us of a time when we disliked his presence.

To his credit, however, Will Sawyer gets at least three lines of character written for him. Loving father. Handi-capable former FBI agent. And the brightest lightbulb in a room filled with ones that are broken. (Oh, also a man whose bionic leg is an inconvenience when he walks but miraculously heals when he runs.) However, every character who isn't him gets gradually less compelling. Take his family, for example - his wife Sarah (Neve Campbell) is a doting mother and former marine doctor, his son Henry (Noah Cottrell) is an asthmatic kid and his daughter Georgia (McKenna Roberts) is a girl and not much else. The writing aimed at the villains isn't much better either, and this is where we collectively realize that no amount of charisma and star power can make up for a bad script.

But this isn't a clinic of dramatic acting damn it, it is a visual spectacle tailor-made for the summer. If your idea of a visual spectacle is watching close-ups of The Rock's face with digitally added embers and ash in the background, that is. The green screen effects are laughably bad from time to time, and the music isn't faring much better either. Composer Steve Jablonsky is a staple of the Michael Bay Transformers franchise, and the overproduced and underwhelming music that underscores that franchise is present and underwhelms here as well.

The scene where The Rock tethers himself to a wooden post and scales the building with duct tape wrapped around his hands and feet might be the perfect microcosm of the movie on a whole. Where Mission Impossible: Ghost Protocol had high-tech gadgets and harnesses to scale the Burj Khalifa, Skyscraper has garden-variety tools you'd find in your cabinets to scale a building thrice the size. The bigger they are the dumber they get, and The Rock says as much in a profoundly self-aware split second. We couldn't agree more.
Share. Save. Connect.
Tweet
SKYSCRAPER 2018 (HINDI) SNAPSHOT 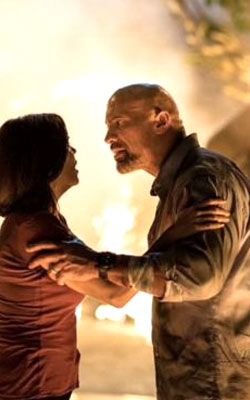 ADVERTISEMENT
This page was tagged for
skyscraper movie in hindi
Skyscraper full movie in Hindi
Sky scrapers full movei in hindi
skyscraper full movie in hindi
Skyscraper 2018 full movies in hindi
Follow @fullhyderabad
Follow fullhyd.com on
About Hyderabad
The Hyderabad Community
Improve fullhyd.com
More
Our Other Local Guides
Our other sites
© Copyright 1999-2009 LRR Technologies (Hyderabad), Pvt Ltd. All rights reserved. fullhyd, fullhyderabad, Welcome To The Neighbourhood are trademarks of LRR Technologies (Hyderabad) Pvt Ltd. The textual, graphic, audio and audiovisual material in this site is protected by copyright law. You may not copy, distribute, or use this material except as necessary for your personal, non-commercial use. Any trademarks are the properties of their respective owners. More on Hyderabad, India. Jobs in Hyderabad.