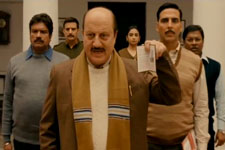 Nupur Barua / fullhyd.com
EDITOR RATING
7.0
Performances
Script
Music/Soundtrack
Visuals
8.0
6.0
4.0
8.0
Suggestions
Can watch again
Yes
Good for kids
Yes
Good for dates
Yes
Wait for OTT
No
A heist movie set in a period - the premise itself is promising. Add to that the director who gave us A Wednesday, and film buffs are certain to run to the theatres on the first day of the movie's release. The Hindi film industry is otherwise not known for its expertise in authentic period pieces, despite the number of historicals in the history of Bollywood.

Special 26 is set in a period that some of us still remember - 1987 - which is why the makers are very careful about the way they portray that world. A group of four men, spearheaded by Ajay (Akshay Kumar), barge into a minister's house in Delhi. They claim to be from the CBI, and, to add to their credentials, they are accompanied by a few policemen.

After the raid, leaving Senior Inspector Ranvir Singh (Jimmy Sheirgill) and lady constable Shanti (Divya Dutta) in charge of the minister's house, the CBI team disperses. It does not take much time for the minister and the police to realise that they have been had. Ranvir Singh and Shanti are suspended, largely for being so stupid.

Wasim Khan (Manoj Bajpayee) is a real/genuine CBI officer. He makes the acquaintance of Ranvir Singh, and together, they investigate the fake CBI team. Will they catch the fraudsters red-handed, as per plan?

Neeraj Pandey has picked an unconventional and interesting plot to work on. He has fictionalised certain aspects of the story, and has even put in a disclaimer about fictitious characters, but this actually happened. Tribhovandas Bhimji Zaveri at Opera House in Mumbai was robbed of lakhs of rupees in jewellery, on March 19, 1987.

The characters are introduced doing what they do best - robbing. The screenplay then goes into their respective personal lives, to give us a glimpse of what they are all about. Joginder (Rajesh Sharma) lives in a big joint family. Iqbal (Kishor Kadam) is a henpecked husband. P K Sharma (Anupam Kher) has many mouths to feed. And Ajay is in love with his neighbour.

Ajay and PK know how risky their profession is, but strangely, the desperation to turn over new leaves does not come across in their conversations. Neeraj Pandey then inserts an insipid romance that is nothing but an irritating distraction.

Then, there are the unnecessary shots of the fraud team walking in slow motion from one place to another. All these irrelevant elements make the movie drag a bit.

What the director could have concentrated on was crisp editing. The screenplay works most of the time. It is a simple plot - a couple of heists, a fuming investigator, one big job, and a huge twist - in the days of black-and-white television and the absence of cell phones. However, it just takes ages to go from one plot point to another.

Again, in its defence, there is no mindless action, and no violence, which gives this movie a fresh look and feel, as opposed to the mass-produced masala movies that we are subjected to so often these days.

The movie scores in terms of performances, cinematography and production design. Bobby Singh, who shot the movie, unfortunately died before its release, but had he lived, he would have been glad to know that he is the silent hero here. Some of the shots are unforgettable.

Of course, the makers had to keep in mind the era that the story is set in, so you will see nothing but Ambassadors, Marutis and Fiats on the streets, for example. If only the costume design had complemented the production design (dhoti salwars were very in, in 1987, for example, but there is no reference to them in scenes where women wear salwar suits), Special 26 would have been a perfect visual treat.

The actors make the movie worthwhile. Akshay Kumar, in a deviation from his comic playboy avatars, is a joy to watch. He looks older, though. Anupam Kher is flawless.

Manoj Bajpayee has just raised the bar for himself (and one thought he could not better Gangs Of Wasseypur) - his introductory chase sequence is jaw-dropping.

Jimmy Sheirgill does a decent job, as does Divya Dutta. Kishor Kadam and Rajesh Sharma have less freedom with their roles, but they deliver.

Despite its length, dull moments and scenes without dialogues, Special 26 is a must-watch. It has set a certain standard for period films, to begin with, and its dry sense of humour evokes involuntary chuckles every now and then. If only it had better music and no Kajal Aggarwal!
Share. Save. Connect.
Tweet
SPECIAL 26 SNAPSHOT 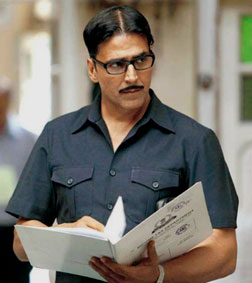 ADVERTISEMENT
This page was tagged for
special 26 movie english subtitles for hindi
special 26 movie 11
special 26 movie
Special 26 hindi movie
Special 26 reviews
Follow @fullhyderabad
Follow fullhyd.com on
About Hyderabad
The Hyderabad Community
Improve fullhyd.com
More
Our Other Local Guides
Our other sites
© Copyright 1999-2009 LRR Technologies (Hyderabad), Pvt Ltd. All rights reserved. fullhyd, fullhyderabad, Welcome To The Neighbourhood are trademarks of LRR Technologies (Hyderabad) Pvt Ltd. The textual, graphic, audio and audiovisual material in this site is protected by copyright law. You may not copy, distribute, or use this material except as necessary for your personal, non-commercial use. Any trademarks are the properties of their respective owners. More on Hyderabad, India. Jobs in Hyderabad.