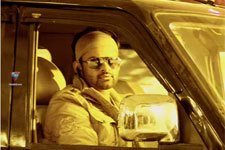 Josh / fullhyd.com
EDITOR RATING
2.5
Performances
Script
Music/Soundtrack
Visuals
5.0
3.0
5.0
6.0
Suggestions
Can watch again
No
Good for kids
No
Good for dates
No
Wait to rent it
Yes
It's a lousy film. You all know that already. And this is a late review - we wonder if the film will be playing in the theatres by the time this review goes up. We have little to no idea on what to write at this moment. After some deliberation, we supposed all the people who are uninterested in this film may have questions that they wouldn't care to ask. This reviewer will now exercise his imagination in identifying some of these Fully Unasked Questions (FUQs) and respond to them in Answers of Strict Solemnity (ASS).

FUQ 1: What's the plot of Nakshatram?
ASS: On the face of it it's about Sundeep Kishan wanting to become a cop and Sai Dharam Teja being a supercop and Prakash Raj collecting a remuneration for turning up on the sets and wearing a cop's uniform. There's also Sai Teja's driver and this driver's daughter Regina who is a junior artiste and is in love with Sundeep Kishan whose mother insists on her son being a cop like his father and his grandfather and his great-grandfather. Before we forget, there's a thief Pragya who steals mobile phones and does parkour but later is not a thief but a cop hunting for a bombs-and-drugs-supplier who is good friends with Prakash Raj's son.

Hmm... if we have to be honest, we'll tell you they were really just plotting to mentally decapacitate all the single digit number of viewers in the hall.

FUQ 2: Single digit?
ASS: Seven of us left the hall. We didn't know if we had to check for corpses.

FUQ 3: But seriously, wasn't there something to do with drugs in the plot?
ASS: Now, that's a thought. If the SIT watched Nakshatram they'd likely let go of Puri Jagannadh and go after Krishna Vamsi. Their obvious line of questioning would be how on earth he could have made a film so loudly and glitzily disorienting without having been under the influence of some hallucinogenic elements.

FUQ 4: Okay. So the production values and so on are all bad?
ASS: Bad, you see, is of multiple kinds. Sometimes it's just plain bad because there's nothing of value in the mix. But at other times, even when the things in the mix are of good quality, the mixie can mess it up for you. The music may be okay and the cinematography interesting and the performances earnest, but the end effect is like having an ADHD kid explain the script of The Transformers.

FUQ 5: The performances are good, then?
ASS: Good, you see, is of multiple kinds. Sometimes it's good when you can watch a performance and believe the actor. But at other times, everything is so loud and garish and mixed up, and you start feeling sorry for the actors who have no control over what they are doing because their director has no control over what he's doing. So the end effect is you tend to be sympathetic to them and think they're good enough.

FUQ 5: The women? They have meaty roles?
ASS: They have roles, yes. Meat, yes. Meaty roles? No. Meat rolls? The rest of this ASS shall be terminated as it may not comply with fullhyd.com's standards.

FUQ 6: I understand how the film is mediocre from a critic's standpoint, but my only question is if it's good for the common audience? Like, would I enjoy it if I walked in with zero expectations?
ASS: Let's get this correct. You can't have expectations for Nakshatram because try as you might it'll go beneath your expectations. Secondly, we're all in the same boat here irrespective of whether we are critics or common viewers. Unless we consider the uncommonly critical RGV (who congratulated Krishna Vamsi for being on the "right path"), there's possibly not a soul who wouldn't feel like someone's stepping on their oxygen supply.

FUQ 8: But why do talented directors do this? What happens to them?
ASS: This reviewer was plagued with this very question and is contemplating a Ph D in neuropsychology to understand this phenomenon. But we understand that we may not be allowed to rip open their skulls and poke electrodes into their brains. Worse, in case we manage to get there, we may have the temptation to not sew those heads back again and save ourselves from films such as Nakshatram. Which is why we may have to let go of the Ph D and this question.

FUQ 9: So, the verdict is?
ASS: If you haven't understood it yet, maybe you deserve to watch this film.
Share. Save. Connect.
Tweet
NAKSHATRAM SNAPSHOT 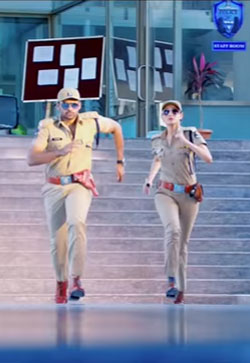 Fidaa was overrated AF (ASS-FUQ?), wasn't up to Godavari levels. SPYder and Paisa Vasool (Obligatory "Jai Balayya"!!!) look like duds from the teasers. All hopes on VIP 2 (I've said this a hundred times already, Raghuvaran BTech. deserved 10/10) and Dhruva Nachatiram. Don't know why, but Jaya Janaki Nayaka looks great (loved Alludu Seenu!). However, given that it's coming from the guy who made Sarrainodu, this could be the worst movie of all time.

Did anybody watch the making video for Jaya Janaki Nayaka? Like Satyam Rajesh says in Baadshah, "cinema making kanna mee making ekkuva ayyindi." Which makes me wonder if Kona Venkat is some sort of Prophet. The same movie has Kajal Agarwal explaining the plot of Sreemanthudu before it was even made.

I gave up on Krishna Vamsi after Samudram.

-Hari.
Josh on 8th Aug 2017, 9:25am | Permalink
I'm personally very fond of Khadgam, Hari. Murari as also after Samudram. But yeah, nothing apart from these two.
JayZ on 8th Aug 2017, 2:31pm | Permalink
I never liked Krishna Vamsi.He makes loud cringeworthy films. He has zero respect to his heroines.He makes them dance around in bikinis, he makes his heroes grope them and sexually harass them in the name of wooing. And then preaches the greatness and of women.. hypocrite.
Kanye on 7th Aug 2017, 10:09pm | Permalink
One of these lines look awfully familiar...

ADVERTISEMENT
This page was tagged for
Nakshatram telugu movie
Nakshatram reviews
release date
Sundeep Kishan, Regina Cassandra
theatres list
Follow @fullhyderabad
Follow fullhyd.com on
About Hyderabad
The Hyderabad Community
Improve fullhyd.com
More
Our Other Local Guides
Our other sites
© Copyright 1999-2009 LRR Technologies (Hyderabad), Pvt Ltd. All rights reserved. fullhyd, fullhyderabad, Welcome To The Neighbourhood are trademarks of LRR Technologies (Hyderabad) Pvt Ltd. The textual, graphic, audio and audiovisual material in this site is protected by copyright law. You may not copy, distribute, or use this material except as necessary for your personal, non-commercial use. Any trademarks are the properties of their respective owners. More on Hyderabad, India. Jobs in Hyderabad.