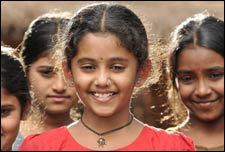 Deepa Garimella / fullhyd.com
EDITOR RATING
5.0
Performances
Script
Music/Soundtrack
Visuals
8.0
5.0
9.0
7.5
Suggestions
Can watch again
No
Good for kids
No
Good for dates
Yes
Wait for OTT
Yes
The first half of Rajanna is an extraordinarily compelling Keeravani folk musical, starring an exceptionally talented child called Baby Annie (who has clearly been told to hyperventilate a lot, but is talented, nevertheless), that paints the sufferings of an Adilabad village in the hands of its evil dorasani.

The second half of the film is a cold-blooded, calculated murder of the first half.

This part-fictional adaptation of the heroics of a Telangana freedom fighter begins with how an abandoned little baby is brought up by an elderly thatha in a little hamlet in Adilabad. The toddler grows up to be a spirited, cheerful little girl Mallamma (Baby Annie), brimming over with innocence. She has little idea that she is the daughter of Rajanna, a hero whose ashes are worshipped by everyone in the area.

Looming large over this village, and over many like it, is the presence of the feudal lords of the territory - who demand both taxes and obeisance from the commoners. One fateful day, the cherubic Mallamma is subjected to a dangerous and frivolous whim of just such an evil dorasani (Shwetha Menon), and the child is perplexed and broken.

Mallamma's story is brilliantly written, and equally brilliantly executed. Hers is the character that seems to have gotten the most attention from the movie's writers, who endow her with the nuances you'd expect if you were to read this as a novel. The thatha who takes care of her has an amazing role to play as well.

And maybe this detailing is the reason Rajanna's entry and subsequent freedom-fightery seems so bland. First of all, for those of us who're expecting this to be a Nagarjuna film, here's the bad news: his entry takes place only a few minutes before the interval, when Mallamma is being narrated the flashback of her existence as an embryo.

Secondly, Rajanna's clashes with the evil rulers - whether British, or post-1947, local - lack punch. He fights a little, and he inspires people to fight a lot, but there's only plenty of blood-letting going on. No memorable dialogues, no heart-rending emotion. All this was indeed achieved by Mallamma earlier, by the way.

And basically, the movie only shows us the trials and tribulations of one village. What about the people's other problems? In fact, Rajanna even acknowledges in one scene that there are other villages waiting to be freed from oppression, but we never get to see what the larger picture is.

In the end, the movie gets to a stage where it's all about a music competition (Mallamma happens to be a good singer) that Jawaharlal Nehru will attend. The events that build up to this moment are unrealistic and over-dramatized.

However, the cast doesn't disappoint, and the Telangana accents are all spot-on. Baby Annie is charming, as we have noted, and the gentleman playing her grandfather puts in a moving performance. Nasseer is woefully misused, though. Nagarjuna, too urbane for the role, is kind of a misfit, but the star presence sure helps despite the badly-written character.

And it's good to see Sneha back, even if in a limited role. We'd have loved to see more of Telangana Sakuntala - why exactly was she around for only a few minutes?

The production design is impressive for the most part. Mallamma is never glamourized, and is made to look as rustic and ordinary as it gets. And that doesn't just mean the lack of lipstick - the grime on her face, her braided stringy hair (normal to women south of the Vindhyas) and her red ribbon are quite endearing simply because it's all authentic. Other characters are dressed with similar care, and the villages are picturesque and green. However, fights take place in studio settings, and are unconvincing.

Keeravani's music for offbeat movies usually elevates these productions to a different plane, and Rajanna is indeed an example of this fact. The folk numbers and the background score are all soulful.

Rajanna was heading towards being a masterpiece, but its derailment is a little hard to forgive.
Share. Save. Connect.
Tweet
RAJANNA SNAPSHOT

lot of drama frm this girl . . a boy would have been a bettr option than gal
i could not relate to this gal at all
pradeep- on 7th Jan 2012, 2:02am | Permalink
I have a tendency to read a review only when i decide not to watch a movie or any movie . .

it is difficult to find nice criticsz i think .. almost difficult i think . .
anon critic on 24th Dec 2011, 8:07pm | Permalink
Xcellent review, xcept few points. 1) To say that 2nd half is calcted mrdr is strtching too far. 2nd half has its moments, a responsible review site will do well to not make such xtreme stmts. Yes Nag's char is not well written and yes, we cud hv done with more of telngna shkntla.


This movie is both a treat and an embrsmnt to Nag's fans in equal measure. His detractors (read the caste/family based fanbase of his competitors - ntr/chiranjeevi fans) will summarily dismiss this movie. It is the sane minded neutral people of AP who hv to decide the fate of this in the long run.

The biggest problem was the lack of ambition by the makers, big thinking was missing. This cud hv been a lagaan or rdb or even a slumdog, with right ambition.

Subjct had so much promise, xpectations were further high with nag's brillnt pre-rlse narration of the story. But in the end, most exprncd vwrs may belv they cud hv done a btr job of mkn this movie

ADVERTISEMENT
This page was tagged for
Rajanna telugu movie
Rajanna reviews
release date
Nagarjuna Akkineni, Baby Annie
theatres list
Follow @fullhyderabad
Follow fullhyd.com on
About Hyderabad
The Hyderabad Community
Improve fullhyd.com
More
Our Other Local Guides
Our other sites
© Copyright 1999-2009 LRR Technologies (Hyderabad), Pvt Ltd. All rights reserved. fullhyd, fullhyderabad, Welcome To The Neighbourhood are trademarks of LRR Technologies (Hyderabad) Pvt Ltd. The textual, graphic, audio and audiovisual material in this site is protected by copyright law. You may not copy, distribute, or use this material except as necessary for your personal, non-commercial use. Any trademarks are the properties of their respective owners. More on Hyderabad, India. Jobs in Hyderabad.