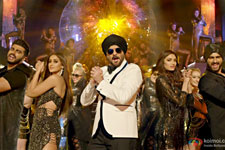 Raghav Venkat / fullhyd.com
EDITOR RATING
2.5
Performances
Script
Music/Soundtrack
Visuals
3.0
2.0
2.0
4.0
Suggestions
Can watch again
No
Good for kids
No
Good for dates
No
Wait for OTT
Yes
July has seen two Hindi movie releases based in London - Guest in London and now Mubarakan - and both of them try to stick to stereotypes made prevalent by the film industry over the years: Punjabis, rags-to-riches-stories and flashy children being just a few of them. And the aerial shots of London in this one are so similar to those in Guest In London, you almost wonder if they used the same footage to split costs. Thankfully, the plots aren't similar.

The twins are similar, yet different; while both are meek around their foster parents, Karan is trendy, boisterous and an extrovert, while Charan is submissive, shy and introverted. They have love lives that their parents are unaware of, and to get their respective parents to know, they seek the help of their uncle, Kartar Singh (Anil Kapoor). But Singh's penchant for seeking the help of things around him (vegetables, shoes, whiskey, soda, ice etc.) makes life difficult for the twins.

Anees Bazmee, going by his filmography, is a poor man's Srinu Vaitla. He packs his films with characters and expects that to do the trick. But he doesn't have a Brahmanandam in Bollywood to bring back his movies from the dead. He should've realized it with Ready, but it looks like it will take more time for it to sink in. He manages to package his movies with a star, and this one shows how hollow his films are without one.

Indeed, Mubarakan has "dull" slathered all over it. Right from the first scene you seem to be able to guess what's going to happen next. For most directors a script like that can be a nightmare, but Bazmee treats it as a minor impediment. And his staunch desire to stick to stereotype pulls the movie down further. That a director can convince actors of the calibre of Ratna Pathak Shah and Pavan Malhotra to act in his film and wastes the chance with brazen disregard for their acting capabilities is hard to fathom.

In a short career of nine movies, Arjun Kapoor has played dual roles twice. That would be a feather in most actors' caps, but it is not in Kapoor's. The differences he is able to show in the characters are minimal - the attire is the only thing that helps you in differentiating between the twins, and that is not good news for Arjun Kapoor, the actor. With "nepotism" being the theme of the month in Bollywood, it won't be far-fetched to imagine that this film was a collaborative effort of Sanjay Kapoor and Anil Kapoor to resurrect the flagging career of their nephew. The one thing that's good with Arjun Kapoor is the ability to merge the reel with the real - remember the memes that came up during the pre-release tours of Half Girlfriend? One can say he is playing along with it. Now if only he showed the same zest for acting.

Kapoor is still only one of four actors in the film who don't redeem themselves with their performances, the others being Ileana, Athiya Shetty and Neha Sharma. It's a pity then that these are lead actors of the movie.

Ileana said that one of the main reasons for her moving out of the Telugu film industry was the lack of roles with substance, and it then looks like she had accepted this film whilst still working in Tollywood. The role has neither any importance nor any substance.

Athiya Shetty has nothing much to do apart from wearing a frown on her face. Neha Sharma has a similar role in length and presence, and you wonder why she is credited with a guest appearance while Shetty is mentioned in the starring credits.

Anil Kapoor, Rachana Pathak Shah and Pavan Malhotra trudge through their roles before they all come into their own in the climax. How Anil Kapoor continues to act in Anees Bazmee's movies despite the mediocre roles offered to him will remain a mystery. He plays a comic character in this film, but does everything except elicit laughter.

The music in the movie is as average as the movie itself. The remixed version of "Hawa Hawa" has you seething at how a good song has been destroyed. And while certain frames do look good, the cinematography isn't uniform throughout the movie. The writer and the director don't seem to have invested time in the film, and it shows. Also, when one shoots abroad there usually are scenes at the same place given the budgetary implications, but going for an overkill of the same place can be detrimental. In a wafer-thin plot, the oft-seen sights can be an eyesore. Bhagam Bhag, another movie shot primarily in London, did a good job of showing the abstruse areas of the city.

The only people to emerge from this wreckage with respect are the assistant directors. They ensure continuity and their attention to detail is the only thing that prevents this movie from being a full-blown disaster.

If the makers of Mubarakan were trying to appeal to Punjabis, it's worth asking if this one would've been a good movie in Punjabi. The answer, alas, would be categorical.
Share. Save. Connect.
Tweet
MUBARAKAN SNAPSHOT 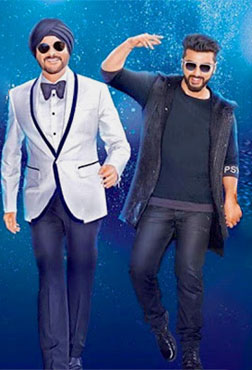 ADVERTISEMENT
This page was tagged for
Mubarakan hindi movie
Mubarakan reviews
release date
Anil Kapoor, Arjun Kapoor
theatres list
Follow @fullhyderabad
Follow fullhyd.com on
About Hyderabad
The Hyderabad Community
Improve fullhyd.com
More
Our Other Local Guides
Our other sites
© Copyright 1999-2009 LRR Technologies (Hyderabad), Pvt Ltd. All rights reserved. fullhyd, fullhyderabad, Welcome To The Neighbourhood are trademarks of LRR Technologies (Hyderabad) Pvt Ltd. The textual, graphic, audio and audiovisual material in this site is protected by copyright law. You may not copy, distribute, or use this material except as necessary for your personal, non-commercial use. Any trademarks are the properties of their respective owners. More on Hyderabad, India. Jobs in Hyderabad.