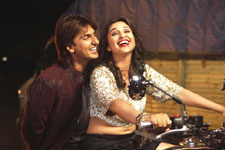 Nupur Barua / fullhyd.com
EDITOR RATING
5.0
Performances
Script
Music/Soundtrack
Visuals
7.0
4.0
6.0
6.0
Suggestions
Can watch again
No
Good for kids
No
Good for dates
Yes
Wait for OTT
Yes
Everybody deserves a second, or third, or fourth, or nth chance. Humans err, and that is a part of the learning process. Except that Shaad Ali, who kept away from the public eye since the reviews of Jhoom Baraabar Jhoom came out, does not seem to have learned much in all these years of reflective retirement. Actually, no, he has - the most important lesson he can probably impart is on how to convince Yash Raj Films to give people second, or third, or fourth, or nth chances. With his latest directorial venture, titled Kill/Dil, Shaad Ali may be laughing all the way to the bank, but you are left wondering what YRF was thinking.

Kill/Dil - the slash says it all. In a plot straight out of the 1970s and 1980s, or, more recently, from Gunday, two young men are best friends, and criminals. Dev (Ranveer Singh) and Tutu (Ali Zafar) have no individual histories - both were babies abandoned in a garbage dump, and both were literally picked up by local don Bhaiyaji (Govinda). He feeds them, clothes them, and, of course, trains them to be lethal killers. Life is good, and the two young men are very happy with their existence.

However, the balance shifts when Dev meets Disha (Parineeti Chopra). She is everything that he is not - educated, respectable, and has a bright future. Love, however, when it strikes, is not only unexpected, but also life-altering for both of them. Disha has no idea, strangely, of what Dev does, and nobody wants to concentrate on the feasibility of the long-term relationship for a while.

What is unexpected, however, is Bhaiyaji's obsession with keeping Dev under control. Suddenly he becomes the third wheel in what turns into a relationship triangle. Predictably, Dev wants to adopt the straight and narrow path now, before the impossibly oblivious Disha decides he is not worth it. He wants to rise in love. Tutu eventually wants what is best for his friend, but Bhaiyaji cannot sit back and watch his investment, because that is what Dev is, walk away.

The rest of the movie then follows the usual set of complications, reprimands, tiffs, songs, dances, tensions in relationships, more songs, and a rather lame climax.

As mentioned, the screenplay is a rehash of many movies that you have already seen, and some great packaging. The result is a confusing assortment of genres - the film hops from being a romance to a thriller to a musical to a drama, and repeat. The biggest flaw in the entire story is not the story itself, but the predictability. Even the plot points are exactly where you expect them to be, and within the first half hour, you realise how difficult it is going to be to sit through the entire movie.

The dialogues are worth a mention, though. Some of them are bound to become quotable quotes for film buffs. Unfortunately, the humour, which is a welcome distraction, is too thinly spread out. By the time the climax and the resolution take place, you find that you just do not care about what happens to the characters.

Does Shaad Ali want to portray a relevant issue here? It can be argued that he highlights the problems of bonded labour, so to speak, but he offers no practical solution, or even discussion, about it. Maybe he just wants to prove that true love brings your conscience to the fore. Or maybe he just wants to concentrate on testing loyalty and friendship. The best you can say about Shaad Ali's direction is that he shows marked improvement after Jhoom Baraabar Jhoom - which is not saying much, really.

The one and only reason to watch Kill/Dil is the main cast. The unlikely bromance, so to speak, between Ranvir Singh and Govinda is extraordinary. Ranvir Singh has grown in leaps and bounds since Band Baaja Baraat. He is everywhere - on billboards, on social media, in condom commercials. It is impossible to ignore him, and he grows on you in this movie, too, as Dev. His sizzling chemistry with Parineeti is worth mentioning, and he brings out the best in Ali Zafar, too. He is clearly the star of the film, and he doesn't have to try too hard.

Not that Govinda is any less. He is a far superior actor to his co-stars, and that is saying a lot. He is menacing, loving, funny, and yes, he dances. You suddenly remember why he was such a big deal two decades ago. The man knows how to entertain.

Parineeti Chopra is, as usual, striking in her role. She becomes Disha, and you forget that she is acting. She does not have much to do, though, but she will sweep you off of your feet. Ali Zafar is a little uncomfortable in his role as the cold-hearted killer, or so it seems. His countenance does not support his words and actions as Tutu, but he does his best. The four main characters will stay in your mind much after you forget what the movie is all about.

Yash Raj Films knows how to present a movie, and no expense is spared in the production and the costume designs. The visuals and the cinematography are near flawless, in YRF's trademark candy-floss manner. The title song is catchy, and fun to watch as a video, and the music is effective. There is no point blaming the editing for the way the story drags along, though - the script is the villain here.

Kill/Dil is a smartly packaged movie that makes you want to believe that Indian films are finally on their way to becoming smart and funny and exciting. "On their way" being the important part of that sentence.
Share. Save. Connect.
Tweet
KILL DIL SNAPSHOT 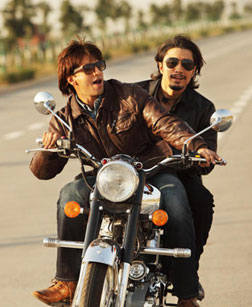 ADVERTISEMENT
This page was tagged for
fullmoviekilldildownload
kill dil movie in hindi hd movie
kill dil hindi movie download filmzilla
Downlod kil dil hindi movei
Kill Dil full movie in Hindi download 123
Follow @fullhyderabad
Follow fullhyd.com on
About Hyderabad
The Hyderabad Community
Improve fullhyd.com
More
Our Other Local Guides
Our other sites
© Copyright 1999-2009 LRR Technologies (Hyderabad), Pvt Ltd. All rights reserved. fullhyd, fullhyderabad, Welcome To The Neighbourhood are trademarks of LRR Technologies (Hyderabad) Pvt Ltd. The textual, graphic, audio and audiovisual material in this site is protected by copyright law. You may not copy, distribute, or use this material except as necessary for your personal, non-commercial use. Any trademarks are the properties of their respective owners. More on Hyderabad, India. Jobs in Hyderabad.