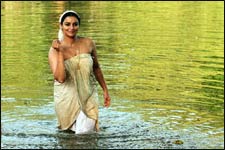 Deepa Garimella / fullhyd.com
EDITOR RATING
2.0
Performances
Script
Music/Soundtrack
Visuals
5.0
3.0
6.0
6.0
Suggestions
Can watch again
No
Good for kids
No
Good for dates
No
Wait to rent it
Yes
Seriously? Buxom "aunties" need lessons on how not to stir up hormonal chaos in adolescent boys?

What is not easy to see is why they had to remake it in the age of open sex, Dev D and Delhi Belly. Because whatever it is trying, it is only halfway there - both as an art movie and as soft-porn disguised as art.

Set in the '70s in an idle Kerala village, Rathinirvedam in 2011 stars Sreejith Vijay as Bujji and Shwetha Menon as Rathi, Bujji's hot neighbour. Bujji is all set to go to town to join an engineering course in a few weeks, and is shown to be very, very naughty - in the harmless, childlike, teasing-other-children-and-splashing-water-over-cousins sort of way. A little disturbing, yes, but all this is simply to show us how young at heart he is.

And then, he discovers his neighbour, the full-bosomed Rathi, who is voluptuousness personified. To Rathi, Bujji is a kid, a baby, even. The young man finds her immensely hard to resist, and seeks out more ways to check her flesh out - mostly voyeuristically. When he openly expresses his feelings to her, Rathi is shocked.

Rathinirvedam is a slow-moving, '80s-style movie. The problem with this remake (the reviewer must confess that she has not watched the original, and so cannot compare this one with it) is that Rathi is constantly asking for it. She does not seem conscious of the fact that she oozes sexuality even in her day-to-day chores, but that's only a minor problem.

For example, she also feels no need of an upper garment over her blouse when Bujji is around, and has absolutely no embarrassment whenever her pallu does fall off in front of him (which it seems to quite often, by the way). To her, even casual/accidental physical contact with the boy is no big deal, since she treats him like she would a young kid. Extremely poor judgement by a woman of "marriageable age", as they say, but that's the way the film plods on.

The emotions in Rathinirvedam, meanwhile, are pretty nicely captured. But they do tend to get lost in the anticipation of the intimate scenes that this film has set expectations for. The titillation part is about alright, and the camera keeps roving over Menon's curves at regular intervals.

Shwetha Menon looks a little old, but was a good choice for the curvaceous Rathi - who is but a symbol for the generic older-women figure that teenage boys fantasize about. Sreejith Vijay is good. The two have a steamy scene towards the end, which is elaborately directed.

The Kerala setting and culture, and the complete lack of customization for Telugu audiences, make this a less-than-enjoyable watch. Besides, why did they have to change the name of the lead from "Pappu" to "Bujji", thus destroying the lip sync further?

Check it out if you're curious, and you can be sure there's a whole theatre-full of people out there thinking exactly like you.
Share. Save. Connect.
Tweet
RATHINIRVEDAM SNAPSHOT