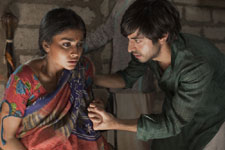 Nupur Barua / fullhyd.com
EDITOR RATING
6.0
Performances
Script
Music/Soundtrack
Visuals
6.0
5.0
5.0
8.0
Suggestions
Can watch again
Yes
Good for kids
No
Good for dates
Yes
Wait to rent it
No
Midnight's Children, like most of Salman Rushdie's works, is not an easy book to read. Many have tried to "get it", and failed to do so. So when the author is persuaded to write the screenplay for a movie based on his 1981 Booker Prize winner, you can rest assured that it is not going to be an easy film to watch.

An older Saleem Sinai (Salman Rushdie as narrator) takes us back to 30 years before India gained Independence. The story begins with the love story between his grandfather Dr. Aziz (Rajat Kapoor) - the one with the famous extraordinary nose - and the conservative Naseem (Shabana Azmi).

The couple moves to Agra, where they lead a sedate life with their three daughters, until a revolutionary anti-Partition poet named Nadir (Zaib Shaikh), on the run from Islamic groups and the army, becomes a refugee in their house. He falls in love with Mumtaz (Shahana Goswami), one of the daughters. They wed, but they never make it to the marital bed. Mumtaz then marries her sister's fiancé Ahmed Sinai (Ronit Roy), is re-christened Amina, and they move to Bombay.

The Sinais buy a house from William Methwold (Charles Dance), who is about to leave India for good. Methwold has managed to plant his seed in the womb of a street singer whose husband is named Wee Willie Winkie (Samrat Chakrabarti).

Both Amina and the singer deliver their respective babies at the stroke of the midnight hour, when independent India is born, and their lives are changed thanks to a nurse, Mary (Seema Biswas).

And thus begins a tale that intertwines the rich and the poor, the orphan and the privileged child, India and Pakistan, and real and unreal. All of this is topped off with a touch of magic and optimism.

The novel is really a story of the two nations that were ripped apart, leaving behind destruction and chaos. Saleem Sinai (Darsheel Safary, Satya Bhabha) is a personification of the new countries, whose childhood is filled with privilege and glamour; adolescence with suspicion, damage and despair; and adulthood with hope and redemption.

The movie follows a similar path, but the parallel is not so clear. Each scene, taken in solitude, is perfect. It just does not transition smoothly into the next scene, though.

One minute you have Saleem discovering his special powers, and the next minute you are not sure why that scene was important. In fact, most of the screenplay is shaky and abrupt, to the point of being unnerving at times.

In the book, it is Saleem's "childhood friends" who shape his life and thoughts. His nemesis is Willie's son, Shiva (Siddharth Narayan). Why they hate each other is never clear in the movie. Also, the movie does not dwell on, or even explain, the complexities in the relationships that Parvati (Shriya Saran), herself a midnight child, has with both Saleem and Shiva.

Too much time is spent on setting up the background to Saleem's life, which is interesting, but the rest of the rather long movie (150 minutes) rushes towards a conclusion that, conversely, takes ages to resolve itself.

The political scenario between the two countries between 1965 and 1971, and then the Emergency in 1975, is glossed over in a rather shallow manner that results in a loss of impact. Dialogues are heavy, and parts of the narration are superfluous.

Satya Bhabha is not a convincing Saleem. He lacks the depth that the character requires. He looks the part, but seems a bit overwhelmed by the complicated Saleem. Darsheel Safary as the younger Saleem is apt, and delivers a performance that will make you forget that he was in Zokkomon.

Shriya Saran does not have much to do, and Siddharth Narayan as the angry young man is almost wasted. The only actors consistent with their performances are Seema Biswas and Shahana Goswami (despite the bad aging make-up). Anita Majumdar creates an impression, and Rahul Bose is almost comical. Ronit Roy, playing the loving father and temperamental patriarch, is in his element, but his talent has not been exploited to its fullest.

In shorter roles, Khulbhushan Kharbanda is predictable, Anupam Kher and Soha Ali Khan are hardly there, and Shabana Azmi sulks a lot. Rajat Kapoor, with a prosthetic nose, is decent.

Deepa Mehta's brother, Dilip Mehta, is the production designer for the movie, and he has done a commendable job. The film does not try too hard to portray a period set-up, but the props and locations used are relevant, and reminiscent of a certain era, especially in the first half of the movie. The costumes are normal, and the cinematography is one of the three heroes of the film (the other two being the production design and the Seema-Shahana duo). The music is nothing to write home about, though.

Despite the stilted dialogue delivery (in English) and the very Western perspective of a developing India, Midnight's Children is a one-time watch, never mind the length. There are several yawn-inducing scenes (because Rushdie was almost indulgent with his writing), and the flow is confusing, but watch the movie if you are a Rushdie-Mehta fan. Only, the book is much better.
Share. Save. Connect.
Tweet
MIDNIGHT'S CHILDREN SNAPSHOT 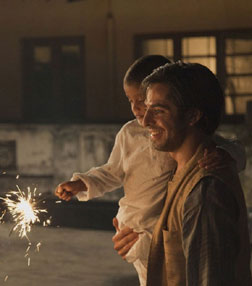 ADVERTISEMENT
This page was tagged for
Midnight's Children english movie
Midnight's Children reviews
release date
Satya Bhabha, Shriya Saran
theatres list
Follow @fullhyderabad
Follow fullhyd.com on
About Hyderabad
The Hyderabad Community
Improve fullhyd.com
More
Our Other Local Guides
Our other sites
© Copyright 1999-2009 LRR Technologies (Hyderabad), Pvt Ltd. All rights reserved. fullhyd, fullhyderabad, Welcome To The Neighbourhood are trademarks of LRR Technologies (Hyderabad) Pvt Ltd. The textual, graphic, audio and audiovisual material in this site is protected by copyright law. You may not copy, distribute, or use this material except as necessary for your personal, non-commercial use. Any trademarks are the properties of their respective owners. More on Hyderabad, India. Jobs in Hyderabad.