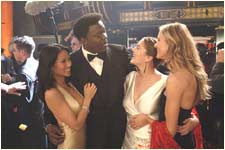 "Our world today faces many crises, not the least of which is the serious Bad Movie crisis. According to reports, officials have apparently increased the bad movie alert to 'orange' and even 'red' in some areas. This is in response to one of the worst cases in recent history of Bad Sequel."

The good news is that we may have a solution to the energy crisis, though! According to Charlie's Angels - Full Throttle, maybe governments worldwide need to take bullshit more seriously (ha ha...I pun) as an alternate power source - apparently it's abundant, has enough energy to cause huge explosions, and best, it has something to do with beautiful women in tight, skimpy clothing. Yay!

CA-FT is very much in the league of no-brainer, action sex comedy flicks with its 3 sentence storyline. However, as just a hotch-potch of sequences vaguely connected to each other, it doesn't satisfy any of the criteria to make a successful film in any of the above genres.

Dylan Sanders (a marginally more mature Drew Barrymore), Natalie Cook (an irritatingly hammy Cameron Diaz) and Alex Munday (a freckled, fit, Lucy Liu) work for mysterious millionaire Charles Townsend. They are your basic everyday troubleshooters - masters of disguise, martial art experts and mini encyclopaedias with mega assets. Ho hum... so anyway, this time they are out to get some titanium finger rings containing encrypted information about the people on the federal witness program. Wow, good stuff, eh?? The trusted Bosley (comedian Bernie Mac) helps them along and does the jokes and general donkey work.

Starting off in a remote Mongolian outpost, they breeze through beaches, dirtbike race tracks, construction sites and convents with equal ease, chasing the baddies. The connections between these places are unbelievably paper thin. Connecting a brick you dug up in your garden to the Harappan civilization might seem more plausible.

Anyway, the Angels face questions of friendship, separation, new love and Dylan's old boyfriend who's out for revenge. Eventually, they uncover the baddie and proceed to kick some more butt. The best part of the climax for me was a beautiful Ferrari Viper... that they eventually trashed (boo hoo!). 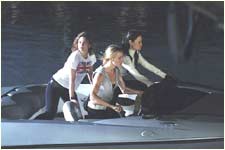 You know there's no story - so let me tell you about the rest. Don't even get me started on the action stunts. A copter coming out of the back of a truck falling over a dam? And the bike stunts on the race track... man! They make Crouching Tiger Hidden Dragon and MI-2 look as everyday as eggs and sent my puh-leeeease-o-meter rocketing. But the script here is either very smart or very stupid, because I got the feeling that the film was actually parodying the others, making it smart. Anyway, the girls seem to have a great time of it all, and the fun gets infectious at times.

There are some interesting cameos too. John Cleese as Alex's dad who thinks the Angels are strippers; Matt LeBlanc (Joey in Friends) as Alex's boyfriend who gives her dad the idea; the intense Justin Theroux with his lovely Irish accent as Dylan's psycho ex; and cult favorite Crispin Glover as The Thin Man - all add to the general mayhem. 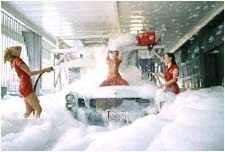 Demi Moore is good in her comeback vehicle, and looks as good as ever. (Psssstt... find out where she lives - the plastic surgeons are great!). The soundtrack is loud and generally appropriate, with Prodigy's 'Firestarter' leading. You might remember a lovely scene in the original with a car falling off a bridge in slow motion with Prodigy's 'Smack My Bitch Up' in the background.

ADVERTISEMENT
This page was tagged for
Charlies Angels Full Throttle english movie
Charlies Angels Full Throttle reviews
release date
Cameron Diaz, Drew Barrymore
theatres list
Follow @fullhyderabad
Follow fullhyd.com on
About Hyderabad
The Hyderabad Community
Improve fullhyd.com
More
Our Other Local Guides
Our other sites
© Copyright 1999-2009 LRR Technologies (Hyderabad), Pvt Ltd. All rights reserved. fullhyd, fullhyderabad, Welcome To The Neighbourhood are trademarks of LRR Technologies (Hyderabad) Pvt Ltd. The textual, graphic, audio and audiovisual material in this site is protected by copyright law. You may not copy, distribute, or use this material except as necessary for your personal, non-commercial use. Any trademarks are the properties of their respective owners. More on Hyderabad, India. Jobs in Hyderabad.