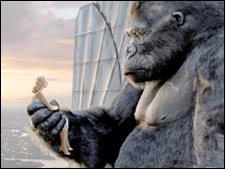 Priyanka Pulla / fullhyd.com
EDITOR RATING
9.0
Performances
Script
Music/Soundtrack
Visuals
NA
NA
NA
NA
Suggestions
Can watch again
NA
Good for kids
NA
Good for dates
NA
Wait to rent it
NA
For a change, the seating at Skyline is by the number on the ticket, ‘cause the turnout is in droves. And why does an Urdu- and Telugu-speaking community flock to a Hollywood movie? That’s ‘cause this King Kong speaks the universal language – of emotions and gestures – in its most primordial and boiled-down form.

Kong plays a ragingly territorial and tempestuous lover, a possessive courter who beats his chest when provoked, and a whimsical and moody …beast. Does it matter that he is a beast? Contrariwise, it just makes it easier to project the most extreme of caprices on him. In one way, King Kong is a catharsis.

Meanwhile, the night within the cinema hall swallows you, as the only thing that remain are the magnificent CGI effects and the brilliant screenplay of King Kong. It’s three hours of blissful abandon – knee-slapping comedy, and copious Cyclopean creatures that overpower your mind both by their size and their grisliness, and create an exquisite crucible of experiences that lock you in comfortably. For 3 hours, you really don’t want to leave. Like some exotic ball, it carries on, and you wait ‘cause what lies ahead always seems worth waiting for.

Staying true to the 1933 original, this blockbuster brings back Ann Darrow (Naomi Watts), an unemployed stage artist and a conventional beauty with golden curls and blue eyes. She is picked up starving by an opportunistic movie producer Carl Denham (Jack Black), for a lead role in a movie to be shot on Skull Island, a mythical, undiscovered island that he wants to be the first to expose to mankind. Jack Driscoll (Adrien Brody) is the scriptwriter, typing away in the ramshackle hold of the ship S S Venture that is supposed to otherwise hold captive animals that it transports.

The first half of the movie is clean of Kong, but you are thankful because it is so humorous. Denham, Captain Englehorn (Thomas Kretschmann) and others fit into their parts in a way they would, only if they have brought something novel of their own. In other words, they complete the characters with their own peculiarities.

Jack Black with his near reptilian eyes, cold yet shrewd, calculating yet frigid, goes about pushing everybody along his way. At the same time, there is the pudgy look, out to cut a comic effect on the whole. The affair between Ann and Driscoll that blossoms hurriedly is gently piquing and full of awkward sweetness. And natives on the Skull Island? Well, they are chilling and monstrous, yet the escape of the crew forces in some lighter moments. Like any epic worth its name, King Kong has equal parts of everything – horror, fear, love, humor and other emotions yet unnamed.

One can see shades of Predator, in the moments before Kong is revealed. The same shadowy, alarming hint of a presence. Only this Predator is a walloping whopper. When the beast first whisks away Ann, the moments as he bounds across the jungle, the close-ups of Ann as she is slammed up and down like in a mixer, are those of horror in its quintessence. There is an uncontrollable shiver of excitement when Kong appears to battle the dinosaurs to save Ann. A mallayuddha follows and it is hilarious and awesome at the same time. It ends with the giant ape ripping apart the jaws of the dinosaur.

Just as the ice-age refugee dinosaurs, there are primitive critters, varmints and roaches that attack with an unyielding frenzy. The scenes are hideous and grody, the kind that make you want to cover your face and then peep from between a pair of fingers.

The love affair between Ann and Kong is the sweetest, meltiest, chocolatey part of the whole shtick. You will love the scene when he first falls for her acrobatics and even lets out a near human guffaw. Or when they go ice-skating. An ape that loves like a human – that’s right, that’s the raison d’etre for this movie that is what exalts the whole show.

For a 3-hour film, it is definitely remarkable that most people will want to watch this one again. King Kong belongs in the library of classics. It is the stuff archetypes and idioms of a culture are made of. Skip this movie at your own risk. You will be answerable to your grandchildren.
Share. Save. Connect.
Tweet
KING KONG SNAPSHOT

Check out the answer to the mystery -


RATING
6
Bad Kong on 9th Jan 2006, 2:40pm | Permalink
Highly over-rated and a real boring movie. Its the first time Fullhyd and MsPulla have disappointed me.
RATING
4
Aamchi Hyd on 2nd Jan 2006, 9:02pm | Permalink
Simply perfect - and Priya, your last line was, simply put, appropriate. Once-in-a-decade kind of a movie, rather, experience.
RATING
10
Rahul on 2nd Jan 2006, 4:11am | Permalink
Words are not sufficient to express the beauty of this movie. CGI being excellent is a MUST - common we expect that from the director of LOTR. But, to have a HEART & SOUL to a movie and story that is as old as time itself is amazing. Kong was done amazingly and needless to say, the emotion infused in the movie was A+. I would highly recommend every person to watch this movie on the big screen - nothing less!
RATING
10
Vijay Nair on 1st Jan 2006, 8:48am | Permalink
hey priyanka..I know you like to keep the dictionary open while writing reviews but most people dont like doing that when they read your reviews, but you write well.. By the way this is a nice movie..and is a major leap in the field of 3d graphics and motion capture.A must watch
RATING
8
LEAVE A COMMENT
fullhyd.com has 700,000+ monthly visits. Tell Hyderabad what you feel about King Kong!
MORE MOVIES
Latest Reviews
Vakeel Saab
Wild Dog
Sulthan (Telugu)
Sulthan
Rang De (Telugu)
more
Saina
Aranya
Sashi
Chaavu Kaburu Challaga
Mosagallu
Gaali Sampath
Sreekaram
Jathi Ratnalu
A1 Express
Power Play
Contemporary Reviews
Flightplan
Mujhse Shaadi Karoge
Shaadi No. 1
Taj Mahal
Meenakshi
more
Rain
Nayakudu
Premeswari
Yuvaraju
Maine Dil Tujhko Diya
Mr. Ya Miss
Monster-In-Law
Cast Away
Adirindayya Chandram
Random Reviews
Raja Ko Rani Se Pyar Ho Gaya
Joy Ride
Dil Chahta Hai
Split Wide Open
Aggar
more
Aakasamantha
Chalaki
Virodhi
Piranha 3DD (Hindi)
Operation Duryodhana 2
Purani Jeans
Jai Ho Democracy
Naruda Donoruda
Sketch
Kaithi (Tamil)
SEARCH MOVIES
Dissatisfied with the results? Report a problem or error, or add a listing.
ADVERTISEMENT
SHOUTBOX!
{{todo.name}}
{{todo.date}}
[
ip{{todo.ip}}
]
{{ todo.summary }}... expand »
{{ todo.text }} « collapse
First  |  Prev  |   1   2  3  {{current_page-1}}  {{current_page}}  {{current_page+1}}  {{last_page-2}}  {{last_page-1}}  {{last_page}}   |  Next  |  Last
{{todos[0].name}}

ADVERTISEMENT
This page was tagged for
King Kong english movie
King Kong reviews
release date
Naomi Watts, Jack Black
theatres list
Follow @fullhyderabad
Follow fullhyd.com on
About Hyderabad
The Hyderabad Community
Improve fullhyd.com
More
Our Other Local Guides
Our other sites
© Copyright 1999-2009 LRR Technologies (Hyderabad), Pvt Ltd. All rights reserved. fullhyd, fullhyderabad, Welcome To The Neighbourhood are trademarks of LRR Technologies (Hyderabad) Pvt Ltd. The textual, graphic, audio and audiovisual material in this site is protected by copyright law. You may not copy, distribute, or use this material except as necessary for your personal, non-commercial use. Any trademarks are the properties of their respective owners. More on Hyderabad, India. Jobs in Hyderabad.