My Father Is A Hero Review 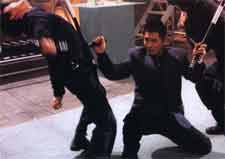 Feroz Hassan / fullhyd.com
EDITOR RATING
7.0
Performances
Script
Music/Soundtrack
Visuals
NA
NA
NA
NA
Suggestions
Can watch again
NA
Good for kids
NA
Good for dates
NA
Wait to rent it
NA
So, Jet Li did get a chance to get out of his robes, much before Romeo Must Die happened. As a cop and a family man, Li sure is different in this one. It was a pleasant surprise to watch the guy a lot more relaxed than he otherwise is. But it ceased to be pleasant not ten minutes into the movie, and there were no more surprises forthcoming after this point. In fact, there isn't much of a family left for him after thirty minutes. Jet Li plays an undercover cop (he couldn't avoid that one, could he?) who is on a mission to Hong Kong (this was made a while before the city became a part of the mainland) to capture a terrorist. The secrecy that the mission is shrouded under makes Li appear a criminal, and this rumor takes it toll on his unsuspeting wife who dies. Another cop, Anita Mui, and Li's son (Tze Mui) land up in Hong Kong where Li has managed to get close to the terrorist. Now what's stopping him, you may ask. No idea about that. Some 45 minutes from here, everything turns out fine, and the three get together.

Isn't much of a story, but the action is more than sufficient to keep you glued to your seat. The li'l guy is just terrific, and manages to steal the thunder from right under Li's nose until the latter pulls his back in the last ten minutes. The action here is simply unbelievable, and if it weren't for the guys' shape, I would have mistaken the tossing objects to be balls.

But what's all the melodrama about Li's wife and kid? I guess that's the novel element here. Isn't much of one, either. But forget that and watch out for the business element. Now, that did all the business for the movie, didn't it?
Share. Save. Connect.
Tweet
MY FATHER IS A... SNAPSHOT
MY FATHER IS A HERO SNAPSHOT