The Hobbit: The Desolation Of Smaug (3D) Review 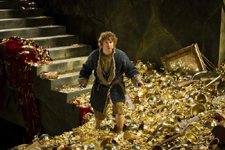 Kritika Deval / fullhyd.com
EDITOR RATING
7.0
Performances
Script
Music/Soundtrack
Visuals
8.5
5.5
9.0
9.0
Suggestions
Can watch again
Yes
Good for kids
Yes
Good for dates
Yes
Wait to rent it
No
Glad it is we were when the wandering, meandering, sauntering first part of the projected trilogy was over and done with, for now we could get to the meat of the matter. The Hobbit - Part 2, The Desolation Of Smaug, is where our miniature heroes must come face-to-face with their mortal enemies, whether the latter be in the light or whether they be in the dark. And, so they do, but not before they get into a lot of related and unrelated trouble.

Here's a quick recap for those who haven't seen the first part. Gandalf (Ian McKellen) has a bunch of dwarves break into hobbit Bilbo Baggins' (Martin Freeman) house. They sit down, trash his house, sing, eat, sing, drink, sing, clean up, and then Gandalf recruits Bilbo on a Quest to rob a Dragon.

Yes. You read that right. Now you know to avoid old bearded hobos like death itself.

So, anyway, they get about halfway across the path to the Lonely Mountains in the first part, amidst lots more singing and bashing stupid trolls and getting chased by Orcs and so on, until you are slowly and tediously dragged into a cliffhanger, where the second part begins.

Now, the USP of this part is that you get to see a dragon, and a mighty fine dragon it is too. Smaug is his name, but you don't get to see much of him until the end. Before that, however, there is lots of fun involving more Orcs, a werebear (hehe), Elves, giant spiders (pause for eeeeeks), shadows in the dark, and a gold ring Bilbo picks up from a pathetic creature in the first part. Now, since The Hobbit is supposed to come before Lord Of The Rings, you aren't really supposed to know anything about the ring.

But we know. Oh yes, we know. My pressssshyussss.

Now, the trouble with this film is Peter Jackson's definition of creative license. For instance, his introduction to the script a female Elf played by the female from Lost (Evangeline Lilly). We understand his eagerness to bring in a pair of boobiesdwarf of the non-Orc, non-dwarf, non-hobbit, non-giant-spider variety, all of which would've no doubt caused immeasurable damage to all beholders.

But, it also meant introduction of the kind of cheesy sap which probably, no, possibly, caused the audience to laugh until they cried (our entire row, for instance, positively shook when one of the dwarves started wooing the fair creature).

And then there is the dragon. My oh my he dumb. And he talks. A lot.

But then, there is one thing that makes this series better even than the hallowed LOTR trilogy, despite it being an unnecessarily stretched out journey from one point to another. It is the character of Bilbo Baggins, as performed by Martin Freeman, which makes the character a million times as engaging and interesting as that of the whiny and weepy and frail Frodo.

That aside, the pace is fast, and the film is better than the last one, in the sense that there is more happening and less mournful singing. The performances, for some reason, go from grandiose to a tad tired and wooden.

The graphics are as wonderful as Tolkien-based film by Jackson. We do wish they could've made the Orcs less ugly. They make your eyes hurt just to see then for a minute non-stop. And there's so many of them around all the time in this film. The soundtrack blends seamlessly into the appropriately gloomy visual.

And that's all there is to say about this way-stop to the end. This is the middle part, and it is fun to watch. If you intend to follow the series to the end, you can't do without watching the film. If this is the first time you're going Tolkein-ing, then there is no point whatsoever, because the movie completely lacks the ability to stand on its own.
Share. Save. Connect.
Tweet
THE HOBBIT: THE DESOLATION... SNAPSHOT
THE HOBBIT: THE DESOLATION OF SMAUG (3D) SNAPSHOT 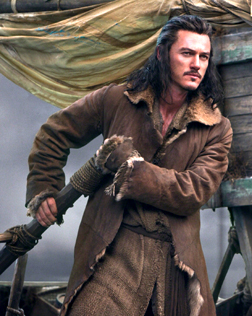 "They make your eyes hurt just to see then for a minute non-stop. And there's some many of them around all the time in this film."

"My oh my he dumb" is intentional, but "And there's some many" and "If you intend to following the series" were indeed errors. The last two have been fixed. Thanks for pointing them out :)

ADVERTISEMENT
This page was tagged for
The Hobbit: The Desolation Of Smaug (3D) english movie
The Hobbit: The Desolation Of Smaug (3D) reviews
release date
Ian McKellen, Martin Freeman
theatres list
Follow @fullhyderabad
Follow fullhyd.com on
About Hyderabad
The Hyderabad Community
Improve fullhyd.com
More
Our Other Local Guides
Our other sites
© Copyright 1999-2009 LRR Technologies (Hyderabad), Pvt Ltd. All rights reserved. fullhyd, fullhyderabad, Welcome To The Neighbourhood are trademarks of LRR Technologies (Hyderabad) Pvt Ltd. The textual, graphic, audio and audiovisual material in this site is protected by copyright law. You may not copy, distribute, or use this material except as necessary for your personal, non-commercial use. Any trademarks are the properties of their respective owners. More on Hyderabad, India. Jobs in Hyderabad.