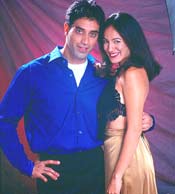 Smriti Kashyap / fullhyd.com
EDITOR RATING
6.0
Performances
Script
Music/Soundtrack
Visuals
NA
NA
NA
NA
Suggestions
Can watch again
NA
Good for kids
NA
Good for dates
NA
Wait for OTT
NA
Kill, maim, destroy, equip, power-slam, rinse, repeat - but whatever you do, leave that culturally repressive tag at home. Yeah, that tag of... ughh, I cant even bring myself to barf it up... American Born Confused Desi - or, to use the twice around beaten to death cliché, ABCD.

These cross-over flicks have aajkal become more common than a buffalo with milk. But while most of them try to be arty-sharty and fart out noxious intellectual fumes (ohhh, shut up and sit down Monsoon Wedding, you'll get your turn) nobody really tries to entertain. And this is where I think that American Desi scores its first set in the match.

The title American Desi, yeah, is as imaginative as putting pickles on a tab of Crocin, but this low-budget, low-brain intensity flick is every bit as much fun as a jhoola ride in the Mela.

So the gas is basically about this All-American guy called Kris whose main grouse in life stems from the fact that he is as Indian as it gets - with a home reeking of samosa fumes, and chai-ki-patti boiling in small bartans. Kris is as comfy with his origins as a Pirelli calendar girl in a monastery. Looking forward to zip off to his college with his chaddi friend, a gora called Eric, Kris hopes to find some respite in his college campus.

But Kris' gods and sub-gods apparently had something else charted out in his janam kundali, as he finds himself smack-bang back in Indian surroundings. All thanks to his oddball assortment of roomies:

1. Salim (Rizwan Manji), whose primary aim in life is to map a raunchy route with Rekha (yeah, Umrao Jaan to you too!)
2. Jagjit Singh (Ronobir Lahiri), an artistically inclined Sikh who'd rather make papier mache pandals than actually graduate as an engineer, and
3. Ajay (Kal Penn), black-badass-homie sorts, who is more African than Indian or even American or rather American Indian.

Just like socks don't go with paper-printers, Kris sticks out like a sore thumb with his roomies, refusing to have to do anything with them. But like we said earlier, the sub-gods had something else altogether in their minds, as Kris finds himself enlisting the help of his roomies to land the gal he loves - Nina (Purva Bedi), a desi who is as comfortable with her Indian origins as a baby in a Pram, pissing Kris off like nobody business. Salim on the other hand finds himself hounded by Farah - an outspoken Muslim in tanktops and an attitude to boot.

The flick then takes off as love fills air and music flows through the Navratri. Nina coaches Kris as he comes to grips with his own culture, and Salim finally exorcizes thoughts out of his head that Western-looking doesn't exactly mean Western-thinking. Or whatever, just watch the flick.

The film incidentally is as non-pretentious as it gets. The storyline is a bit trite with a song-dance-garba routine and some good ol'-fashioned dishum dishum thrown in for good effect. Heck, I ain't complaining. The performances are quite good, though the accents are terribly tacky and out of place.

One commendable part of the script is the clearly etched characters - each of them has its own space to work in, and they make a lasting impression. I wish I could say the same about the camerawork and editing - too grade school to be called professional, and too professional to be called amateur. If it's any consolation, the gags were fairly funny - though as old as the hills in The Sound Of Music.

At the end of the day, the film is fairly cute and is a great way to swat off afternoon blues. But if you're looking for something intellectual that will expound ceaselessly on the values of our great culture, then look the other way, 'coz AD is intellectually outclassed by a dead sheep. But if you're looking for clean desi humor, then head this way Sahibs.
Share. Save. Connect.
Tweet
AMERICAN DESI SNAPSHOT

ADVERTISEMENT
This page was tagged for
american desi movie
American Desi english movie
American Desi reviews
release date
Deep Katdare, Purva Bedi
Follow @fullhyderabad
Follow fullhyd.com on
About Hyderabad
The Hyderabad Community
Improve fullhyd.com
More
Our Other Local Guides
Our other sites
© Copyright 1999-2009 LRR Technologies (Hyderabad), Pvt Ltd. All rights reserved. fullhyd, fullhyderabad, Welcome To The Neighbourhood are trademarks of LRR Technologies (Hyderabad) Pvt Ltd. The textual, graphic, audio and audiovisual material in this site is protected by copyright law. You may not copy, distribute, or use this material except as necessary for your personal, non-commercial use. Any trademarks are the properties of their respective owners. More on Hyderabad, India. Jobs in Hyderabad.