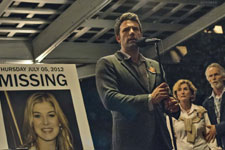 Kritika Deval / fullhyd.com
EDITOR RATING
8.5
Performances
Script
Music/Soundtrack
Visuals
9.0
7.0
7.5
8.0
Suggestions
Can watch again
Yes
Good for kids
No
Good for dates
Yes
Wait to rent it
No
The scene is set in a sleepy town in Missouri where the pretty, polished, smart Amy Dunne (Rosamund Pike) lives with her indifferent but equally pretty husband Nick (Ben Affleck). We are told that it is the couple's 5th anniversary, and that Amy has gone missing.

Amy, as it turns out, is the lead of a series of stories for kids written by her parents, and the disappearance of this archetypical America's Sweetheart causes the kind of media frenzy that lends itself to the kind of ironic rapaciousness that sets the tone for the rest of the film. Nick, as is perhaps inevitable, is implicated in her disappearance, and must either find her, or placate a whole nation of irresponsible media persons before their zealotry sees him hanged even before he is declared guilty.

Meanwhile, we see Amy's and Nick's tale unfold through Amy's voice, as she tells of a life that was perfect, until, of course it wasn't. We see them lose their jobs in New York and having to shift to Missouri. We see Nick go from indifferent to unfaithful to slightly abusive. We empathize with this young woman who seems to have gotten either far more than she bargained for or far less. Until, of course, we don't.

Gone Girl is confusing like that. It never lets you like the people in it, nor does it allow you to comfortably hate them. One minute Amy Dunne is a nice, self-deprecatory young woman who pulled out a bad card, and the next a glorious psychopath. One minute Nick is a cheating slacker, and the next a clueless man stuck in the toils of a femme fatale. In a film that lasts about two hours, Gone Girl makes you go through so many emotions as to leave you drained at the end.

Based on a book of the same name by Gillian Flynn (who also adapted the story for film), the movie manages to so perfectly capture the twisted ambivalence of the novel that you don't for an instance think of whether or not it matches the book. David Fincher takes what is mostly a series of monologues, and turns it into a visual display that turns dirty, filthy, murder into a thing of beauty.

And, at the heart of it all is Rosamund Pike, who embraces the sheer bloody-mindedness of her character with all of her heart, giving us an Amy Dunne who goes from victim to avenger, from pawn to player, before your mind can actually take it in. Dunne is only one in a film that is full of female characters who are multi-faceted, strong, and as admirable as they are fearsome.

As a matter of fact, whether this is due to the way the story is built or due to the gender of the author, the male characters suffer by comparison. You often feel for Nick Dunne, Ben Affleck's character, but you are never drawn to it the way you are to Pike's character. Ben Affleck, though, does complete justice to this weak, thoroughly underwhelming character, and if that doesn't work out for you, you can always just look at his face.

Neil Patrick Harris, as Amy Dunne's former stalker, is sadly lackluster, and his characterization is perhaps the only low point here. Carrie Coon as Nick's sympathetic twin sister, and Kim Dickens as the detective in charge, give us female characters to root for despite the two being at loggerheads. Emily Ratajkowski adds up to the eye candy that the whole film is replete with, and Tyler Perry, as Nick's lawyer, is fun to watch despite being just a bit of a stereotype.

A watertight screenplay barely allows you room for anything but the most knee-jerk emotional reactions, enhanced happily by the moodily noir cinematography that is oddly dated for a story which is clearly contemporary. The soundtrack blends in perfectly, and contributes to enough shocks all on its own.

Gone Girl is one of those movies that you want to watch for the eye candy, but stay for the perverse catharsis. Do not take the A rating lightly.
Share. Save. Connect.
Tweet
GONE GIRL SNAPSHOT 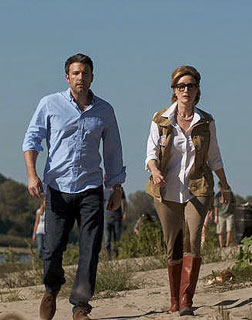 See Gone Girl full details
GONE GIRL USER REVIEWS
1 - 2 OF 2 COMMENTS
POSITIVE  |  NEGATIVE |  NEWEST  |  OLDEST  |  MOST HELPFUL  |  LEAST HELPFUL
USER RATING
7.0
2 USERS
Performances
Script
Music/Soundtrack
Visuals
8.0
8.0
6.0
6.0
Can watch again - Yes
Good for kids - No
Good for dates - Yes
Wait to rent it - No
Booyakasha on 17th Nov 2014, 2:30pm | Permalink
Lady bashers are gonna love this one and feminists will go hoarse about how in fact she was driven to do this and that. Irrespective, Gone Girl is a slick, entertaining cat-and-mouse game that will stay long in memory. The performances are top notch and I thought Carrie Coon as Margo, Nick's twin sister, stood out. Ben and Rosamund were outstanding with the latter really pulling up a surprise after being seen in so many action flicks like Die Another Day, Johnny English, Wrath of the Titans etc. Even my parents and in-laws enjoyed this.


Pros: Ben, Rosamund and Carrie Coon
Cons: Pace
RATING
8
GB's on 13th Nov 2014, 5:11pm | Permalink
This movie is worth only 6 stars because of the way the writer/director safely escapes from the more crucial point of the story, the conclusion. And leaving it to the audience (That doesn't count as "genius work", period) has become fashionable these days and giving higher ratings to such movies has become even more fashionable the reviewers.

ADVERTISEMENT
This page was tagged for
Gone Girl english movie
Gone Girl reviews
release date
Ben Affleck, Rosamund Pike
theatres list
Follow @fullhyderabad
Follow fullhyd.com on
About Hyderabad
The Hyderabad Community
Improve fullhyd.com
More
Our Other Local Guides
Our other sites
© Copyright 1999-2009 LRR Technologies (Hyderabad), Pvt Ltd. All rights reserved. fullhyd, fullhyderabad, Welcome To The Neighbourhood are trademarks of LRR Technologies (Hyderabad) Pvt Ltd. The textual, graphic, audio and audiovisual material in this site is protected by copyright law. You may not copy, distribute, or use this material except as necessary for your personal, non-commercial use. Any trademarks are the properties of their respective owners. More on Hyderabad, India. Jobs in Hyderabad.