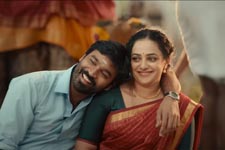 Sai Tulasi Neppali / fullhyd.com
EDITOR RATING
7.5
Performances
Script
Music/Soundtrack
Visuals
8.5
8.0
7.0
7.0
Suggestions
Can watch again
Yes
Good for kids
No
Good for dates
Yes
Wait for OTT
Yes
Thiru is a food delivery boy who just wants to live his middle-class life in peace. Good tips, evening beers, Netflix in bed, Whatsapp with friends - that's the extent of his ambition. A girlfriend would be nice to have. But he can't be bothered to make much effort to land one. He wants to keep his world small. His best friend is his downstairs neighbour, Shobana. His drinking buddy is his grandfather, the man he was named after. Thiruchitrambalam. Thiru.

Roiling inside Thiru is deep-seated anger towards his father (Prakash Raj). At the slightest provocation, he erupts like a volcano. Plates of food are flung to the floor, and hurtful words are uttered. Grandpa Thiru acts as a go-between for father and son who haven't spoken directly to each other in over ten years. In this way, the three generations of men share a roof, never confronting the gaping void within its walls. Where are the women of the household? Where are Thiru's mother, and his little sister?

A weighty movie, Thiru deals with themes of survivor guilt and grief, and their profound effect on a young man. Unable to process his loss in a healthy way, Thiru is stuck in a cycle of blame and shame. It makes him small and cowardly, incapable of moving within the world with confidence. He never puts up a fight, and never stands up for himself. Until finally, an incident forces him to confront his trauma head-on and let his healing begin.

However, despite the gravitas of the story, the movie has plenty of joyous moments, too. It feels like a celebration of middle-class life and all its travails, with its imperfect characters and authentic dialog. There is Grandpa Thiru (Bharathiraja), always cradling a bottle of beer in his hand, full of wit and practical advice for a clueless grandson. An all-knowing Krishna to his grandson's Arjuna. His specialty are dating tips: don't get friendzoned, and don't play hard to get, are some of his top hits. He is also the ultimate wingman. Thiru and grandpa Thiru's camaraderie, the casual way they berate each other, is entirely endearing.

And then there is Thiru's bestie Shobhana (Nitya Menen). A delightful character with a boisterous laugh. She and Thiru are joined at the hip, fighting like school children, hitting and taunting each other, and laughing at the others' misfortunes. But like a true friend, she shows up for him at his lowest points. She may tease his attempts at landing a girl (Rashi Khanna) way above his league, even celebrate with him when he makes headway, but she is the one to console him when he ultimately flubs and lands on his face. How long will it take for Thiru to realize that this loud-mouthed crackpot is the love of his life?

Director-writer Raj taps into the full spectrum of human nature to form the emotional core of the movie. There are no hero or comedian, no caricatures with exaggerated talent or glamorized defects. Just complicated people trying to make the best of their complicated circumstances. Apart from a couple of scenes that seemed contrived, and an unnecessary dance number, Thiru's story engages the audience by being genuine and honest to the very end.

Thiru ultimately succeeds because of the knockout performances of its faultless cast. Even the dubbed voices of this Tamil movie perfectly capture the emotions and humour of the original. Dhanush is versatile as Thiru, a character who has to ride a wave of complex emotions of anger and grief, joy and romance. Prakash Raj as Thiru's tough father, who is suffering his own inner turmoil, brings his characteristic depth to the role.

Bharathiraja nails the superbly-crafted character of grandpa Thiru. He evokes the biggest audience laughs with his well-timed witticisms. By the end of the movie, he leaves you wanting more. And I, for one, would watch a movie centered on his character.

The standout actor in the movie is Nithya Menen. She is absolutely radiant as the playful and practical Shobana, a perfect complement to Dhanush's morose and love-lorn Thiru. Menen's natural charm and her stunning smile are put to full use, and it is hard not to fall in love with her. Even though Shobana is secondary to Thiru's story, we get glimpses into her inner world as the giver and caretaker in their relationship. Menen manages to emote even these hidden feelings at the edges of Shobana's vivacious personality so that when her big moment finally arrives at the end of the movie, we are right there with her.

Thiru comes as a breath of fresh air in the miasma of mindless commercial cinema. It comes as a reminder that big budgets, fantastical fights and improbable stories don't have an exclusive claim to the big screen. That stories of our everyday lives, their imperfections and messes, are worthy of being told too.
Share. Save. Connect.
Tweet
THIRU SNAPSHOT 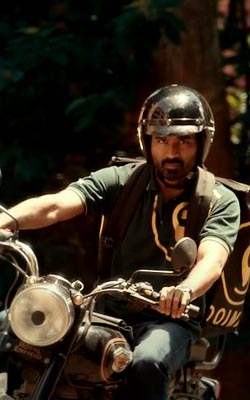 ADVERTISEMENT
This page was tagged for
Thiru telugu movie
Thiru reviews
release date
Dhanush, Raashi Khanna
theatres list
Follow @fullhyderabad
Follow fullhyd.com on
About Hyderabad
The Hyderabad Community
Improve fullhyd.com
More
Our Other Local Guides
Our other sites
© Copyright 1999-2009 LRR Technologies (Hyderabad), Pvt Ltd. All rights reserved. fullhyd, fullhyderabad, Welcome To The Neighbourhood are trademarks of LRR Technologies (Hyderabad) Pvt Ltd. The textual, graphic, audio and audiovisual material in this site is protected by copyright law. You may not copy, distribute, or use this material except as necessary for your personal, non-commercial use. Any trademarks are the properties of their respective owners. More on Hyderabad, India. Jobs in Hyderabad.