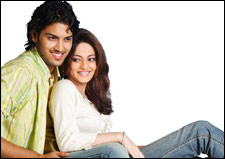 Deepa Garimella / fullhyd.com
EDITOR RATING
2.0
Performances
Script
Music/Soundtrack
Visuals
1.0
2.0
3.0
1.0
Suggestions
Can watch again
No
Good for kids
No
Good for dates
No
Wait for OTT
No
Kaashh... is the story of some vacant-faced psychos who do creepy things like wish death upon other vacant-faced people who have just come to have a decent time. But enough about the plight of the audience already! After all, how much does the opinion of a 5-member audience (including 1 cat) on the balcony count??

The fact is that putting Sneha Ullal, and people who make her seem like a 'senior actress' by comparison, in the same movie, is like multiplying zeroes. Demonstration of the arithmetic is just the kind of fancy, random, dubious, word-count-meeting and man-hour-increasing trick that we will not resort to, even though we operate under constraints like meeting word counts, earning money by the hour, and counting words as we write, so there! Multiply the zeroes yourselves!

Leading the deadpan pack is Sneha Ullal, who plays Radhika, the girlfriend of Krish (Kumar Saahil), an artist-photographer. When Krish has to go to Mauritius on work, he takes Radhika along. After a song or two, Radhika returns to India, and Krish finds himself a place to stay in the outhouse of a bungalow owned by the blind widower Batra (a barely recognizable Rajesh Khanna).

Kiah (Sanaa Mirza), the landlord's daughter, is a teenager (you wish!) with weird abilities, who falls in love with Krish. Her other weird abilities include seeing through closed closet doors, talking to animals, blasting birthday cakes with her look, wishing death upon people she doesn't like (including an old lover, and also her best friend, who die of mysterious circumstances), and believing she can pass off as a school-kid just by appearing in every shot on a bicycle.

After a few days, Radhika joins Krish once more in Mauritius, and the snubbed Kiah resorts to tactics that could threaten - this movie out of the theatre, we mean. She writes 'ILU KRISH' on beach rocks, tells Radhika to back off, and sets a swarm of honeybees on the beach-camping couple through her 'intuitive' powers. She even steals Krish's childhood photo, and lights candles all around it in her underground 'hide-out'. Creepy enough without having to endure the acting skills of a wet candle. Meanwhile, a lipsticked police officer (Johnny Lever), supposedly on the case of the mysterious murders in Mauritius, keeps hallucinating that he is Aishwarya Rai, and adds to the Zs.

Radhika, who is sufficiently spooked by this stalker, tries to warn Krish, but he just thinks the teen will outgrow the crush. Then, something happens, Kiah lands in the asylum (spoiler starts here) and what you've wanted all along, for 2 hours and 15 minutes, finally happens. The credits start rolling. Oh, that is, after Kiah slits her own wrist.

You ought to expect nothing from a film that is probably seeing the light of day after ages - Johnny Lever's jokes on Aishwarya Rai are dated only upto the time of her engagement. All the actors seem like toddlers could teach them a thing or two about changing expressions. Rajesh Khanna seems like he doesn't want to be caught dead in this flick, but can save matters by acting blind!

In all, the film is something that you wouldn't bother with, unless you are in awe of cats appearing out of nowhere and landing on the seat next to you.
Share. Save. Connect.
Tweet
KAASHH MERE HOTE SNAPSHOT

ADVERTISEMENT
This page was tagged for
Kaashh Mere Hote hindi movie
Kaashh Mere Hote reviews
release date
Sneha Ullal, Sanaa Mirza
theatres list
Follow @fullhyderabad
Follow fullhyd.com on
About Hyderabad
The Hyderabad Community
Improve fullhyd.com
More
Our Other Local Guides
Our other sites
© Copyright 1999-2009 LRR Technologies (Hyderabad), Pvt Ltd. All rights reserved. fullhyd, fullhyderabad, Welcome To The Neighbourhood are trademarks of LRR Technologies (Hyderabad) Pvt Ltd. The textual, graphic, audio and audiovisual material in this site is protected by copyright law. You may not copy, distribute, or use this material except as necessary for your personal, non-commercial use. Any trademarks are the properties of their respective owners. More on Hyderabad, India. Jobs in Hyderabad.