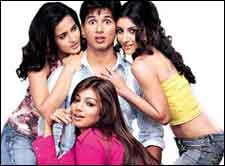 Rohit Murari / fullhyd.com
EDITOR RATING
5.0
Performances
Script
Music/Soundtrack
Visuals
NA
NA
NA
NA
Suggestions
Can watch again
NA
Good for kids
NA
Good for dates
NA
Wait to rent it
NA
Most of us know Ross Gellar as the guy whose first wife was a lesbian, and whose second wife pulled off what Britney Spears made infamous (i.e. annulling a 55-hour marriage). But the man had resolve, or spurts of masochism, in him, and he plunged head first into Rachel Green, no innuendo intended (neither on head nor on plunge).

Nikhil Mathur (Shahid Kapoor) idolizes him. He is totally into Neha (Soha Ali Khan), until she suddenly realizes that something is very wrong. She belongs to the skies, not to a place called Samarpur. Good for her. No one in their right minds, or otherwise, would want to live in a place that does not exist, even if it is a phoren location masking for it, which, mind you, is not the only illogical thing in the movie.

Neha goes to Mumbai to become an air-hostess, and he goes after her to woo her back. If coincidence had not taken its toll, he would never have bumped into Shagun (Ayesha Takia) on VT station. He falls on her, and she for him. And if coincidence had not been pushed beyond boundaries, then we would never have had a music store where Sara (Tulip Joshi) works, situated bang opposite Neha's office.

Three girls, one guy. All in the same city, living just a few blocks apart. Sadly, Hugh Hefner had nothing to do with the screenplay of the movie. The guy who did, had his own ideas, not very good though. He gets Neha to dump Nikhil, Sara to chum him, and Shagun to constantly fume at him.

A duet with Nikhil later, Sara tells him that she is engaged to be married to the man of her dreams, the man who is going to keep her happy, and other such yadda yadda. Picking up the pieces of his heart, and the audience's belief that they are watching a movie, this time is Shagun. Nikhil also thinks that two bad turns need not necessarily mean that he should shut his options for a third one.

Everyone is happy, none more so than the audience because they should be able to leave any moment now. But the wet blanket that Neha is, she decides to come back into his life and kiss him at the very instance Shagun decided to walk in on them. What should only have resulted in a minor delay to give him enough screen time to explain to Shagun, stretches into a pregnant pause when Sara re-enacts the scene with Nikhil a few minutes later.

Now all know what to hope for – the mother of all illogical sequences by way of which Sara and Neha, with some help from Rehman (Gulshan Grover), get Nikhil and Shagun together.

Thankfully, the movie ends. But the audience's disbelief does not. May be it was the seven rainbows in the sky or the inability of the actors to do anything more than look good, something had taken over the junta. For a full one minute after the credits had rolled, not one soul stirred in the theater.
Share. Save. Connect.
Tweet
DIL MAANGE MORE SNAPSHOT

ADVERTISEMENT
This page was tagged for
Dil Maange More hindi movie
Dil Maange More reviews
release date
Shahid Kapoor, Ayesha Takia
theatres list
Follow @fullhyderabad
Follow fullhyd.com on
About Hyderabad
The Hyderabad Community
Improve fullhyd.com
More
Our Other Local Guides
Our other sites
© Copyright 1999-2009 LRR Technologies (Hyderabad), Pvt Ltd. All rights reserved. fullhyd, fullhyderabad, Welcome To The Neighbourhood are trademarks of LRR Technologies (Hyderabad) Pvt Ltd. The textual, graphic, audio and audiovisual material in this site is protected by copyright law. You may not copy, distribute, or use this material except as necessary for your personal, non-commercial use. Any trademarks are the properties of their respective owners. More on Hyderabad, India. Jobs in Hyderabad.