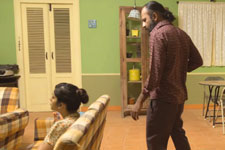 Swaroop Thotada / fullhyd.com
EDITOR RATING
4.0
Performances
Script
Music/Soundtrack
Visuals
7.0
3.0
7.5
8.0
Suggestions
Can watch again
No
Good for kids
No
Good for dates
No
Wait for OTT
Yes
Non-linear narration might sound so passé internationally, but it still is a method seldom dabbled with in our regional films. And regardless of how familiar you find the technique, you feel a ripple of thrill if it's pulled off well. That's what makes this approach so dependable for filmmakers. And it sure makes the narrator look smart and in control of his subject matter.

However, this very handy tool can appear wannabe when it ends up as more of a stunt than a strategy. Phanindra Narsetti, the writer, editor and director of Manu, is well-versed in this area, but seems to be too blinded by his love of the method to assess whether the story he chose actually benefits from it or not.

Because the big reveal in Manu once the pieces are put together is not only preposterous but also unrewarding of your patience. You are mostly confused for most of the first half, as the director stitches scenes out of their chronological order just because he can. You are made to sit through painfully expository episodes of murders that are neither thrilling nor take the plot forward. Sure, the details are metaphorical and symbolic of the film's philosophy (however inane it may be), but the film's self-imposed seriousness sadly doesn't allow any fun whatsoever. These scenes are pain-stakingly constructed and unbelievably well-detailed, but with the ridiculous twists towards the end, they feel like just self-indulgent stunts from a director who shot himself in the leg by choosing to edit his own film. At a length of three hours Manu feels outright boring.

So Manu (Raja Gautham) is an artist on the fictional island of Sia which is sparsely populated after a plague and is just a safe haven for smugglers and sailors. You do not see anyone else other than the characters in this story, and that makes this environment too uninviting. This should work to the film's advantage as it wants to make you feel lonely along with its characters. Perhaps the atmosphere is an extension of the loneliness that the lead pair complains of, but it feels more like an excuse for the film's low budget and less like an artistic choice. You never get to see the outdoors during the day as the camera stubbornly refuses to go into the sun, and you don't really buy that whole setting of the island.

Anyway, here we meet Neela (Chandini Chowdary), a photography enthusiast who happens to have a long list of hobbies to help her escape the loneliness. We see Manu catching rats only to release them into some houses so as to smoke out some people into the traps he's set for them. Seemingly incoherent scenes follow one another that make sense later and reveal the motives of these characters, but as we said before, the revelation doesn't make anyone happy.

What you get are technical exercises that are their own rewards. Viswanath Reddy's cinematography is meticulous in framing the theme and the characters. The debutant technician is the film's invisible star and saviour with his edgy shots and brilliant lighting techniques - indeed, Manu features some of the most innovative shots you have seen in recent films.

He is aided by the wonderfully detailed art design that conveys more about the characters than the platitudes they spout too often. Naresh Kumaran's soundtrack is as effective as the film demands it to be, but the movie could have used some silence at places.

Raja Gautham is earnest in his performance, and Chandini Chowdary switches between gullibility and strength with ease. John Kottolly plays a tenant who can't keep it in his pants, and he is the best actor in the film. It's a strange choice not to go for visual effects when the story involves ghosts and supernatural elements, and it doesn't pay off.

Phanindra Narsetti was an internet sensation when he made the one-hour short Madhuram for Youtube. That film was so well-received and celebrated that it is almost impossible for anyone into short films to not know about it. Before that he made another excellent short called Backspace using an iPhone. Madhuram is about how a guy meets a girl in a coffee shop and convinces her of his love in just an hour. That talkfest, which featured clever-sounding yet hollow platitudes about love and life, wooed everyone, but unfortunately it seems it taught Narsetti all the wrong lessons.

In Manu, his quasi-philosophical voiceover appears out of place, being placed at completely random places. It is very obvious that the director wants to be seen as in the Nolan/Fincher league - and he clearly has the intellect and the skill for that, but only if he can learn to put his product ahead of him and not vice versa. All through Manu we can see his eagerness to sound smart ringing at a higher volume than it should. If Sukumar's career graph is any indication, this objective could be fatal to a filmmaker. Also, the skill of a filmmaker is seen in how simply he unfolds a complex subject, and not the other way around.
Share. Save. Connect.
Tweet
MANU SNAPSHOT 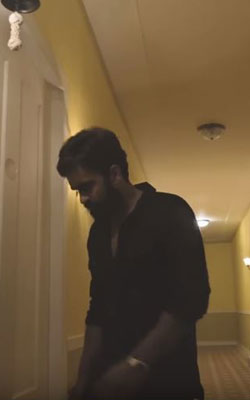 ADVERTISEMENT
This page was tagged for
manu movie review
Manu Movie Review
telugu manu movie about
Manu telugu movie
Manu reviews
Follow @fullhyderabad
Follow fullhyd.com on
About Hyderabad
The Hyderabad Community
Improve fullhyd.com
More
Our Other Local Guides
Our other sites
© Copyright 1999-2009 LRR Technologies (Hyderabad), Pvt Ltd. All rights reserved. fullhyd, fullhyderabad, Welcome To The Neighbourhood are trademarks of LRR Technologies (Hyderabad) Pvt Ltd. The textual, graphic, audio and audiovisual material in this site is protected by copyright law. You may not copy, distribute, or use this material except as necessary for your personal, non-commercial use. Any trademarks are the properties of their respective owners. More on Hyderabad, India. Jobs in Hyderabad.