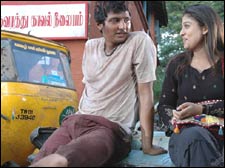 EDITOR RATING
1.0
Performances
Script
Music/Soundtrack
Visuals
NA
NA
NA
NA
Suggestions
Can watch again
NA
Good for kids
NA
Good for dates
NA
Wait for OTT
NA
Several people ask us if we have a problem with dubbing movies. Okay, not several, but a few people do ask us. Oh heck, okay, nobody asks us. But then, why should we answer only those questions that are asked? Do we ask only those questions that are answered? Same logic.

Anyway, let's set the record straight on this once and for all - we do not have a problem with dubbing movies. You can show us as many dubbing movies as you want, and we'll still be rooting for more. In fact, the fullhyd.com internal record is held by a colleague of ours who once watched 14 dubbing movies in 2 days - at the end of it, his lip movement was not matching what he was saying!

So no sirree Bob - fullhyd.com reviewers are not ones to shy away from challenges. Which are aplenty when you sit in a theater screening E. Where normal reviewers wheeze and sputter and die, fullhyd.com reviewers last upto 7 times longer. Which is why fullhyd.com should be your preferred source for the review of E - we are the only ones who can guarantee that the review was written by the same guy who watched the movie.

E is to moviemaking what Arjun Singh is to India. The script is ostensibly aimed to make you sympathize with underprivileged and undereducated people born and brought up in slums, but all it does is cause antipathy in you, primarily due to how lousily it is written. E (Jeeva), an illiterate and unscrupulous ruffian who lives in a slum and cheats and steals for a living, wants to make lots of money, and is willing to do anything for it.

E gets in touch with an evil doctor, Ramakrishna (Ashish Vidyarthi), who experiments drugs banned in developed countries, on slum-dwellers who approach his hospital for free treatment, since pharma companies abroad pay him huge amounts of money for such research. Ramakrishna offers E a lot of money to kill Krishna Prasad (Pasupathy), a dangerous killer who's determined to kill Ramakrishna - an assignment E accepts gleefully since it's the big break he's been looking for.

In the meantime, Jyothi (Nayantara), a beautiful bar dancer who moves into E's neighborhood, falls in love with him in one of the sub-plots that really show the IQ backing this film. E has no redeeming feature - neither looks nor education nor maturity nor values - and it's unfathomable when Jyothi suddenly says in one scene that she's in love with him. And she stands by him even after does things like proposing that she get into the flesh trade so they can make money together, and beating her up ruthlessly.

You're assuming, of course, that some incident will make E suddenly turn over a new leaf, but alas, that never happens - you keep waiting for so long, you become perfect at it. Right till the end, E is a despicable lowlife creature, slowly convincing you this must be some weird art movie. Then 10 minutes to the end, the script puts some clichéd out-of-depth dialogues in E's mouth about why he's become how he is, to legitimize itself. And then he takes revenge against Ramakrishna since his grandmother is among the people who dies due to Ramakrishna's experiments.

E is the kind of movie that you should hire someone else to watch for you, even if you need to pay more since there is a shortage of people. The film tries to tread the thin line between being artsy and commercial, but it ends up treading that between crap and crappier. All that biowar hype in the hoardings is just that - that thing is almost like a parallel story, and a half-baked one at that, inserted to make the movie look different. For instance, the Krishna Prasad character is never fully explained.

Most Telugu audiences don't know Jeeva from William Dangkok, and the rest will wish they hadn't either. He cannot bring any life to the character, which itself is written pretty soullessly. Nayantara is the reason people are at the theaters. And no, this is not Vallabha. Someone had a lot of money and poor judgement, so the movie looks visually decent.

ADVERTISEMENT
This page was tagged for
e jeeva movie review telugu
E telugu movie
E reviews
release date
Jeeva, Nayantara
Follow @fullhyderabad
Follow fullhyd.com on
About Hyderabad
The Hyderabad Community
Improve fullhyd.com
More
Our Other Local Guides
Our other sites
© Copyright 1999-2009 LRR Technologies (Hyderabad), Pvt Ltd. All rights reserved. fullhyd, fullhyderabad, Welcome To The Neighbourhood are trademarks of LRR Technologies (Hyderabad) Pvt Ltd. The textual, graphic, audio and audiovisual material in this site is protected by copyright law. You may not copy, distribute, or use this material except as necessary for your personal, non-commercial use. Any trademarks are the properties of their respective owners. More on Hyderabad, India. Jobs in Hyderabad.