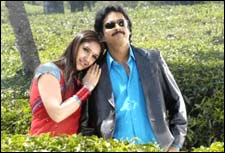 EDITOR RATING
3.0
Performances
Script
Music/Soundtrack
Visuals
NA
NA
NA
NA
Suggestions
Can watch again
NA
Good for kids
NA
Good for dates
NA
Wait to rent it
NA
A marriage to someone you are madly in love with can feel quite awesome. Especially if you are the one getting married to her. Pellikani Prasad shows the three main obstacles in that process - getting her to love you back, getting her father to agree to the marriage, and staying alive till the first half ends. Fans of Sivaji can come in after the first half ends, fans of Allari Naresh can leave after the first half ends, and fans of good movie-making can leave after finishing this paragraph.

Let's get the story out of the way first. Prasad (Allari Naresh) and Saroja (Sridevi) are in love, but Saroja's father (Raghuvaran) hates love marriages so much, he'd probably make a couple fall in love just to stop them from getting married. However, his hatred pays off in the case of Prasad, who's too dumb to get married to anyone anyway, love or no love. He emotionally blackmails Saroja to marry another Prasad (Sivaji) against her wishes.

The second half shows a flashback between the new Prasad and Saroja - how he falls in love with her, and how he tries desperately to woo her but gets spurned continuously. Does he land her? Where does the other Prasad come in from then? Who does Saroja marry? Who all die in the end? Will that include you? Who wrote the script for this? Where does he live? To know the answers to these and more questions, you'd have to watch the movie, just like us. Remember, there are no shortcuts to success.

Okay, the movie is not a tragedy - script-wise we mean. Only, it takes such liberties with the narration, it's basically cheating. Once the movie is over, you know that the first half is a complete conjob, with a huge chunk of it not making any sense. There's something called effort - if you want to mislead your viewers for a large part of the movie, you need to work hard enough and be smart enough to come up with a script that covers up every scene and red herring finally. If you are too lazy or too inept to do that, you have no business expecting people to pay to watch your output.

For a comedy, the film also has pretty poor jokes most of the time. Allari Naresh and Sivaji are the only real comic faces in the film (and maybe Chitram Srinu) - this is too low-budget to even afford the economy-class Tollywood comic crew. And while the duo are talented, in the absence of good script- and dialogue-writing, they can't do much. In fact, you have an ominous suspicion about the quality of the film in the first 10 minutes itself, with the random beginning (a song picturized on Sridevi for no rhyme or reason).

Sridevi is pretty good in what she needs to do, and so actually are Raghuvaran and the rest of the cast. The film will sink, so there's no way any of the thoroughly ordinary songs (including the item number by Tanu Rai) will ride any tide to become popular.

Skip Pellikani Prasad for a good experience. And skip it fast, for it will leave theaters really soon.
Share. Save. Connect.
Tweet
PELLIKANI PRASAD SNAPSHOT

ADVERTISEMENT
This page was tagged for
pelli kani pelli old movie
pelli kani prasad telugu movie review idle
Pellikani Prasad telugu movie
Pellikani Prasad reviews
release date
Follow @fullhyderabad
Follow fullhyd.com on
About Hyderabad
The Hyderabad Community
Improve fullhyd.com
More
Our Other Local Guides
Our other sites
© Copyright 1999-2009 LRR Technologies (Hyderabad), Pvt Ltd. All rights reserved. fullhyd, fullhyderabad, Welcome To The Neighbourhood are trademarks of LRR Technologies (Hyderabad) Pvt Ltd. The textual, graphic, audio and audiovisual material in this site is protected by copyright law. You may not copy, distribute, or use this material except as necessary for your personal, non-commercial use. Any trademarks are the properties of their respective owners. More on Hyderabad, India. Jobs in Hyderabad.