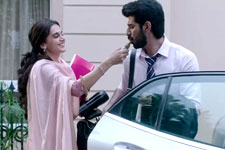 T J Reddy / fullhyd.com
EDITOR RATING
7.0
Performances
Script
Music/Soundtrack
Visuals
6.0
6.0
7.0
6.0
Suggestions
Can watch again
Yes
Good for kids
No
Good for dates
Yes
Wait to rent it
No
If there is one thing Thappad gets right, it is not taking the issue of domestic violence it is trying to address to the floors of a court. What happens in a (movie) court is theatre. With theatre, a certain group of people grab on to viewpoints they find comfort in, no matter how wrong they are. This happened with Pink and subsequently with Sinha's own Mulk.

If a court and bombastic speeches aren't settling this contentious issue, how does Thappad address it and justify its nearly two-and-a-half-hour runtime?

Well, Thappad begins unassumingly like any other movie would. We have Vikram, the husband, Sabarwal (Pavail Gulati) who shares his life with Amrita, the wife, Sabarwal (Taapsee Pannu). She wakes up at 6 am each morning, makes her tea, makes his breakfast, makes their bed, makes her mother-in-law take her blood sugar tests, makes life easy for their maid, and makes her home a place of comfort for all simply because she finds pleasure in being a homemaker. With Amrita taking care of the Homefront, Vikram finds himself excelling at work. His hard work lands him a job in London.

So far, so good? Not quite.

The unassuming veneer is abruptly yanked away on one fateful night at a party set in the Sabarwal household. What begins as a heated argument between Vikram and one of his bosses ends with Amrita being on the receiving end of a slap across her face.

The party rages on through the night for everyone else but for Amrita and the select few who witnessed the incident, and the silence following the act is more deafening than whatever modern-day remix of a classic song plays over the sound system. Every part of the Sabarwal household is forced to face the consequences of one Vikram's actions and one Amrita's reaction to them.

Post-incident, the film's colour palette quickly turns mute and Amrita is seen clad in white. While the white garb acts as a constant yet subtle visual reminder of the state of mourning Amrita finds herself in, the visual aesthetic overtly powers the message to the viewers in the backseats.

Anubhav Sinha wants to make a film that addresses social evils. Anubhav Sinha also wants to make a film about social issues which is simultaneously commercially viable. Now there are only a handful of filmmakers who possess the tools required to convey complex ideas with multiple dimensions while making them cinematic and accessible, and Sinha isn't one of them. He makes the complex, simple, and makes the simple, palatable. He isn't a man who hides the inciting incident a la Aniruddha Roy Chowdhury of Pink - he places it front and centre, and soon drains his film of any colour or levity to convey the seriousness of the matter at hand.

While this approach is bound to bother a seasoned movie-goer, Sinha finds this tactic necessary to convey his point of view to a regular member in the audience. The handful of the vast cast of characters in the movie are short-changed in the same way as well. Characters who begin with promise become stereotypes owing to some trope-y characterization.

This isn't to say that there aren't strokes of excellent filmmaking hidden throughout the film. The opening sequence that introduces the audience to the movie's main characters, all knit together by a humble piece of orange candy ice cream, is masterfully done. It is a sequence that effectively uses a disposable piece of ice cream as a metaphor for the state of each and every relationship being explored, and the shattering of one on the cold hard Delhi road acts as foreshadowing for things to come.

Another example of smart filmmaking comes in the form of Dia Mirza's Shivani who plays a single, working mother who neighbours the Sabarwal household. Shivani lives in a similar villa as and drives a better car than the one Vikram does. But unlike Vikram, she never complains about her work, nor does she make it a priority over her daughter's well-being. Shivani's character is peppered throughout the film to show the effect a good relationship and a strong mindset has on a person. And it is achieved more in show than in tell.

We chose to talk about the filmmaking at hand rather than the "politics" of the film simply because physically or emotionally abusing another human being is inhumane. It is reprehensible when our "heroes" slap comedians on screen for cheap laughs, and it is reprehensible when a man or a woman hurts their significant other or their children. A stronger person who goes off on a weaker person is not a hero or a lover who is expressing his/her emotions - he/she is a bully.

The movie attempts to ride the line between being a lowest common denominator social melodrama and a piece of art attempting to address serious societal ills, and the balance tips in the favour of the latter simply because of the stellar cast Thappad has at its disposal. Taapsee Pannu has made a career out of acting the absolute hell out of challenging roles, and this one is no different. While it isn't a career best by any means - it is hard to top her turn in Pink - it is a worthy contender.

Pavail Gulati, Dia Mirza, Maya Sarao, Tanvi Azmi, a stellar Geethia Vidya and Naina Grewal round out the cast quite well. Special mention goes to Kumud Mishra and Ratna Pathak Shah who play a happily married couple whose happiness came at a chosen price to one and forced price for the other.

Speaking of choosing prices, we hope Bobby Krlic gets a word of thanks from Mangesh Dhakde as the latter bases his score for Thappad on the former's musical prowess in, the excellent, Midsommar. The score conveyed grief both garishly and eloquently in Midsommar, and the score used here does the same as well. While this is a good example of a good artist borrowing, Sinha should have refrained from stealing his visual aesthetic from Article 15 and repurposing it with his newest venture.

However, one can see the growth of Anubhav Sinha as a serious filmmaker from Ra.One to Mulk, from Mulk to Article 15 and from Article 15 to Thappad. We hope there comes a day when he puts all his learning into one excellently crafted movie about the society we live in, but until then good enough will have to suffice. 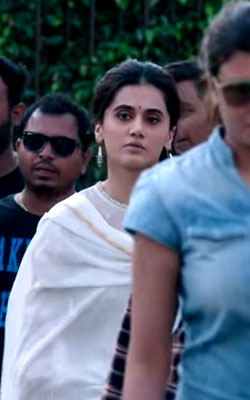 ADVERTISEMENT
This page was tagged for
Thappad hindi movie
Thappad reviews
release date
Taapsee Pannu, Pavail Gulati
theatres list
Follow @fullhyderabad
Follow fullhyd.com on
About Hyderabad
The Hyderabad Community
Improve fullhyd.com
More
Our Other Local Guides
Our other sites
© Copyright 1999-2009 LRR Technologies (Hyderabad), Pvt Ltd. All rights reserved. fullhyd, fullhyderabad, Welcome To The Neighbourhood are trademarks of LRR Technologies (Hyderabad) Pvt Ltd. The textual, graphic, audio and audiovisual material in this site is protected by copyright law. You may not copy, distribute, or use this material except as necessary for your personal, non-commercial use. Any trademarks are the properties of their respective owners. More on Hyderabad, India. Jobs in Hyderabad.