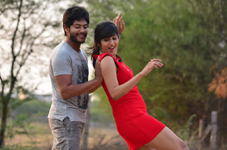 Ravi Kandala / fullhyd.com
EDITOR RATING
2.0
Performances
Script
Music/Soundtrack
Visuals
2.0
2.0
2.0
2.0
Suggestions
Can watch again
No
Good for kids
No
Good for dates
No
Wait to rent it
No
There are times when product placements feel more like messages from God. Take Ketugadu, for instance. In the hero's introduction scene, he is running on a road where there is a giant hoarding for Saridon tablets right behind him. Halfway through the movie, there is a scene where someone switches the TV on and sees a Saridon advertisement. In an item song in the movie, the girl dances in front of hoardings of Saridon. And by the time you walk out of the movie, you will surely be in need of a Saridon.

The utter inanity that Ketugaadu is, is indeed a wonder. The film starts off with Chandu (Tejus) stealing a car with the help of a friend. He then goes to a pub to steal another car, sees a girl there (Akhira played by Chandini Chowdary) and dances with her. He then goes home, finds her on Facebook and sends her a friend request. She accepts, and chats with him, too. If finding her without even knowing her name seems strange, hang on.

He sees that she's off to a farmhouse the next day, and decides to follow her. So far, so good. While following her, he suddenly spots a convertible Mercedes, parks his bike next to it and steals it. Five minutes later, he finds the girl in the boot of the car. Ten minutes later, there's breaking news on TV that the girl has been kidnapped and he is the kidnapper. He then calls the girl's brother Prakash (Rajeev Kanakala), and tells him that he does not have anything to do with the kidnap. Prakash tells him to kidnap his sister and offers him five crores for doing that. And in the middle of all this drama, Akhira tells Chandu that he loves him.

The rest of the plot involves a random guy (Ajay) who runs around trying to kill Akhira. Somewhere along the way, it is revealed that Akhira has received an eye transplant from some industrialist whose retina is a password to his empire, and Ajay wants her eyes. And by the time the movie ends, you are nearly plucking your eyes out, and, yes, desperately in need of a Saridon.

Director Kittu Nalluri burdens this mess of a plot with comic tracks that bring out the violent tendencies in you. Towards the end around 10 new characters are introduced each of who has barely a scene or two. The only person who needs to be commended here is the editor for having made sense of such a hotchpotch and put something out for the theaters.

The less we talk about the acting, the better it is - this is a family website, and there is only so much profanity that is allowed. Tejus and Chandini Chowdary barely manage to lip-sync, and the love story is laughable. Saptagiri's comedy is so irritating, we think it is time to start a relief fund. If it is only money that this guy is acting for, it is better if we gave him the money and asked him to spare us.

Most of the songs play out in the background, and you'll be thankful for that. Techincally, too, the film is no great shakes.

We wish that the producers of this flick, whatever their connection with Saridon is, realized that hoardings and TV ads are enough to promote the pill. They didn't have to boost sales by making a headache-inducing flick.
Share. Save. Connect.
Tweet
KETUGADU SNAPSHOT 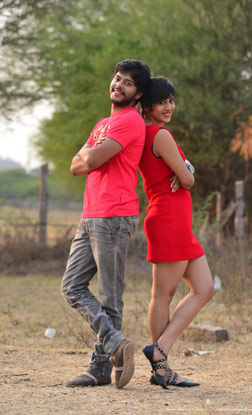 ADVERTISEMENT
This page was tagged for
Ketugadu telugu movie
Ketugadu reviews
release date
Tejus Kancherla, Chandini Chowdary
theatres list
Follow @fullhyderabad
Follow fullhyd.com on
About Hyderabad
The Hyderabad Community
Improve fullhyd.com
More
Our Other Local Guides
Our other sites
© Copyright 1999-2009 LRR Technologies (Hyderabad), Pvt Ltd. All rights reserved. fullhyd, fullhyderabad, Welcome To The Neighbourhood are trademarks of LRR Technologies (Hyderabad) Pvt Ltd. The textual, graphic, audio and audiovisual material in this site is protected by copyright law. You may not copy, distribute, or use this material except as necessary for your personal, non-commercial use. Any trademarks are the properties of their respective owners. More on Hyderabad, India. Jobs in Hyderabad.