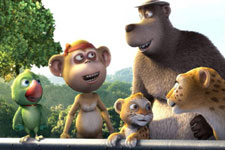 Kritika Deval / fullhyd.com
EDITOR RATING
5.0
Performances
Script
Music/Soundtrack
Visuals
5.0
4.0
4.0
6.0
Suggestions
Can watch again
No
Good for kids
Yes
Good for dates
No
Wait for OTT
Yes
When a student who's been constantly performing badly suddenly goes a step above average, it's a rather pleasant surprise. More importantly, it's a moment of triumph for the kid, for its teachers, and for its family. And that is what Delhi Safari is for the Indian movie industry.

The rather run-of-the mill story tries to cash in on the popular "Save The Planet" ethos du jour amongst the multiplex youngsters. So you have Yuvraj, the leopard cub (Swini Khara), living blissfully in the forest with his mother the Queen (Urmila Matondkar), and father the Sultan (Suneil Shetty). They're a perfect little family living in Sanjay Gandhi National Park, better known to locals as Borivali National Park. They all live happily alongside other animals ...a mite too happily, we might add (predator and prey joining in song and dance to get predator's wife out of a miff, seriously?).

Soon, there is trouble in paradise in the form of evil bulldozers and gun-toting men razing down the forest. The rest of the movie is a rather irritatingly and unnecessarily long tale of the journey of the queen, the cub, Bajrangi the irascible monkey (Govinda), Bagga the know-it-all bear (Boman Irani), and Alex the modernity-loving mitthu (Akshaye Khanna).

The animation is decent but nothing to write home about. Every other moment in the plot is a Disney-generated "inspiration" (read: near blatant rip-off of The Lion King). One scene in particular, involving forbidden lands and wily hyenas, has been pretty much lifted from The Lion King.

The plot moves way too slowly, all thanks to unnecessarily long fillers that don't do much to add to the story. A good fifteen minutes of the movie involves the lead cast running from a bunch of bees. The scene looks good, but it would've been better if it had been kept under five minutes.

The performances are mostly forced, except a moment or two that strike a chord with the audience. In fact, the only performance that is consistently good is that of the cub. Kudos to Swini Khara.

The music is a major irritant whichever way you see it. Shankar-Ehsaan-Loy can do better. There are way too many songs, none of which is good.

In the end, however, what let the movie down the most are not its ripped-off scenes or the sucky music or even the not-quite-juicy plot. It's simply that kids these days have much better fare in the hard drives of their computers.

Delhi Safari is watchable only if you want to see a Hindi animated movie that is a cut above its predecessors. If it is a good cartoon film that you're looking for, you're better off with your DVD of The Lion King, or Madagascar, or Rio or a zillion others.
Share. Save. Connect.
Tweet
DELHI SAFARI (3D) SNAPSHOT 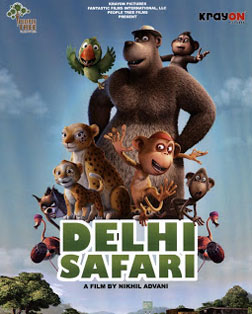 ADVERTISEMENT
This page was tagged for
3gp movie delhi safari hindi
delhi safari movie in hindi 3gp movies
delhi safari movie for pc
delhi safarihd movie
delhi safari hd movie in hindi
Follow @fullhyderabad
Follow fullhyd.com on
About Hyderabad
The Hyderabad Community
Improve fullhyd.com
More
Our Other Local Guides
Our other sites
© Copyright 1999-2009 LRR Technologies (Hyderabad), Pvt Ltd. All rights reserved. fullhyd, fullhyderabad, Welcome To The Neighbourhood are trademarks of LRR Technologies (Hyderabad) Pvt Ltd. The textual, graphic, audio and audiovisual material in this site is protected by copyright law. You may not copy, distribute, or use this material except as necessary for your personal, non-commercial use. Any trademarks are the properties of their respective owners. More on Hyderabad, India. Jobs in Hyderabad.