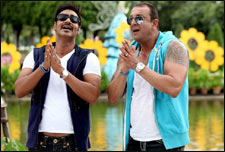 Nupur Barua / fullhyd.com
EDITOR RATING
4.0
Performances
Script
Music/Soundtrack
Visuals
5.0
3.0
4.0
5.0
Suggestions
Can watch again
No
Good for kids
No
Good for dates
No
Wait to rent it
Yes
With Rohit Shetty and his ilk taking over slapstick comedy in Bollywood, the original funny man, David Dhawan, seems to be facing certain insecurities. So much so that he decided, one muggy day in Mumbai, that it was high time he made his presence felt. Of course, with the inanity that makes Golmaal and the like blockbusters, he played it safe and just hashed together a few recent hits, and some of his old movies, to give birth to his latest - Rascals.

Chetan (Sanjay Dutt) and Bhagat (Ajay Devgn) are 2 con men who meet on a flight to Bangkok. They assess and realise each other's line of work, but what they do not know is that they are both hunted by the same man - Anthony (Arjun Rampal) - whom they had both conned on the same day.

Since there is place for only one con man in Bangkok (based on intensive research, no doubt), both Chetan and Bhagat try to outdo each other (the makers of the film obviously thought that Chetan-Bhagat will become as big a household name as Jai-Veeru, but one wonders what the author of Five Point Someone has to say).

Chetan pretends to be a spiritual leader, who preaches the "Art of Giving" (a pot shot at Sanjya Dutt's ex-wife Rhea Pillai's association with the Art of Living, perhaps?). To perfect the con, he arranges seminars and such. Khushi, apparently influenced, announces a marathon for the blind, and Bhagat participates, pretending to be visually-impaired, of course.

The rest of the movie, defying all logic, is about how the two men try to woo her. Bhagat gets to feel her up more than necessary, and Khushi seems to love it. There is no story - individual scenes, laid out in no particular order, have a few funny moments, but the forced comedy may leave you with a bitter taste in your mouth. The two actors spoof (for lack of a better word) some of their past works, but the humour is lost on most viewers.

Surprisingly, Sanjay Dutt is more restrained than Ajay Devgn, as far as acting is concerned. He seems to have finally found his calling as a comic actor. Some of his expressions more than make up for the headache caused by the movie.

Ajay Devgn screams out most of his dialogues, as does Kangna. This, in recent times, has become an acceptable method of portraying comedy. Kangna wears very little, and her surgically enhanced assets outshine her performance. Lisa Haydon, who plays a call-girl, wears even less, but at least she manages to look appealing.

Chunky Pandey has aged, and seems to be satisfied with minimal screen time. Arjun Rampal tries his best to speak with a Mumbai-Catholic accent, and almost succeeds. He also seems a little more at ease spewing nonsensical dialogues. Satish Kaushik is wasted, again.

The music lacks soul, and is abrupt at times. Film buffs may have a problem with Sanjay Dutt breaking into hip-hop, but then, this movie is not for them. Production design is unimpressive, and so is the cinematography.

Rascals is avoidable, except for the animated title sequence. David Dhawan should have cast Govinda, his lucky charm, or perhaps considered looking at some honestly-written comedies.
Share. Save. Connect.
Tweet
RASCALS SNAPSHOT

ADVERTISEMENT
This page was tagged for
Rascals hindi movie
Rascals reviews
release date
Sanjay Dutt, Ajay Devgn
theatres list
Follow @fullhyderabad
Follow fullhyd.com on
About Hyderabad
The Hyderabad Community
Improve fullhyd.com
More
Our Other Local Guides
Our other sites
© Copyright 1999-2009 LRR Technologies (Hyderabad), Pvt Ltd. All rights reserved. fullhyd, fullhyderabad, Welcome To The Neighbourhood are trademarks of LRR Technologies (Hyderabad) Pvt Ltd. The textual, graphic, audio and audiovisual material in this site is protected by copyright law. You may not copy, distribute, or use this material except as necessary for your personal, non-commercial use. Any trademarks are the properties of their respective owners. More on Hyderabad, India. Jobs in Hyderabad.