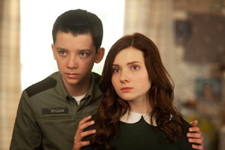 Kritika Deval / fullhyd.com
EDITOR RATING
7.0
Performances
Script
Music/Soundtrack
Visuals
8.0
7.0
7.0
8.0
Suggestions
Can watch again
Yes
Good for kids
Yes
Good for dates
Yes
Wait to rent it
No
Looks like we just don't like our kids anymore. Or maybe we're finally beginning to see how much cuter they look battling for life or death amidst unfathomable psychological and physical torments. At the beginning of Ender's Game, you see 12-year-old Ender Wiggin (Asa Butterfield) fly off into outer space to a backdrop of snowy mountains. It doesn't take a long shot of imagination to picture Katniss Everdeen somewhere in a dome waiting for life-saving medicine. It isn't so difficult either to imagine that somewhere in those dystopian mountains is a young Jaden Smith trawling a toxic atmosphere for oxygen.

Along the same vein follows Ender's Game, which puts one young boy in charge of our planet's future at a terrifying pace. The year is 2086, and our beloved planet has recently fended off an attack by insect-like aliens called Formics. Colonel Graff (Harrison Ford) of the International Fleet is now looking to groom a new hero to step into the shoes of Mazer Rackham (Ben Kingsley), the man whose genius won them the previous war.

To this end, young Ender, the "runt" of the family, is sent out to train at the Battle School which orbits around the Earth. During the course of his training, Ender is put through challenges more psychological in nature than physical.

Graff, who is fascinated by what he terms "Ender's complicated response to authority" (in lay terms: the boy takes no bullshit), takes full advantage of the power he wields over Ender to isolate him, to pit him against his peers, and to basically go Mad Scientist all over the boy despite the military psychologist's concerns about the boy's mental health.

Eventually, though, the boy Ender learns and grows and becomes... the boy Ender but just with more issues, and more capable of the kind of havoc Graff wants wreaked.

The various troubling issues with this movie aside (is this really the future of entertainment? perhaps the fictional dystopia has already arrived...), plot-wise, it is perfect. It takes an epic-sized story and squeezes it down to 2 hours without letting go of any of the inherent tension or drama. While this is too short a time-span to develop relationships in the same way as in the novel on which the book was based, we do get to see Ender's development with great and disturbing clarity.

Asa Butterfield was made for this role. The child who rent our heartstrings in cinematographic gems like The Boy In The Striped Pajamas and Hugo has grown into a young boy who can portray complexity like it's nobody's business. All of his character's weariness, vulnerability and immeasurable strength is plain on his face at all times for anybody to see.

Harrison Ford lives his role as the slightly psychotic commander who has lost the ability to treat a child with the gentleness he deserves. Ben Kingsley plays a minor but interesting role of a Jedi-like commander.

The graphics are everything you could hope for in a Gavin Hood film. There are fight sequences so wonderfully choreographed, someone coming in late could easily be forgiven for thinking that it is a futuristic ballet sequence.

The Verdict: While Hollywood seems to have lost the ability to lighten our hearts, it can still wow us with stunning graphics and awe us with the complexity of human resilience and emotions.
Share. Save. Connect.
Tweet
ENDER'S GAME SNAPSHOT 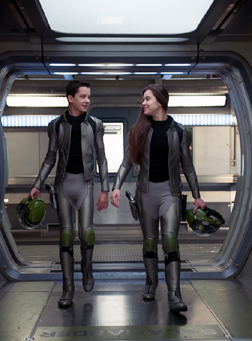 ADVERTISEMENT
This page was tagged for
Ender's Game english movie
Ender's Game reviews
release date
Asa Butterfield, Harrison Ford
theatres list
Follow @fullhyderabad
Follow fullhyd.com on
About Hyderabad
The Hyderabad Community
Improve fullhyd.com
More
Our Other Local Guides
Our other sites
© Copyright 1999-2009 LRR Technologies (Hyderabad), Pvt Ltd. All rights reserved. fullhyd, fullhyderabad, Welcome To The Neighbourhood are trademarks of LRR Technologies (Hyderabad) Pvt Ltd. The textual, graphic, audio and audiovisual material in this site is protected by copyright law. You may not copy, distribute, or use this material except as necessary for your personal, non-commercial use. Any trademarks are the properties of their respective owners. More on Hyderabad, India. Jobs in Hyderabad.