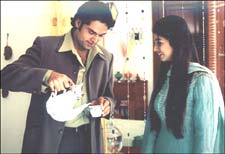 EDITOR RATING
5.0
Performances
Script
Music/Soundtrack
Visuals
NA
NA
NA
NA
Suggestions
Can watch again
NA
Good for kids
NA
Good for dates
NA
Wait for OTT
NA
We Indian audiences have willingly let ourselves be tossed around from genre to genre of hopskotching movie-making, but some quirky beliefs of our stodgy minds have still refused to be swatted out. One of them is that our 'hero' can be a dud, he can be incapacitated, he can be a slime bucket who eventually flips to tow the righteous line, but he cannot be a self-seeking crook who triumphs in the end. That wouldn't be the 'hero', right?

Socha Na Tha has a hero who mercilessly dumps a wide-eyed girl he's loved for 3 years - after proposing marriage to her and formalizing it between the families - since he falls in love with another girl whom he's originally courted on the sly. It has a heroine who bolts from an engagement to a man who loves her, a man who you can't grudge a single fault for that fate. The two live happily ever after.

Somehow, this doesn't seem like true love overcoming all obstacles. The pity is, several youngsters around the country who regard such movies will start to think that one should follow one's heart even if it means cruelly breaking someone else's. You might as well make a film about a serial rapist-murderer who successfully molests more women and lives happily ever after.

Viren (Abhay Deol) is in love with Karen (Apoorva Jha), and so when he needs to indulge his family and visit Aditi (Ayesha Takia) for a prospective alliance, he chirps this out to her, and they mutually decide that he'll reject her. This turns the families into foes due to some unreasonable behaviour by Aditi's folks.

However, Viren runs into Aditi again, and soon an intimate friendship blossoms that shouldn't have blossomed in the first place but for Viren fooling himself into believing that there's nothing wrong in hanging out on the stealth with another girl who's "just a good friend", when he is steady with Karen.

In his confused state he proposes to Karen, and a Herculean battle is fought by them to win over both families since they are from different religions, but now he is well and truly in the dock over Aditi. He decides that Karen will have to pay the price for that, and calls off the engagement, emotionally torpedoing her and her parents. However Aditi cannot jettison her family who hate Viren and his parents, and promises them that she'll marry their choice, telling Viren there's no future.

A distraught Viren finds solace in his family, who accept him after all that he's done and induct him into the huge family business, but Karen plays Cupid and gets Aditi to be runaway bride, as the latter vamooses from her engagement to a childhood friend. The climax is lame, trying disastrously to stand on its own feet and finding it hasn't any.

Apart from being based on a morally dubious plot, the film splatters all over itself as it moves into the second half, with no entertainment in an all-uphill losing battle by a witless Viren trying to fend off a terribly excited avalanche. It has its moments in a bit of humor in the first half, in some great acting by young Ayesha Takia and in some melodious songs, but there's nothing that makes you caw in glee after like 30 minutes.

Apoorva Jha as the jilted lover and Ayesha Jhulka as the enterprising bhabhi play good parts, the latter especially noteworthy. Abhay Deol needs a haircut, but he does a fair job of making you frustrated by the character he plays. All performances are good.

This one could have been a good teenybopper romance but for the misjudgement in plot.
Share. Save. Connect.
Tweet
SOCHA NA THA SNAPSHOT

ADVERTISEMENT
This page was tagged for
Socha Na Tha hindi movie
Socha Na Tha reviews
release date
Abhay Deol, Ayesha Takia
theatres list
Follow @fullhyderabad
Follow fullhyd.com on
About Hyderabad
The Hyderabad Community
Improve fullhyd.com
More
Our Other Local Guides
Our other sites
© Copyright 1999-2009 LRR Technologies (Hyderabad), Pvt Ltd. All rights reserved. fullhyd, fullhyderabad, Welcome To The Neighbourhood are trademarks of LRR Technologies (Hyderabad) Pvt Ltd. The textual, graphic, audio and audiovisual material in this site is protected by copyright law. You may not copy, distribute, or use this material except as necessary for your personal, non-commercial use. Any trademarks are the properties of their respective owners. More on Hyderabad, India. Jobs in Hyderabad.