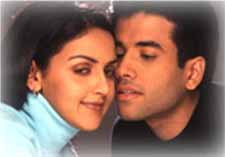 Kya Dil Ne Kaha is a mysterious movie. The mystery part of it takes off right from the word "go", since you can't ever be sure of what the real intention of making this movie was. How can anyone be sure when a whole bunch of people on the screen indulges in doing something so pointlessly hideous that you wish you had never been born - or, if you are a clearer minded thinker, that they had never been born? I could find solace only from the existence of bigger mysteries like Uday Kiran taking home the Filmfare.

The movie opens with a family as large as the Indian cabinet sobbing for its laadli ladki Esha (you-know-who), as she gets packing to New Zealand for you-know-what. Unfortunately, she doesn't manage an admission into the you-know-it's-lucky college she had pinned all her hopes on. 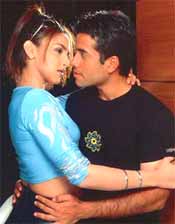 The dumb guy that he is, Rahul has to cheat his way through his exams. He acts dumber and confesses his sin, but the college principal mistakenly thinks that he has proven what an honest guy he is, and is overwhelmed by the honesty of all Indian students at large.

This fetches Esha her oh-so-longed-for admission, and the very next moment she is all over Rahul. Thus begin the grossly physical interludes between Rahul and Esha, first under the garb of "friendship", and then progressively under "love". 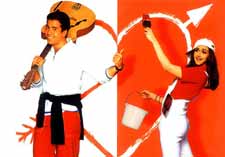 The two families are promptly summoned to legalize all their mucking about. Unexpectedly, the families reach accordance sooner than what takes the mother of all ammas Jaya to switch a stance. But before you can feel relieved that it's all drawn for a close, you get to the bizarrely insane 'twist' of the story.

After being giving sufficient time to recuperate from the startling revelation by Rahul that he doesn't want to marry Esha in the angelic form of an intermission, you go on to see Rahul declared to be a son wronged by his parents. The imprints left by his ever-bickering parents on his unsullied conscious set a mind block against marriage. And after an array of unabashedly idiotic filmi situations and the customary leaving-the-city thingy, Rahul and Esha became a part of the world's oldest institution. So much for that. 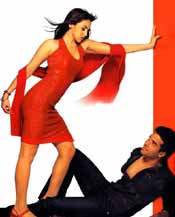 We needn't get into the technical details of the making of the film for the staggeringly straightforward reason that none exist. We probably need to talk about the new entrants Tusshar (at least relatively) and Esha, since nothing much has been told about them as yet. Thankfully, nothing much needs to be told about them either, other than the fact that their capacity to emote would fit in a mini-sized match box - with all the matches intact.

I've been told that this was a much-awaited and much-hyped kinda movie, but however much bullish you'd have been about this flick (before its release, that is), I bet you just can't bear this one.
Share. Save. Connect.
Tweet
KYA DIL NE KAHAA SNAPSHOT
See Kya Dil Ne Kahaa full details
KYA DIL NE KAHAA USER REVIEWS
1 - 12 OF 12 COMMENTS
POSITIVE  |  NEGATIVE |  NEWEST  |  OLDEST  |  MOST HELPFUL  |  LEAST HELPFUL
USER RATING
6.5
11 USERS
Performances
Script
Music/Soundtrack
Visuals
NA
NA
NA
NA
Can watch again - NA
Good for kids - NA
Good for dates - NA
Wait for OTT - NA
V. Manohar on 15th Mar 2012, 9:46am | Permalink
Kya Dil Ne Kahaa (2002) is one of the classic and evergreen movie of all times of Super Star Rajesh Khanna.
Raj on 3rd Jul 2002, 3:55pm | Permalink
upto the ticket
RATING
8
Waajid on 3rd Jul 2002, 3:51pm | Permalink
mast movie.
RATING
10
Swati on 3rd Jul 2002, 3:50pm | Permalink
tushaar looks cute
RATING
10
Akaash Kumar on 3rd Jul 2002, 3:47pm | Permalink
nice movie with a lot of refreshment.
RATING
10
Syed Rafiullah on 2nd Jul 2002, 12:47am | Permalink
movie is very good specially songs and dance
RATING
10
Crimson Feather on 1st Jul 2002, 12:57pm | Permalink
Mr. Pankaj, Yu shud try to curb ur natural instincts. Luks like U dont even know how to show ur writing "talents" incase U have any.
I think the movie is nothing but a bunch of bullshit. I can't understand why ppl. make such stupid movies...can't understand one more thing...how can ppl. give such high rating to sucha crap. U may be a born-gr8 or may be U achieved gr8ness or may be it was thrust upon U but one thing is for sure...the movie was a few kilos of horsecrap thrust upon ur face!
Mr. Reddy, I know UR answer for UR question...U don't know acting!
Jesus save ur souls.
"smirks n growls in disgust"

RATING
2
Kranti Kiran A on 1st Jul 2002, 12:31pm | Permalink
Though the movie was pathetic, kudos for the director who played the song "Bachke Rehna" at the titles. It was a statutory warning u c. He adviced ppl to get out and nobody did. Its ur prob, not his, right??
RATING
2
Aravind Prasad on 1st Jul 2002, 12:18pm | Permalink
Hey KNKK! You have to put some negative ratings... You simply cant force me to crush my conscience, scruples, ethics, etc. and give this film a single star. This is the first movie on which I ditched Amit to his fate and walked out half way. Someone commented in the "reader's comments" that Amit doesnot know about acting... Thats quite alright... atleast he doesnt act like Tusshar and Esha. It was over(re)action all the way and the movie seems to try and press, impress and what not that "aaj kal ke ladke ladkiyaan bahoot nakra karte miyaan!". In the entire movie the only thing that these two "idiots" do is nakras...

I cant believe that Hyderabadis can actually rate this movie a 3 or a 5... I really didnt know till now that the Erragadda Mental Asylum provided its inmates internet facility.

One question to KNKK. What have you got against Amit??? The sad thing is most of the time we end up with him when he goes to review movies... booohooohooo

ADVERTISEMENT
This page was tagged for
story of kya dil ke kaha
Kya Dil Ne Kahaa hindi movie
Kya Dil Ne Kahaa reviews
release date
Esha Deol, Tusshar Kapoor
Follow @fullhyderabad
Follow fullhyd.com on
About Hyderabad
The Hyderabad Community
Improve fullhyd.com
More
Our Other Local Guides
Our other sites
© Copyright 1999-2009 LRR Technologies (Hyderabad), Pvt Ltd. All rights reserved. fullhyd, fullhyderabad, Welcome To The Neighbourhood are trademarks of LRR Technologies (Hyderabad) Pvt Ltd. The textual, graphic, audio and audiovisual material in this site is protected by copyright law. You may not copy, distribute, or use this material except as necessary for your personal, non-commercial use. Any trademarks are the properties of their respective owners. More on Hyderabad, India. Jobs in Hyderabad.