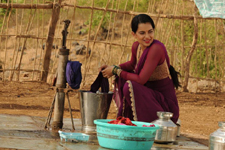 Nupur Barua / fullhyd.com
EDITOR RATING
3.0
Performances
Script
Music/Soundtrack
Visuals
5.0
3.0
3.0
6.0
Suggestions
Can watch again
No
Good for kids
No
Good for dates
No
Wait to rent it
Yes
The oldest profession in the world has always been a favourite subject for filmmakers since the inception of cinema. So when a renowned author and IAS officer decides to debut as a director with a film based on the life of a prostitute, you may want to sit up and take notice. Research will be flawless, you think, and the subject itself will be handled with maturity and with sensitivity. Well, think again, because Vishwas Patil definitely disappoints with Rajjo.

Rajjo (Kangna Ranaut) is a mujra dancer in one of the numerous brothels of Grant Road, Mumbai. She was sold to the owners of this particular house by her sister, who wanted to buy an apartment in a posh locality with the money.

Rajjo worships the famous dancer Janki Devi (Jaya Prada). Rajjo is no pushover, and is known as much for her razor sharp tongue, as she is for her talent in classical dancing.

Chandu (Paras Arora) is barely out of his teens. When he leads his cricket team to victory, his coach decides to treat the boys to a night out at Grant Road. Chandu manages to watch Rajjo's dance, and, given his love of music, he falls in love with her.

The brothel is run by the eunuch named Begum (Mahesh Manjrekar), and she surprisingly allows Rajjo to marry the young boy, who is at least half a decade younger.

The newly-married couple are shunned by Chandu's parents, and they move around the city looking for a place to stay. After one night at the coach's garage, they shift to a nearby village, where Rajjo gets a job as a dance teacher at a school run by an NGO. However, one of her old clients, Hande Bhau (Prakash Raj), is determined to make her the attraction of his proposed dance bar, and he becomes menacingly persistent about it.

The events in the movie occur randomly, and the characters are alarmingly inconsistent. The story is reminiscent of many movies from the 1980s and the 1990s, in which a wife is considered acceptable only when she takes on the persona of a traditional (read: regressively repressed) Indian woman. The feisty Rajjo all but disappears after the wedding, to be replaced by a whimpering woman with whom today's audience may not empathise.

Chandu's desperation for a job that will establish him as the man of the house, and his subsequent indignation, are surprising ??" is the director saying that just because the boy belongs to a "good" family, he should get a job without any qualification?

Also, Hande Bhau's obsession with Rajjo is most unconvincing, and you get the distinct impression that this larger scenario was created just to introduce a few redundant sub-plots (mostly those that deal with land acquisition).

The screenplay reeks of immaturity, and thus are the potential emotional scenes destroyed by an absolute lack of finesse in direction. The dialogues, mostly disconnected from the situations, seem to be picked from various Bollywood masala films of 30 years ago. Most of the situations in the plot are illogically resolved, and seem unreal. The romance is feeble, too.

Kangna Ranaut looks bored, period. She tries to instill some enthusiasm in her dancing, but even that falls flat. This lack of spunk has more to do with her lack of interest in the film than with her obvious talent.

Paras Arora is lost, mostly because he is actually a teenager who has to enact a 21-year-old. He looks straight out of school. There is no chemistry between the lead actors.

Sanjay Manjrekar tries his best to emulate a eunuch, but he falters when he takes inspiration from his roles in previous movies ??" in all of which he played a man. Prakash Raj is mind-numbing and tiresome as the villain, although he gets the most humorous lines in the movie.

The makers of the film apparently spent an amount of 5 crore rupees to recreate the ambience of Grant Road in a set. Unfortunately, it still looks like a set.

The cinematography tries hard to capture reality, but since it is missing, there seems to be no point. A pity, really, because cinematographer Binod Pradhan is one of the best in the industry.

The costume design is confusing. Kangna Ranaut wears plenty of neck-plunging, backless clothes and her make-up is perfect, even when she is working in her backyard, or in the fields. Prakash Raj asks her, in genuine bafflement, "Itni laal lipstick lagake iss jungle mein kya ghoom rahin hain?" and that one line represents the lack of logic present in the movie.

The music by Uttam Singh, who won awards for Dil Toh Pagal Hain and Gadar: Ek Prem Katha, is sub-standard, to say the least. And at more than two hours, the editing is shoddy.

Rajjo could have been a touching tale of a woman who becomes an object because of her beauty, instead of being appreciated for her talent as an artiste. The intentions of the makers seem to have been waylaid somewhere after the first 10 minutes, making it one of the dreariest, most avoidable movies this year. Skip, definitely, unless you want to pay a considerable amount of money just to doze off in a theatre. Watching the movie with your eyes and other senses open is a challenge, and a struggle.
Share. Save. Connect.
Tweet
RAJJO SNAPSHOT 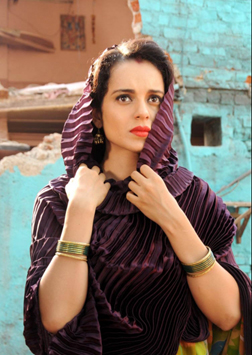 ADVERTISEMENT
This page was tagged for
rajjo devi without cloth
Rajjo hindi movie
Rajjo reviews
release date
Kangna Ranaut, Paras Arora
Follow @fullhyderabad
Follow fullhyd.com on
About Hyderabad
The Hyderabad Community
Improve fullhyd.com
More
Our Other Local Guides
Our other sites
© Copyright 1999-2009 LRR Technologies (Hyderabad), Pvt Ltd. All rights reserved. fullhyd, fullhyderabad, Welcome To The Neighbourhood are trademarks of LRR Technologies (Hyderabad) Pvt Ltd. The textual, graphic, audio and audiovisual material in this site is protected by copyright law. You may not copy, distribute, or use this material except as necessary for your personal, non-commercial use. Any trademarks are the properties of their respective owners. More on Hyderabad, India. Jobs in Hyderabad.