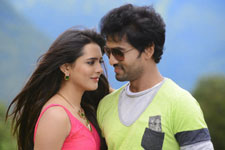 Ravi Kandala / fullhyd.com
EDITOR RATING
3.0
Performances
Script
Music/Soundtrack
Visuals
3.0
1.0
1.0
2.0
Suggestions
Can watch again
No
Good for kids
No
Good for dates
No
Wait for OTT
No
The last peg is always a bad idea - that is what causes the worst hangover the next morning. The last drag of a cigarette is also similar - for all the stories glorifying it, all it causes is a coughing fit. Similar is the case with that last bet. You generally end up losing all that you win and then some. And after watching Yamaleela 2, we realise that a last shot at fame is equally bad.

S V Krishna Reddy had the golden hand once. He would make wonderful family entertainers that were liked by all. He made Ali a star and gave him a movie that ran for 25 weeks in a single theatre. Then he decided to become a hero and invited his own downfall. Now, after being in oblivion forever, he returns for that one last shot at fame with a sequel to Yamaleela.

Yamaleela 2 starts with a small note from the director where he says that someone asked him what would happen if the Bhavishyavani fell into the hands of another human. This set off a thought process leading to the sequel. We are looking out for the person that asked that question - any help would be appreciated.

So Yamaleela starts with Yama (Mohan Babu) and Chitragupta (Brahmanandam) visiting the Manasarovar lake. Yama goes for a bath and stays in the water for fifteen days (?????). Chitragupta then finds our hero Krish (Satish) roaming around. He gives him the Bhavishyavani for safe-keeping while he goes under to search for Yama. By the time he emerges with Yama, Krish has opened the book, seen something shocking, and disappeared with the book, in that order.

Turns out that Krish is a clinical research oncologist who is working on a cure for Leukemia from traditional Sanjeevani herbs, and was near the Manasarovar lake after climbing the Himalayas bare-handed for these herbs. He skis back down and goes back to Hyderabad with the herbs. After working in a lab with 30 others and beakers with a steaming blue solution, he discovers the cure for cancer that he directly administers to his brother's 6-year-old daughter.

But what was the thing he saw in the book? Does he manage to cure the cancer? Do Yama and Chitragupta get their book back? If you are curious to know the answers to these questions, kill the curiosity and stay at home and watch the old Yamaleela. Because Yamaleela 2 is bad. Really bad.

The film has random characters walking in and out with absolutely no connection to the story. The leads are so bad that the first half, which runs entirely around them, is unbearable. Trust us when we tell you that the wall next to you is more expressive than Satish, and the frog in your neighbourhood has better voice modulation. The heroine competes with him, but the competition proves way too much to handle for her - she ends up showing a smidgen of emotion here and there. Mohan Babu and Brahmanandam try their best, but are saddled with terrible lines and do not manage to do much.

The technical values are terrible. The music's bad, and bringing in Nisha Kothari for a song does not add any value to the film - all it adds to is the headache. The visuals are decent in some scenes, but in most others are reminders of the director's fall from grace.

S V Krishna Reddy has clearly lost his touch - not just his Midas touch, but even the regular filmmaking touch. Yamaleela 2 has no logic, no story, terrible comedy, bad songs and terrible acting. We wish he'd just re-released the old Yamaleela on the occasion of its 20th anniversary. That would've been a much better shot at fame.
Share. Save. Connect.
Tweet
YAMALEELA 2 SNAPSHOT 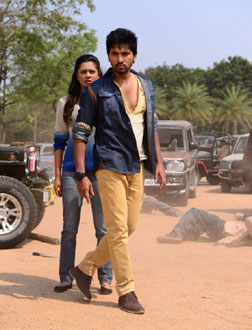 ADVERTISEMENT
This page was tagged for
Yamaleela 2 telugu movie
Yamaleela 2 reviews
release date
Dr. K V Satish, Nikita Diah Nicolas
theatres list
Follow @fullhyderabad
Follow fullhyd.com on
About Hyderabad
The Hyderabad Community
Improve fullhyd.com
More
Our Other Local Guides
Our other sites
© Copyright 1999-2009 LRR Technologies (Hyderabad), Pvt Ltd. All rights reserved. fullhyd, fullhyderabad, Welcome To The Neighbourhood are trademarks of LRR Technologies (Hyderabad) Pvt Ltd. The textual, graphic, audio and audiovisual material in this site is protected by copyright law. You may not copy, distribute, or use this material except as necessary for your personal, non-commercial use. Any trademarks are the properties of their respective owners. More on Hyderabad, India. Jobs in Hyderabad.