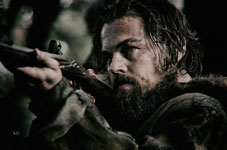 Josh / fullhyd.com
EDITOR RATING
6.0
Performances
Script
Music/Soundtrack
Visuals
8.0
5.0
6.0
9.0
Suggestions
Can watch again
No
Good for kids
No
Good for dates
No
Wait for OTT
No
It is the hunting season again. Many films out there are keenly angling for the prey - the Oscars. Which film will successfully hunt them down is yet to be seen, but we could engage in the fun game of seeing what strategies each film is adopting. Some films do it by being great cinema, and some others bait. Often the baiting is so obvious, we may as well call it the baiting season. And this year's most accomplished baiting is perhaps achieved in The Revenant.

The Revenant is simultaneously baiting for two big Oscars. The Best Film, of course, but also The Best Actor. At this point of time, Leonardo DiCaprio's Oscar has become a public issue where everybody has an opinion, whether for or against, and very few people seem to realize it is quite a pointless exercise. The Oscar is fickle prey, and DiCaprio is no victim. He is, anyway, living a life that most of us couldn't even dream of.

Getting back to the movie though, the plot is a portmanteau of a survival subplot and a revenge subplot. You're possibly aware that it is based on the true story of Hugh Glass (DiCaprio), a fur trapper and a frontiersman who got almost fatally mauled by a Grizzly bear and was thus severely incapacitated. His fur-trapping party which was escaping from a brutal attack by the native tribesmen and fleeing to the American camp leaves him in the care of Fitzgerald (Tom Hardy) and Bridger (Will Poulter) under express instructions to give him a proper burial when he dies.

Fitzgerald and Bridger abandon Glass, though, and set off to the camp themselves claiming that Glass is dead and was given a Christian funeral. Glass, however, being made of a much tougher fiber, survives, drags himself through 200 miles of wilderness, and even tracks down Fitz and Bridger to exact revenge for his abandonment.

These two paragraphs above give you an idea of what actually happened. But the abandoning doesn't seem like a good enough reason to exact revenge. At least not a noble enough reason (because you need to have nobility to wink at the Academy). So what the film does is insert a gratuitous subplot of Fitzgerald murdering off Glass' son right in front of him. So now he's surviving to avenge his son, which sounds better than sulking for being dumped by the squad.

The baiting continues. Hugh Glass (in reality) finally wouldn't exact revenge on Fitzgerald and Bridger because they re-enlist in the Army, and there are very high penalties for killing a soldier. Perfectly practical reasons. About as noble as wanting to kill the guys who left you to die. But, of course, the film can't have DiCaprio backing out for such paltry reasons. So it gives the character some more nobility of reflecting on how revenge is a contemptible companion.

This manipulation becomes very obvious and can get embarrassing. Hugh Glass is made out to be a perfect paragon of honour and integrity while Fitzgerald is utterly despicable. For a film (and a maker) that loves to appear meditative on the topic of human nature, this black-and-white approach is a glaring blunder.

Now take this manipulative mess and give it the masterly direction of Alejandro Gonzalez Innaritu, and you'll comprehend the definition of vacillation. You just can't decide what to make of the film. It is a base movie in many respects. Ordinary survival and revenge story made worse by unnecessary heavy-handedness. But... but... Alejandro Innaritu makes it look like something you've never seen before.

When the natives attack the Americans you can't help feeling like the action is happening around you. All the wizardry he demonstrated in last year's Birdman is still there, if not a tad more awesome. It is particularly evident in the scene of the Grizzly Bear attack. The attack is unnerving in terms of content itself, and then Innaritu places you at the very epicentre of all this gruesome activity. Each thump, each clutch is felt with genuine bewilderment.

The visuals are among the most impactful things you'll see in a while. A fire is shown by the flying embers against the backdrop of a dark cold night's sky. There are multiple shots from the ground of trees climbing into the sky which echo a certain emptiness in all directions. Hugh Glass often dreams up his dead wife, and there is a particularly spellbinding one with him kissing her as she hovers in the air. Innaritu is still a master, if only a misguided one.

But we can't forget the real reason why The Revenant is such a big film. The big star, of course. DiCaprio grows long hair and beard. DiCaprio survives in sub-zero temperatures. DiCaprio catches and eats raw fish. DiCaprio eats raw Bison liver. DiCaprio spent months away from hot supermodels for this role. Oh, give him an Oscar and give us a break already!

DiCaprio's may be an effortful and even masterful performance, but it isn't a great one. Just like how the film is effortfully and masterfully made but will not be remembered or even re-watched after the hype dies down. What's missing, we can't easily articulate. We can't give it a name. But we can tell you where to look for it - Tom Hardy's performance.

You take a moment and contrast DiCaprio's performance with Hardy's, and you'll get an idea of what we are going on about. Hardy probably didn't eat Bison liver or sleep in a horse's body, but he doesn't give you a chance to think of Tom Hardy when he's playing Fitzgerald. When you see DiCaprio on screen, you're already overcome by all that publicity of his strenuous efforts that you don't for a moment imagine that it is anyone else. DiCaprio can whip up some star admiration, perhaps, but he doesn't get you to worry for Hugh Glass as much as Hardy gets you to loathe Fitzgerald.

Indeed, when the star and the director are feted for all the efforts put in and all the cool things they do for a movie, that makes it a lot like celebrating a chef who wins a Guinness world record for making the largest cake ever. Painstaking? Yes. Requires craft? Yes. But shouldn't the question be, is it tasty?
Share. Save. Connect.
Tweet
THE REVENANT SNAPSHOT 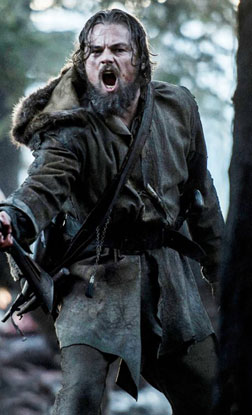 I think you are not alone in thinking that the lead actor actually does not deserve the best actor award.

Here is a link to BBC, where they have analysed the success of the movie.

http://www.bbc.com/culture/story/20160226-the-oscars-why-the-revenant-is-the-future-of-film
Josh on 2nd Mar 2016, 9:53am | Permalink
The thing is, Madhu, at some point one begins to catch on to the fact that a Best so-and-so Oscar isn't exactly given to the best so-and-so. My moment of realisation came when Inglourious Basterds didn't win the Best Original Screenplay Oscar (I personally feel that stuff can have a couple of PhD theses made on it). Or when The Shawshank Redemption didn't win the Best Film.

The trouble isn't that the good work is losing but that people covet this award so much that they start working outside their zone. I've been a fan of Innaritu right from the time I saw Amores Perros. Babel, and Birdman were both amazing, too. The complexity and sensitivity this man is capable of is marvellous.

Yet, he makes this black-and-white, hero-villain revenge story which doesn't really demand his skills. What's more, he fabricates it himself from a much different real incident. I attribute this to a want of external glory as opposed to internal satisfaction and the Oscars embody this glory.

I understand we weren't talking about Innaritu or the Oscars but I suspect you may glean a point or two from my comment which are relevant to the prevailing discussion.
Gussie FinkNottle on 28th Feb 2016, 4:40am | Permalink
You compelled me to leave a comment here with your review! really? Give him an Oscar and get it over with? He has been cheated of an award many many times so far. He might easily be the last superstar in Hollywood and a really fine actor. It seems like you reviewed Leo more than the movie!! And your rating is pathetic
Thanks for letting me get this off my chest
Brutal frankie on 29th Feb 2016, 10:49pm | Permalink
Who are you?? A real foreigner????? Leave this stupid review for stupid indians. Go and read a review of proper Americans....
Gussie FinkNottle on 1st Mar 2016, 3:40am | Permalink
And who are you?? Who appointed you as the class monitor? Everybody has a right to post and my post was addressed to the reviewer. So, cool it.
Gussie FinkNottle on 29th Feb 2016, 10:34am | Permalink
And Leo won his Oscar hhahaaha!!
Jayz on 26th Feb 2016, 9:04pm | Permalink
Dont agree with the review and the rating.Deserves an 8.Awesome performance by Leo and Hardy.Well supported by the rest.The cinematography,the costumes everything were perfect.The arctic winters were never captured so scarily in a movie.The opening fight and the grizzly attack were awesome.The emotions portrayed by Leo were so believable.He gave a great performance in the departed which should have won him an oscar but he bettered himself in this movie.He definitely deserves the oscar.It was a bit arrogant on the reviewer's part to write about giving him the oscar and get over with.He genuinely deserves this time. I saw Daniel Day Lewis in Lincoln and Leo almost reached that league in acting.Maybe the reviewer expected this one to be a silly ass movie like deadpool(which got 7)z
LEAVE A COMMENT
fullhyd.com has 700,000+ monthly visits. Tell Hyderabad what you feel about The Revenant!
MORE MOVIES
Latest Reviews
Dhaakad
Bhool Bhulaiyaa 2
Dhagad Saamba
Shekar
Jayeshbhai Jordaar
more
Sarkaru Vaari Paata
Doctor Strange In The Multiv...
Ashoka Vanamlo Arjuna Kalyan...
Runway 34
Heropanti 2
Acharya
Kanmani Rambo Khatija
Jersey (Hindi)
K.G.F. Chapter 2
Beast (Telugu)
Contemporary Reviews
Aligarh
Kalyana Vaibhogame
Jai Gangaajal
London Has Fallen
Tuntari (2016)
more
Teraa Surroor
Kapoor & Sons
Tere Bin Laden: Dead or Aliv...
Kshanam
Neerja
Krishnashtami
Malupu
Fitoor
Deadpool (2016)
Random Reviews
Darling Darling
Har Dil Jo Pyar Karega
Kabaddi Kabaddi
Donga Dongadi
Yakeen
more
Something Special
36 China Town
Resident Evil: Extinction
Gentleman
Mangala
Journey 2: The Mysterious Is...
Oz The Great And Powerful (3...
The Hitman's Bodyguard
How to Train Your Dragon The...
The Batman (Telugu)
SEARCH MOVIES
Dissatisfied with the results? Report a problem or error, or add a listing.
ADVERTISEMENT
SHOUTBOX!
{{todo.name}}
{{todo.date}}
[
ip{{todo.ip}}
]
{{ todo.summary }}... expand »
{{ todo.text }} « collapse
First  |  Prev  |   1   2  3  {{current_page-1}}  {{current_page}}  {{current_page+1}}  {{last_page-2}}  {{last_page-1}}  {{last_page}}   |  Next  |  Last
{{todos[0].name}}

ADVERTISEMENT
This page was tagged for
The Revenant english movie
The Revenant reviews
release date
Leonardo DiCaprio, Tom Hardy
theatres list
Follow @fullhyderabad
Follow fullhyd.com on
About Hyderabad
The Hyderabad Community
Improve fullhyd.com
More
Our Other Local Guides
Our other sites
© Copyright 1999-2009 LRR Technologies (Hyderabad), Pvt Ltd. All rights reserved. fullhyd, fullhyderabad, Welcome To The Neighbourhood are trademarks of LRR Technologies (Hyderabad) Pvt Ltd. The textual, graphic, audio and audiovisual material in this site is protected by copyright law. You may not copy, distribute, or use this material except as necessary for your personal, non-commercial use. Any trademarks are the properties of their respective owners. More on Hyderabad, India. Jobs in Hyderabad.