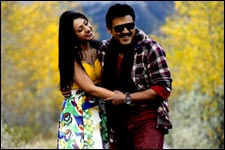 Deepa Garimella / fullhyd.com
EDITOR RATING
7.0
Performances
Script
Music/Soundtrack
Visuals
8.0
4.0
6.5
7.0
Suggestions
Can watch again
No
Good for kids
Yes
Good for dates
Yes
Wait for OTT
No
Salman Khan's sobriety in the Hindi version of this movie only emphasized the fact that Bodyguard is basically a silly story with a ridiculous ending. To elevate the film, then, beyond such a significant handicap, and turn it into a decent, palatable watch, is no mean feat. Director Gopichand Malineni must take as much credit for this as lead actors Venkatesh and Trisha must.

The Telugu Bodyguard is pretty much harmless Sankranthi fare - why, it is extremely family-safe viewing, in contrast to its A-rated competition this weekend. This is a film with the right ingredients in the right mix, despite being ridden with century-old cliches.

Venkatesh plays Venkatadri, a bodyguard hired by Peddaayana (Prakash Raj) to protect his daughter Keerthi (Trisha) in college. Keerthi doesn't want Venky around, so she plays a prank on him, calling him on his phone as a secret admirer, so that he will be distracted enough to leave her alone.

Keerthi falls into her own trap unwittingly, and falls in love with Venky. This is a premise that had potential to be cute and mushy. Actually, the romance in Bodyguard has a quality, of being mature, that goes beyond the superficial song-and-dance routines.

For example, Venky keeps spouting these soulful lines about genuine love and about how he's in love with the secret caller even though he has never seen her. However, the writers manage to shred things apart with exasperating twists that keep leaving Venky disappointed. The ending is not just melodramatic - it is also quite pointless.

Thankfully, there's some good comedy all around. Venkatesh clowns around quite a bit, and Venu Madhav and Ali are quite hilarious in separate tracks. The sequences in the college are what make up most of the movie, and have been well-made.

Also, fortunately for the film, Venkatesh is in good form. The fights, comedy and dances are right on beat, and it is his personal charm that makes so many of the movie's scenes frothy and fun. Trisha, meanwhile, has to be lauded for fleshing out a character as half-baked as this, and for turning Keethi into someone you actually root for and feel sorry for.

Prakash Raj and Kota Srinivasa Rao (who, by the way, got a few whistles when he first made his appearance in the film) make for worthy opponents of each other. Saloni looks eager throughout the movie, but her role is as corny as it gets.

And in the comedy section, as we mentioned, Ali and Venu Madhav do not disappoint. Neither does Jayaprakash Reddy, who plays the college principal.

The minty-fresh visuals aid the movie experience. The songs, especially, are well-shot. Thaman's music can hardly be termed art, but serves its purpose of framing the two good-looking people on screen prancing in gorgeous locales.

In all, you could watch it once for some mindless fun. And remember to wear your brains back on after it's done with.
Share. Save. Connect.
Tweet
BODYGUARD (TELUGU) SNAPSHOT

even mahesh used a very bad word with kajal

i guess that review is a piad one lol

ADVERTISEMENT
This page was tagged for
Bodyguard (Telugu) telugu movie
Bodyguard (Telugu) reviews
release date
Venkatesh, Trisha
theatres list
Follow @fullhyderabad
Follow fullhyd.com on
About Hyderabad
The Hyderabad Community
Improve fullhyd.com
More
Our Other Local Guides
Our other sites
© Copyright 1999-2009 LRR Technologies (Hyderabad), Pvt Ltd. All rights reserved. fullhyd, fullhyderabad, Welcome To The Neighbourhood are trademarks of LRR Technologies (Hyderabad) Pvt Ltd. The textual, graphic, audio and audiovisual material in this site is protected by copyright law. You may not copy, distribute, or use this material except as necessary for your personal, non-commercial use. Any trademarks are the properties of their respective owners. More on Hyderabad, India. Jobs in Hyderabad.