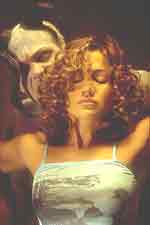 Amit Alampally / fullhyd.com
EDITOR RATING
7.0
Performances
Script
Music/Soundtrack
Visuals
NA
NA
NA
NA
Suggestions
Can watch again
NA
Good for kids
NA
Good for dates
NA
Wait to rent it
NA
The Cell has Jennifer Lopez as a psycho-analo-therapist. Yeah, right - and I am the fifth Beatle. Wonder what in the world prompted this casting. Last time around she at least got to flaunt all the fancy stuff they made out of the humungous cobra they lynched in "The Anaconda". She went on a "high" and imagined that she perched atop the Beverly Hills.

Well, we'll do the only thing we can under the circumstances - forget that J Lo is in the movie and get on with it. In an abandoned rural farmhouse, Carl Stargher (Vincent D'Onofrio) locks innocent female victims in a large glass cell where he drowns them through an automated process and videotapes it. Now you know he is demented - if all he wanted to watch was buxom beauties yell and scream in disbelief in exactly the same pattern, he just could have gotten himself the Miss Universe contest tapes right from the 19th century. That would've been safer, too - for this gets the FBI gets on his tail.

Now a violent seizure renders him comatose, and the FBI only manages to capture his unconscious body. Unfortunately, he has already prepared the cell with his latest victim.

Because of her empathetic personality, scientists choose Catherine Dean (okay, do I have to say who it is?) to infiltrate the mind of Carl and discover the location of his latest victim. Not only is Carl's mind disturbingly violent and sexual, it is also very graphic. Several psychedelic landscapes in the insides of Carl's brain, some quick "in-and-out" affairs and a customary "twist" later, the film ends on a good note.

The Cell is a love/hate movie - either you love it or you hate it. Despite being probably one of the most visually stimulating films ever made, it will be too much for many viewers - some will not understand the story that combines serial killers with mind-probing, some will not understand the complex emotions of the film, and the rest will not understand why they're watching J Lo doing all this. Yet, it's one of those engrossing films that convey more through metaphoric symbolism than through dialogues or dance numbers. And as this coalesces with the horrifically scathing soundtrack, the film literally takes on a life of its own.

The flick is an array of visuals and sounds, blended together so well that you feel like you're experiencing a dream... but quite unlike the one in "What Dreams May Come". And that is not the only movie (that I can think of) that inspired the director, Tarsem Singh, either. The film also appears to be a graft of "The Silence Of The Lambs" on to "The Matrix".

The bottom line: A must watch, but before that, stuff J Lo in "The Cell" and throw the keys away.
Share. Save. Connect.
Tweet
THE CELL SNAPSHOT

See The Cell full details
THE CELL USER REVIEWS
1 - 15 OF 15 COMMENTS
POSITIVE  |  NEGATIVE |  NEWEST  |  OLDEST  |  MOST HELPFUL  |  LEAST HELPFUL
USER RATING
4.1
46 USERS
Performances
Script
Music/Soundtrack
Visuals
NA
NA
NA
NA
Can watch again - NA
Good for kids - NA
Good for dates - NA
Wait to rent it - NA
K.o Aiyer on 25th Jan 2002, 7:02pm | Permalink
i am shocked to see the ratings for the movie. this movie totally SUCKS. hey fullhyd, its high time u put some sense into ur reviews.
RATING
2
The King on 25th Jan 2002, 2:12pm | Permalink
Good Movie. Very good Review.
RATING
8
Forgot My Name on 25th Jan 2002, 2:09pm | Permalink
Full marks to the author. Has put the movie in words in brief.
RATING
6
The LEO on 25th Jan 2002, 1:44pm | Permalink
Yeah, I completely agree with author, review befits the movie (and of course, Jennifer!!)
RATING
8
Tampee on 25th Jan 2002, 1:28pm | Permalink
shitty movie, shittier review. write properly -adn clearly.
RATING
2
Praveen C on 25th Jan 2002, 12:38pm | Permalink
i just read review of the cell...i d seen the movie looong time back....when it was released in the states...gotta say its a really weird movie....but the cinematography is excellent...some of the gory scenes are a bit too much...but i guess that captures the exact mindset of a psycho killer...n i have to say that writer does seem to have a penchant for writin n that had made a good job out of it
RATING
6
The Editor on 25th Jan 2002, 11:05am | Permalink
Dear Howdoesitmatter,
This is our view: a review should tell you about the film - the story, the entertainment value and the overall quality. Which, in our opinion, this review does (that is the reason that it got past our proofreaders). It narrates the story to the extent appropriate, and it talks about the technical aspects, the cast, the direction, the positive and negative points of the film, and whether, in our view, the film is likely to appeal to you.
We always welcome feedback and it is interesting to know why others think we are right or wrong, but a statement as brief as this is inadequate in helping us understand what exactly the reason for your dissonance is. If you were to elaborate on the deficiencies in our stand, it would help us in improving and in avoiding the same mistakes the next time.
Also, if you leave your email address, it will help us in taking feedback on a regular basis.
RATING
6
Howdoesitmatter Howdoesitmatter on 25th Jan 2002, 2:21am | Permalink
folks ive done the work for y all i ve seen the movie and read the review...cant really say which one sux bigger time...its time u have ratings for the reviews also...
RATING
2
Joon Chatterjee on 24th Jan 2002, 9:48pm | Permalink
I also the share the same feelings regarding the movie. Its well stated by the writer, Amit Alampally, in a pretty humorous and catchy style. Keep up the good work.
RATING
4
Thappé Tapori on 24th Jan 2002, 3:41pm | Permalink
Excellent review - and decent flick, too.
RATING
6
Tappu Tapori on 24th Jan 2002, 1:13pm | Permalink
abah! fuuhyd reviews are beginning to look like deccan chronilce's reviews. really bad review.
RATING
2
Kamikaze Pilot on 24th Jan 2002, 11:44am | Permalink
hey amit u could do without those bottom line of yours. it sucks.
RATING
4
Avis Avis on 24th Jan 2002, 11:35am | Permalink
correction .. the previous review shud read as follows ..
the movie sucks.. and u wud do well to avoid it.. unless u are insanely in luv with J Lo.. (to the point of being suicidal )
RATING
2
Avis Avis on 24th Jan 2002, 11:33am | Permalink
ive seen this movie.. u wud do good doing the same unless u are insanely in luv with JLo ..( to the extent of being suicidal )
RATING
2
Pure Rubbish on 23rd Jan 2002, 11:27pm | Permalink
whats a review ???????????great...well i hated the movie like i hate a lizard..
RATING
4
LEAVE A COMMENT
fullhyd.com has 700,000+ monthly visits. Tell Hyderabad what you feel about The Cell!
MORE MOVIES
Latest Reviews
The 355
83
83 - Telugu
Shyam Singha Roy
The Matrix Resurrections - H...
more
The Matrix Resurrections
Pushpa: The Rise - Hindi
Pushpa: The Rise
Spider-Man: No Way Home
Spider-Man: No Way Home - Hi...
Spider-Man: No Way Home - Te...
Chandigarh Kare Aashiqui
Akhanda
Satyameva Jayate 2
Ghostbusters: Afterlife
Contemporary Reviews
Dr. Dolittle 2
In Too Deep
Sliver
Crossroads
Khaakhi Chokka
more
Ansh
Jack No 1 (Rumble In The Bro...
Moodu Simhaalu
Har Dil Jo Pyar Karega
Deevinchandi
Tomb Raider (Telugu)
Yaadein
Pearl Harbor (Hindi)
Chitram
Random Reviews
Aanandam
Muskaan
Itlu Sravani Subrahmanyam
Kitha Kithalu
Fanaa
more
Hello (Hindi)
Kasko
Black Swan
SMS
Mahankali
Mandela: Long Walk To Freedo...
Night At The Museum: Secret ...
The Jungle Book
Raju Gari Gadhi 2
The Curse Of The Weeping Wom...
SEARCH MOVIES
Dissatisfied with the results? Report a problem or error, or add a listing.
ADVERTISEMENT
SHOUTBOX!
{{todo.name}}
{{todo.date}}
[
ip{{todo.ip}}
]
{{ todo.summary }}... expand »
{{ todo.text }} « collapse
First  |  Prev  |   1   2  3  {{current_page-1}}  {{current_page}}  {{current_page+1}}  {{last_page-2}}  {{last_page-1}}  {{last_page}}   |  Next  |  Last
{{todos[0].name}}

ADVERTISEMENT
This page was tagged for
The Cell english movie
The Cell reviews
release date
Jennifer Lopez, Vincent D'Onofrio
theatres list
Follow @fullhyderabad
Follow fullhyd.com on
About Hyderabad
The Hyderabad Community
Improve fullhyd.com
More
Our Other Local Guides
Our other sites
© Copyright 1999-2009 LRR Technologies (Hyderabad), Pvt Ltd. All rights reserved. fullhyd, fullhyderabad, Welcome To The Neighbourhood are trademarks of LRR Technologies (Hyderabad) Pvt Ltd. The textual, graphic, audio and audiovisual material in this site is protected by copyright law. You may not copy, distribute, or use this material except as necessary for your personal, non-commercial use. Any trademarks are the properties of their respective owners. More on Hyderabad, India. Jobs in Hyderabad.