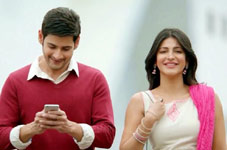 Ravi Kandala / fullhyd.com
EDITOR RATING
7.0
Performances
Script
Music/Soundtrack
Visuals
7.0
5.0
7.0
7.0
Suggestions
Can watch again
No
Good for kids
No
Good for dates
Yes
Wait for OTT
No
Imagine having a good meal. You are happy and your taste buds are tingling in anticipation of the dessert. You see a beautifully decorated cheesecake come your way. The slight dusting of cocoa ups your anticipation and the delicate tangy smell of lemon wafts to you making your mouth water. And then you try to cut into it and find it hard. You still think it'll taste okay. You bite into it and you realise it is stale. There goes the entire experience of your meal.

Srimanthudu is somewhat like that. It starts off well enough. We are introduced to an heir apparent Harsha (Mahesh Babu) who's not really interested in his billions, and his dad Ravikanth (Jagapathi Babu) who does not really understand his son's world. In comes Charuseela (Sruthi Hassan), a girl pursuing a rural development course in NIRD, Hyderabad. Harsha meets Charu and tells her that he loves the course she's doing, and joins her college.

The two get close but when Charu finds out who Harsha is, she distances him telling him that he does not even know his roots and she's a rooted girl and that their worlds will not collide. This statement leads Harsha to discover his roots in a village called Devarakota. How Harsha adopts the village of Devarakota and rids it of the ills plaguing it forms the plot of Srimanthudu.

So the appetizer, the first half, is nice. The first song, Harsha's and Charu's meetcutes, and Mahesh's acting - all of these make for a good takeoff. There are nicely composed fights and the thrills flow organically. The main course, most of the second half, works well. There are no punch dialogues or fights for the sake of fights. The comedy and Sruthi Hassan spice things up well enough, and you begin to relax thinking your meal is well set. A mass song comes in like slightly sour curd, and you still don't mind. And then the pre-climax / climax sets in, and goes about ruining everything that worked well so far. Sigh.

Director Koratala Siva does a good job with most of the film. He makes sure the script is adhered to, pulls off good masala moments without heavy dialogues or counters, and paces the narrative well - while the film does proceed in a leisurely fashion, at no point does Srimanthudu have you feeling bored. Mahesh supports his director ably and puts in a splendid performance. He also pulls off the rich guy look effortlessly with elegant and understated costumes and styling. The sighing of the women in the theatre was audible every time he made an appearance.

Sruthi Hassan does her usual thing, and the rest of the supporting cast do a decent job, too. Sampath and Mukesh Rishi are way too typecast - it is getting boring watching them do these "I'm so badass" villain characters that get beaten to pulp in the climax.

Technically, Srimathudu is impressive. The songs are so much better on screen, and the background score elevates several core moments. The art director could've really gone easy on the bling, though - rich does not necessarily mean gaudy. The dialogues are sharp and not punchlines, which is a relief.

Srimanthudu is a good ride all the way until the final cricket match that Mahesh plays with a rod and the heads of a dozen goons. It is good to see Mahesh give first place to the story, and try and make a strong comeback after the tripe that was Aagadu. Go watch this one - it's been a while since the script was the hero in a big-budget film.
Share. Save. Connect.
Tweet
SRIMANTHUDU SNAPSHOT 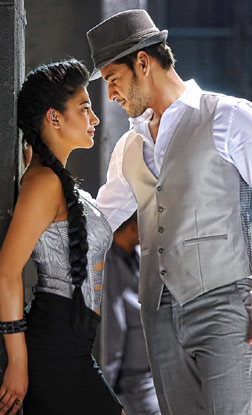 See Srimanthudu full details
TOP COMMENT
Venu Madhav on 7th Aug 2015, 8:29pm | Permalink
Rating given to Script: 5
Quote (last statement) from review:
"Go watch this one - it's been a while since the script was the hero in a big-budget film."

enti baasu idi? Clean movie after a long time, must watch for the entire family with kids. Next generation of kids won't even know some of the issues mentioned in this movie.
10
1
SRIMANTHUDU USER REVIEWS
1 - 6 OF 6 COMMENTS
POSITIVE  |  NEGATIVE |  NEWEST  |  OLDEST  |  MOST HELPFUL  |  LEAST HELPFUL
USER RATING
6.4
5 USERS
Performances
Script
Music/Soundtrack
Visuals
NA
NA
NA
NA
Can watch again - NA
Good for kids - NA
Good for dates - NA
Wait for OTT - NA
Sujana on 11th Aug 2015, 11:31am | Permalink
Dear Ravi Kandala, I use fullhyd as a source of reviews to make a decision to watch a movie or not. And it has been a reliable source so far. Not any more, not your reviews any way. How could you recommend watching this movie? What is entertaining about it? The vulgarity of the wealth, the number of fights and the brutalness of those? The really insidious idea that one good-hearted rich man can change India which doesn't consider how the rich men get so in the first place?
Venu Madhav on 7th Aug 2015, 8:29pm | Permalink
Rating given to Script: 5
Quote (last statement) from review:
"Go watch this one - it's been a while since the script was the hero in a big-budget film."

ADVERTISEMENT
This page was tagged for
srimanthudu fully hyderabad review
Srimanthudu telugu movie
Srimanthudu reviews
release date
Mahesh Babu, Shruthi Hassan
Follow @fullhyderabad
Follow fullhyd.com on
About Hyderabad
The Hyderabad Community
Improve fullhyd.com
More
Our Other Local Guides
Our other sites
© Copyright 1999-2009 LRR Technologies (Hyderabad), Pvt Ltd. All rights reserved. fullhyd, fullhyderabad, Welcome To The Neighbourhood are trademarks of LRR Technologies (Hyderabad) Pvt Ltd. The textual, graphic, audio and audiovisual material in this site is protected by copyright law. You may not copy, distribute, or use this material except as necessary for your personal, non-commercial use. Any trademarks are the properties of their respective owners. More on Hyderabad, India. Jobs in Hyderabad.