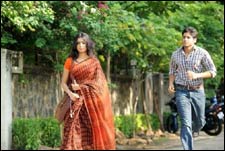 Deepa Garimella / fullhyd.com
EDITOR RATING
6.0
Performances
Script
Music/Soundtrack
Visuals
6.5
6.0
8.0
9.0
Suggestions
Can watch again
No
Good for kids
Yes
Good for dates
Yes
Wait for OTT
Yes
The promos suggest an Archies-like romance, and you're probably picturing lots of fluff floating around. Surprisingly, it's not fluff you'll find in Ye Maya Chesave - there's something satiny about this detail-rich movie. Like a rich creamy chocolate shake, it takes its own saccharine time to slide down your throat ever so gently.

Gautham Menon's key triumph in the production is the finesse in direction. It is sheer indulgence for the audience to watch every frame, every dialogue and every expression delivered with the meticulousness of someone trying to set a table using fine crystal ware.

It's a different matter that the script is not a "story" - it is not really a collection of events or vignettes as much as it is a portrayal of a couple's courtship. That's a polite way of saying nothing much happens in the flick.

Karthik (Naga Chaitanya), an aspiring filmmaker, falls in love with his landlord's daughter Jessie (Samantha) at first sight, and clumsily goes about vying for her attention, and even proposing to her too soon. The amused Jessie is soft about her refusal to get into this, mostly because her father won't let her, a Kerala Christian, marry a Hindu. The rest of the story is about what happens to the rest of the romance.

Ye Maya Chesave is qualified to be called a mature love story, because it is high on realism. The characters are all flesh and blood, and their lines and confrontations are solidly rooted in reality. The problem, however, lies in its pace and in its casting. There are long spells of emptiness in the film, cushioned either by a song or by whispered dialogues that lose you because they're rather bland.

It leads to the mismatch between the kind of flick this is and the lead pair - neither the hero nor the heroine really exudes the romantic flavour that this movie is made up of. Couple that with the fact that the entire film is fixated on primarily two characters, without a healthy social buffer - joking families or gangs of friends, for example - and things get claustrophobic at times.

For Naga Chaitanya, this movie is undoubtedly a plum platform to build up on his acting skills. His earnestness is visible, but his dialogue delivery remains a lot less than perfect. The heroine Samantha is talented, and she might bag some good offers after this one, though.

Krishnudu plays himself - bizarrely, in the role of the hero's sidekick - and he's pleasant to have around. There are other Tollywood plugins, too - Puri Jagannadh is in this as well. A lot of unfamiliar faces are part of the cast, and do well.

The film moves between Hyderabad and Kerala. Menon mounts his story on some astonishing cinematography, pampering the eye not with the lush tea gardens or backwaters of Kerala, but with the beauty of human expression and interaction. The sets and the actors are styled with rarely seen urban polish, and yet everything seems approachable - the heroine wears cotton chudidhar-kurtas and sarees, and the hero's dressed like an average well-dressed college student.

Rahman's music is a major asset to the flick. His compositions are, well, mathematical harmony.

In all, Ye Maya Chesave is a well-crafted movie, but could have been much more fun were there more to its plot and cast.
Share. Save. Connect.
Tweet
YE MAYA CHESAVE SNAPSHOT

RATING
9
bujji on 12th Apr 2010, 11:57pm | Permalink
Movie is ok. No story line ......but good screenplay. I think its not for kids. Miss Deepa garimella didn't watch it carefully ( there are somany lip to lip kisses in that great telugu version). So i suggest don't allow kids to the theatre......... just gone with nice cinematography n background score. Rehman did good job in backgroud, not in the songs.....coz i couldn't get the clarity in lyrics which were written by ananth sriram........may be telugu people don't need them hahahhaha. its so funny. Anyways we can watch it once. All the best for Goutham ( a hired director from malayalam). And i wish in future, telugu directors also look forward making such movies.

MusicNeverDies on 11th Apr 2010, 9:55am | Permalink
This is for the first time i have been writing a review for the movie and there were a lot of movies that talk about LOVE factor. I liked some, disliked some, but I never felt any movie like this ever before!!!!

The movie is for the urban class and the performance by Nag, is not well and needs to fine tune his acting skills from his DAD. And for the icing on the cake is Jessie alias "Samantha" the girl next door. Thanks to the custume designer and deserves pat on the back. The locations are superb and go well with the selected audience.

Not to mention the songs and the music score does not need any critics. A job well done by one and all in this segment.

ARR and Menon Sir have done telugu industry proud with this movie....a breezy movie that can be watched as many times as possible :)

ross on 1st Apr 2010, 3:58pm | Permalink
It is one of the finest love stories in the telugu film indutry after so far. I 'm really mad about it. The way of narrating is awesome.
Finally well done by chai & sam, Chemistry of both are really worked.
But chai has to improve his dancing skills.


Pros: all parameters
Cons: nothing

Prashanth on 18th Mar 2010, 6:43pm | Permalink
I saw this movie in both Tamil and Telugu version, wonderful performance by Gautham, Simbu, AR Rehman, Samantha Ruth & Naga Chaitanya. I am sure those who are in love will surely like this movie, background music is too good. The park scene and the following song, Jessy reveals that she is also in love and the following song, Karthik proposes her 2nd time in Kerala and few more scenes are amazingly good with the background music and I am sure that those who doesn't like these scenes will be a human without emotions.....the story ends good in Telugu than in Tamil.....


Pros: Direction, Music & Acting
Cons:
RATING
10
Krishna on 17th Mar 2010, 9:33am | Permalink
Something in Telugu cinema that we aren't used to seeing - a realistic urban love story. The plot is realistic and all but the pace is a real killer; especially the 2nd half which is a total drag. Full marks for the cinematography and background score. Overall the music is fine but its ARR's background score that goes for gold. It's simply awesome.


Pros: Actors, Songs, Story, Direction
Cons:
RATING
10
rayudu on 11th Mar 2010, 11:37pm | Permalink
one of the best love stories in the telugu film industry. Lets say it as a feel naturla movie. heroine acting is amazing and naga chatanya has done very good. all the other departments are excellent


Pros: everything
Cons: bit slow
Swatty on 9th Mar 2010, 12:27pm | Permalink
Nonthing so grandular to rave about. Same decades old formula present in telugu, tamil movies but may be presented in a likeable way. People may get cheated by the screenplay and Jr. Nagarjuna's (naga)'s perfomance but there's nothing to rave much cos it's such a simple love story all it requires is the hero to be himself. I watched both telugu and tamil version i would say both the heroes did well may be simbhu scored a little bit more while emoting but samantha was way ahead of trisha in acting dept. ALl in all it could be a watch-one-time movie but definitely not a trend setter or classic by any means. A typical Goutham menon film for you and please dont overrate his works and compare him with other legends


Pros: samantha and of course ARR
Cons: Weak plot, Bad picturisation of songs
Sidharth on 3rd Mar 2010, 12:34am | Permalink
Watched "Em maya chesave" movie today. I found the movie to be very well directed, in place and script perfectly in control. When you come out of a few movies you feel good - and I felt that with this movie. Though it was initially difficult for me to digest Naga chaitanya as it was his first movie for me, as the movie came to a finish, he impressed me with his acting skills - especially the last 20 min. I did not watch JOSH, his first movie, because of his phobia. After watching this movie I have decided to get the josh CD and watch it.

On the other hand the lady lead was an absolute treat to watch on screen. Her acting skills and the way she carried herself onscreen was very matured for her first movie. Though a non telugu speaking girl she did very well with the lip sync, where even seasoned non-telugu speaking actresses failed miserably. She looked gorgeous with her minimum makeup and sensible dressing - add to it her absolute cocaine heroine scotch filled voice dubbed by Chinmayi Sripada. Just listening to her voice makes you drenched in nasha. Tough I like 70% of the woman I see, she would definitely fall in the top 10%. I would say she is a dream girl of every man. The girl samantha is a going to be a big big plus to this movie.

The story is very well thought and sticks to its core message. The story basically tries to convey the real problems faced by the young men/women which is basically a sort of confusion and restrictive yes/no kind of predicaments. Situations which people fall in every now and then in todays cosmopolitan society with not so cosmopolitan parents. The chemistry is great between the two. Even tough there were kiss scenes, they looked as if they were part of the movie and sometimes may be even necessary to give that sensual touch to a very young couple.

The love story was at paar with the previous love stories directed by gautam menon in Gharshana and Surya s/o krishna. Very matured and "in control" love stories. Dialogues and script are also simple and sensible. Overall I give a thumps up to this movie.


Pros: samanta, music, locations
Cons: slow paced
RATING
7
Anil Teja Isukapally on 28th Feb 2010, 11:55am | Permalink
One of the finest movies ever made in Telugu Film History...music and background score are very soothing...Chaitu has improved a lot and delivered his best...way to go....finally Samantha...she is really awesome man...can't escape from her magic...kudos to Gowtham Menon...never seen such a tremendous way handling a sensible story....many directors should learn a lot in how to show a heroine as an angel in sarees....


Pros: Samantha, Chaitu, Rehman
Cons: None
charan on 27th Feb 2010, 5:58am | Permalink
This is a classic movie after a long long time.
Anyone, who doesn't like this has no feelings.

People who hate love and its sensible moments will not like this movie.


Pros: Chiatu, Samantha, narration
Cons: nothing
aAKASA rAMANNA on 26th Feb 2010, 10:55pm | Permalink
I would like to say that i saw this movie and am writing this review ... but seriously it doesnt feel like ive seen a movie ... It was that slow but to its credit was kinda breezy though
The script shouldve been way better .. Gautam menon does take his time to get us involved with the characters but the performances do not give us the desired effect for such a movie .
The songs are ... well awrite .. But the background music absolutely rocks .. A love story relies heavily on the feel of the scene and it is given perfectly by the cinematography and the background music .. Only wish the movie had more to tell .
Btw Spot on Miss Garimella ... Saw this movie so that i could folllow ur review