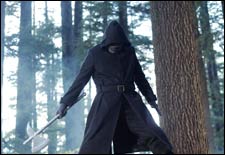 Deepa Garimella / fullhyd.com
EDITOR RATING
2.0
Performances
Script
Music/Soundtrack
Visuals
3.0
2.0
4.0
4.0
Suggestions
Can watch again
No
Good for kids
No
Good for dates
No
Wait to rent it
No
You can pun and pun about how Kulu Manali is a murder mystery that "murders" not-so-mysteriously, but that still doesn't begin to describe its after-effects. This thriller had a lot of things on its agenda - intriguing you, creating work for lesser-known actors, and making Vimala Raman kick a** - but this is one film even the makers know is a disaster.

The film first eases us into the company of a bunch of friends (Krishnudu, Shashank, Chanti, etc.) who, with their lame conversation, land in Kulu Manali for a vacation. The 3 girls in the group, by the way, can only be distinguished from one another by the length of their clothing. A stranger Aparna (Archana Veda) hitchhikes and joins them in their plans.

They all somehow end up staying at an empty bungalow, in a godforsaken place that has no transport and no cell phone towers. In their midst is a tour guide (Harshavardhan), a mute housekeeper, and a lecherous driver.

Now a mysterious killer is on the loose, killing these friends one by one. What does this murderer have against these people? Will the police woman (Vimala Raman) help crack the case? Who is this murderer? Is it the sleepy acting? Is it the botched dialogues?

Kulu Manali suffers from incompetence in most departments. The plot could have been worked into a decent story, but loopholes, bad dialogues and unconvincing revelations shed it of any credibility. In all, this seems to be a rather amateur attempt.

At least 3 times in the story, characters tell one another, "Mundu manam ikkadanunchi bayita padaali." And yet, everyone is hanging around in the bungalow - even after 3 murders - simply because there is no mode of transport and the writers have absolutely no creative solution on offer.

The weak performances bring down the quality of the movie further. Vimala Raman has a poorly-etched role. Archana Veda has none to speak of. And the other girls have no presence whatsoever. In general, the women seem to be pretty comfortable dressed in shorts and sleeveless shirts in Kulu Manali.

The men are upcoming actors, who need good direction if they are to make any impact. Remarkably, comedian Chanti is the only person in the cast who elicits any sort of emotion from the audience, many of whom he successfully tickles. Harshavardhan needed better lines.

The visuals are low on appeal, and this seems to be a film made in a hurry. The songs are no good either - even Usha Uthup's Race-inspired number.

In short, this is a film that must necessarily be ignored, even when on TV.
Share. Save. Connect.
Tweet
KULU MANALI SNAPSHOT

ADVERTISEMENT
This page was tagged for
kulumanali movie wikipedia
kulumanali movie
manali telugu movie wiki
Information on kulu manali in telugu
Kulu Manali telugu movie
Follow @fullhyderabad
Follow fullhyd.com on
About Hyderabad
The Hyderabad Community
Improve fullhyd.com
More
Our Other Local Guides
Our other sites
© Copyright 1999-2009 LRR Technologies (Hyderabad), Pvt Ltd. All rights reserved. fullhyd, fullhyderabad, Welcome To The Neighbourhood are trademarks of LRR Technologies (Hyderabad) Pvt Ltd. The textual, graphic, audio and audiovisual material in this site is protected by copyright law. You may not copy, distribute, or use this material except as necessary for your personal, non-commercial use. Any trademarks are the properties of their respective owners. More on Hyderabad, India. Jobs in Hyderabad.