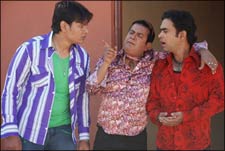 Deepa Garimella / fullhyd.com
EDITOR RATING
5.5
Performances
Script
Music/Soundtrack
Visuals
6.5
4.0
6.5
6.5
Suggestions
Can watch again
Yes
Good for kids
Yes
Good for dates
Yes
Wait to rent it
Yes
The gang is back. Well, partly, at least. And things seem to be looking up. For one, the visuals don't look like your uncle's first shot at home videos. There's an attempt at a conventional "hero introduction" scene. The jokes don't center around the repeated usage of "baig*n" any more. It's a relief - a little like watching the "Kaju Shek" cart seller correct his spelling finally.

This time, the fuss is over a haveli that is occupied by a motley bunch of families who won't vacate the place despite their landlord's creative means of getting them to go. The landlord now hires a goon Gauri (Adnan Sajid) to do the needful.

Ghauri and his sidekicks shift into the haveli, where they must deal with the gutsy tenants, as well as with another set of loser goons led by Tabar. Mishaps, romantic mix-ups and sentimental drama colour the journey, before an ending that suits everyone (and that surprises no one).

The story and the "twists" are extremely basic. The two sets of thugs keep trying to put the other down, and their methods are as dumb as a truckload of bricks. There's a scene in which Tabar and his men sneak up on Ghauri's gang to pull off a firecracker prank.

When the plot is not pandering to the intelligence of your pre-school nephew, Adnan Sajid manages to keep things funny and lively. In fact, both the lead actors are talented, and their quick comic timing makes them an asset. Adnan is multi-talented - he's a good singer as well - and he must do more films in general. Some other fun parts of the film include the dhoban and the flower-seller sequence.

The dialogues are otherwise extremely amateurish, especially the emotional ones that the heroine, and her friends and family keep spouting. Some of the scenes, are, in fact, the stuff of really bad television. They are coupled with rookie performances, mostly by the women.

Ja Bhai Jaa is a huge improvement on the cinematography front, thanks finally to its makers' attempt at bringing a contemporary look to the film. There's also some jazzy background music in place.

If you're used to this brand of movies, you'll gulp down Ja Bhai Jaa this season anyway. The rest should strictly stick to plan A.
Share. Save. Connect.
Tweet
JA BHAI JAA SNAPSHOT

ADVERTISEMENT
This page was tagged for
Ja Bhai jaa movie story
ja bhai ja hyderabadi moves
Ja Bhai Jaa hindi movie
Ja Bhai Jaa reviews
release date
Follow @fullhyderabad
Follow fullhyd.com on
About Hyderabad
The Hyderabad Community
Improve fullhyd.com
More
Our Other Local Guides
Our other sites
© Copyright 1999-2009 LRR Technologies (Hyderabad), Pvt Ltd. All rights reserved. fullhyd, fullhyderabad, Welcome To The Neighbourhood are trademarks of LRR Technologies (Hyderabad) Pvt Ltd. The textual, graphic, audio and audiovisual material in this site is protected by copyright law. You may not copy, distribute, or use this material except as necessary for your personal, non-commercial use. Any trademarks are the properties of their respective owners. More on Hyderabad, India. Jobs in Hyderabad.