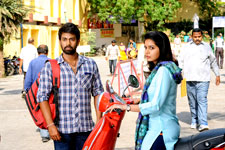 T J Reddy / fullhyd.com
EDITOR RATING
4.0
Performances
Script
Music/Soundtrack
Visuals
5.0
5.0
2.0
3.0
Suggestions
Can watch again
No
Good for kids
Yes
Good for dates
No
Wait to rent it
Yes
You know why The Rock is the highest paid actor in the world? You know why studios offer millions to cast him in their awful movies? You know why you and I will watch the Jumanji movie even though we know it's going to be bad? It's not because he's a great actor or doles out genre-defining performances. It's because of all the oodles of charm he brings. The Rock saved the The Fast And The Furious and G I Joe franchises from obscurity, and now has movies about 8-bit video games getting greenlit relying solely on his star power.

The cold hard fact is, a great script is nothing without a good head behind the camera and a good face in front of it that can charm the audience into parting with their money. The director and star of London Baabulu, a remake of Tamil critical and commercial darling Aandavan Kattalai, suffer from a Vitamin C deficiency, where C stands for charisma.

London Baabulu's story is a reflection of the modern Indian lower-middle and lower classes. With the allure of earning in dollars/pounds/euros and spending in rupees at an all-time high, many a young man and woman are ready to embrace a half-chance at going abroad opting for not-so-legal channels to achieve said goals. Two such young men are Gandhi (Rakshith) and Pandu (Satya) from Antarvedi.

Faced with your everyday movie problems which involve poverty and repaying loans, the duo make their way to Hyderabad in hopes of procuring passports and visas which will aid them in making it to London. However, things are not as simple as they seem - for Gandhi in particular, as his behaviour and mindset align with those of his famous namesake. Soon, he gets himself unwittingly caught in a rigmarole that involves fake passports, fake wives (Suryakantam played by Swati Reddy), even fake-r divorce hearings, and some very real implications.

London Baabulu had plenty of plot beats to mine for an engaging screenplay, and a proven story and relevant social message at its disposal, but director Chinni Krishna and lead actor Rakshit unite to form the perfect concoction of bland to squander it all away. The movie visually illustrates the chasm in quality between an experienced director-actor combo and a duo of newbies.

Rakshit, a novice, is still an actor in the rough. He has flashes of skill that dissipate quicker than his character's dreams of going abroad, owing to some poor and unimaginative direction. The adeptness experienced actors Jeeva, Swathi, Ali, Satya, Murali Sharma and Dhanraj (an excellent turn by him) have with their craft keeps the film from being wholly unwatchable.

Unlike the original, which had subtle clues about the film's many messages hidden in newspaper stories and TVs in the background all enveloped by a camera that played God, London Baabulu joins a long line of films that think dropping a blatant message with no attention paid to detail, look or feel suffices for a good outing at the cinemas. An almost shot-for-shot remake is a film school student's thesis assignment - this wide-release feature film can't get even that right.

Nowhere is this more pronounced than with composer K's songs and score. The man whose music that so beautifully and idiosyncractically held the original together leaves this in tatters.

We as audiences agree that every film should be evaluated on its own merits. But when those merits are at a premium, like an ant hunting for sugar, my brain scurried on to the sweet taste of good cinema. I've chewed on sugar and I've chewed on neem, and I prefer sugar every time. Now someone get me a visa out of this cinema hall so that I can go get some of that sweetness.
Share. Save. Connect.
Tweet
LONDON BABULU SNAPSHOT 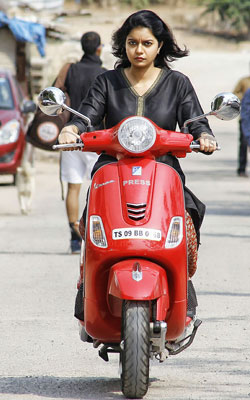 See London Babulu full details
LONDON BABULU USER REVIEWS
1 - 1 OF 1 COMMENTS
POSITIVE  |  NEGATIVE |  NEWEST  |  OLDEST  |  MOST HELPFUL  |  LEAST HELPFUL
Hari on 23rd Nov 2017, 2:13am | Permalink
I watched Aandavan Kattalai(with subs). It had a lot going for it. Vijay is a seasoned and versatile actor is tailor made for such roles. Loved Ritika in that role too. I was skeptikal the moment this movie was announced. I hate remakes and who is Rakshit? Never heard of him. And director Chinni Krishna should stop his directorial ambitions. He was mildly funny as an actor and should probably stick to that.
Good review TJ. Could sense your frustration :)

ADVERTISEMENT
This page was tagged for
London Babulu telugu movie
London Babulu reviews
release date
Rakshith Gowda, Satya
theatres list
Follow @fullhyderabad
Follow fullhyd.com on
About Hyderabad
The Hyderabad Community
Improve fullhyd.com
More
Our Other Local Guides
Our other sites
© Copyright 1999-2009 LRR Technologies (Hyderabad), Pvt Ltd. All rights reserved. fullhyd, fullhyderabad, Welcome To The Neighbourhood are trademarks of LRR Technologies (Hyderabad) Pvt Ltd. The textual, graphic, audio and audiovisual material in this site is protected by copyright law. You may not copy, distribute, or use this material except as necessary for your personal, non-commercial use. Any trademarks are the properties of their respective owners. More on Hyderabad, India. Jobs in Hyderabad.