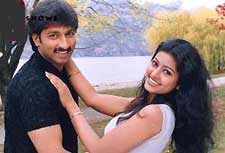 Ajay Bhashyam / fullhyd.com
EDITOR RATING
5.0
Performances
Script
Music/Soundtrack
Visuals
NA
NA
NA
NA
Suggestions
Can watch again
NA
Good for kids
NA
Good for dates
NA
Wait to rent it
NA
Imagine trying to put a particularly energetic child to sleep - you start telling a story with a particular theme, but the kid just doesn't fall asleep, and so though the story should end, you keep taking it further into areas you didn't think of initially. That is somewhat how Tolivalapu goes - it appears like the director is just trying to drag a film that's started off from a novel base.

Prem (Gopichand) lives with his friends in the city. His dream is to own a bike, and with some help from his rural agriculturist father (L B Sriram), he does get it. However, on the first night itself it gets punctured, and because there is no mechanic around so late, Prem decides to park it in a nearby house for the night. The door is opened by a very pretty girl Soumya (Sneha), and the smitten and dumbstruck Prem manages to explain his predicament and leaves the bike and keys.

The next morning when he goes to pick up the bike, he doesn't find it, and the girl and her father (Chandramohan) completely deny any knowledge. Our man understandably gets riled and creates a ruckus, but to no avail. The story progresses and a thief is caught who admits to having burgled the house in question that night. But the father continues to stoutly deny any such happening. This obviously creates some confusion, and then the burglar reveals that he also raped the daughter. Think things become clearer? Think again!

There has to be a villain somewhere - enter wicked son-in-law Kailash (Ravishankar), husband of the elder daughter. A total MCP, he is still harping on the money he was supposed to receive from the marriage. He keeps doing all he can achieve this aim of his, even going to the extent of ruining Soumya's marriage by telling the boy's family that she was raped. He even proposes to marry her and have children, all for the property, of course.

While he's bad-mouthing her, Prem, who is still very much in love with Soumya, steps in and offers to marry her. They get married, and any normal film would've quietly ended here. But this one goes on and on. There are songs and pregnancies and a whole lot of trials and tribulations, all because Soumya says she was raped. But that isn't what has actually happened.

There is the inevitable comedy track involving Sudhakar, Ali, Sriram and others, which is funny in snatches. The dialogues and dialogue delivery (especially by Ravishankar, playing the son-in-law) are good. The music is passable. Debutant Gopichand is okay, though he looks very camera conscious. Sneha is cute - people who think that body beautiful and bodacious curves maketh not a heroine, look at Urmila and think again!

ADVERTISEMENT
This page was tagged for
tholi valapu songs
Tholi Valapu telugu movie
Tholi Valapu reviews
release date
Gopichand, Sneha
Follow @fullhyderabad
Follow fullhyd.com on
About Hyderabad
The Hyderabad Community
Improve fullhyd.com
More
Our Other Local Guides
Our other sites
© Copyright 1999-2009 LRR Technologies (Hyderabad), Pvt Ltd. All rights reserved. fullhyd, fullhyderabad, Welcome To The Neighbourhood are trademarks of LRR Technologies (Hyderabad) Pvt Ltd. The textual, graphic, audio and audiovisual material in this site is protected by copyright law. You may not copy, distribute, or use this material except as necessary for your personal, non-commercial use. Any trademarks are the properties of their respective owners. More on Hyderabad, India. Jobs in Hyderabad.