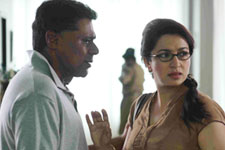 Nupur Barua / fullhyd.com
EDITOR RATING
6.0
Performances
Script
Music/Soundtrack
Visuals
7.0
5.0
6.0
7.0
Suggestions
Can watch again
Yes
Good for kids
No
Good for dates
Yes
Wait to rent it
No
Trivia - Nupur and Rajesh Talwar, parents of the deceased teenager Arushi, tried their best to ask for a stay on the release of Rahasya. According to them, the story portrays incidents that resemble, too closely, the events in their controversial lives after their daughter's murder. Director Manish Gupta denied then that Rahasya is a retelling of the famous murder case, and continues to maintain it. However, it is clear where the inspiration comes from.

Ayesha Mahajan (Sakshi Sem) is a teenager who lives in Mumbai with her parents, both doctors. And she is dead. Discovered by the maid (Ashwini Saleskar), the corpse is taken in for autopsy. Every piece of evidence on the body points to her father, Sachin (Ashish Vidyarthi). He is the prime suspect now, but the cops continue their investigation even as they look for a motive.

And they discover that Sachin is not the only one whose life will become more convenient with the disappearance of Ayesha. The list of suspects grows, with everybody seeming to have a secret, including the deceased - you have to figure out the intentions of every person connected to Ayesha, directly or indirectly. And that is the unenviable job that CBI top cop Sunil Paraskar (Kay Kay Menon) has.

Sachin pleads his innocence, of course. Paraskar may or may not believe him, but he has to look into every little clue that he finds, and investigate every single aspect of the case, before he can definitely declare the doctor the murderer. Sachin's wife Aarti (Tisca Chopra) is distraught, and not averse to suspecting her husband. As relationships strain and things get murkier, Paraskar realises that everything is not black and white. Worse, Ayesha may not have been such an innocent teenager herself.

The story is engaging, to say the least. Given its similarities with the Arushi Talwar case, parallels are inevitable. However, the movie has its own identity, and a gripping screenplay ensures that. As with most murder mysteries, red herrings are mandatory, and so is the gradual uncovering of secrets, slowly and steadily.

Rahasya is not a comfortable film, and the characters reflect the society that we pretend to ignore. As Paraskar points out to Sachin, he is not what he seems. This holds true for all the people involved in the case. The structure of the screenplay is reminiscent of an Agatha Christie book, and equally engrossing.

The characters add to the plot, and each intrigue is as exciting as the next. The script evolves from a simple murder case to a study of various psychologies. It is up to Paraskar to read between the lines and beneath the veils of polite society.

Where the movie disappoints is in the last 15 minutes or so, in which the climax is stretched beyond reason. A murder mystery is all about quick impact, especially when the murderer is revealed, but the writer puts in too many explanations. Also, besides the red herrings, there are some unnecessary twists in the tale that seem convoluted.

Despite these flaws, the dialogues are effective, the action is realistic, the emotions are unforced, and the thrill is maintained at a steady pace. It is a well-executed tight screenplay, and keeps you guessing, which is what a good murder mystery should do.

Kay Kay Menon is in his element in Rahasya. This is clearly the kind of role he enjoys portraying. He is bth safe and scary, and slightly unpredictable. Tisca Chopra is the most underused actor in the film, and that may be because her character was not fleshed out quite so well. Meeta Vasisht is suitably vampish and a victim of circumstances simultaneously. Ashish Vidyarthi, for a change, is the scene-stealer. He portrays vulnerability and cunning with such conviction that you forget that Sachin is a fictional character.

The setting, along with the cinematography, is understated and sophisticated. Both remain in the background, never distracting you from the content, and never disturbing your sensibilities. Real locations only add to the grittiness of the movie. Ditto for the costumes. The background score by Ranjit Barot is suitably haunting, and a perfect accompaniment to the events that unfold on screen. The editing is crisp, allowing the story a certain pace, but rarely pulling it down.

Murder mysteries can never go out of fashion, because we are a voyeuristic race that loves to watch and psychoanalyse the misery of others. Rahasya is a movie that is relatable, and not only because of its eerie similarities to the Arushi Talwar case. It is definitely worth one watch, and will undoubtedly lead to a few days, or weeks, of retrospective debates, which is what a decent movie should be able to achieve after its screening.
Share. Save. Connect.
Tweet
RAHASYA (2015) SNAPSHOT 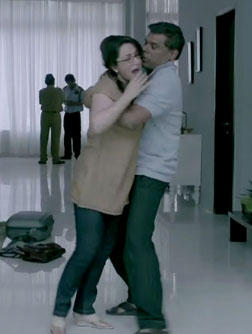 ADVERTISEMENT
This page was tagged for
rahasya 2015 full movie
Rahasya (2015) hindi movie
Rahasya (2015) reviews
release date
Tisca Chopra, Ashish Vidyarthi
Follow @fullhyderabad
Follow fullhyd.com on
About Hyderabad
The Hyderabad Community
Improve fullhyd.com
More
Our Other Local Guides
Our other sites
© Copyright 1999-2009 LRR Technologies (Hyderabad), Pvt Ltd. All rights reserved. fullhyd, fullhyderabad, Welcome To The Neighbourhood are trademarks of LRR Technologies (Hyderabad) Pvt Ltd. The textual, graphic, audio and audiovisual material in this site is protected by copyright law. You may not copy, distribute, or use this material except as necessary for your personal, non-commercial use. Any trademarks are the properties of their respective owners. More on Hyderabad, India. Jobs in Hyderabad.