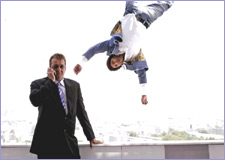 Najaf Ishrati / fullhyd.com
EDITOR RATING
5.0
Performances
Script
Music/Soundtrack
Visuals
NA
NA
NA
NA
Suggestions
Can watch again
NA
Good for kids
NA
Good for dates
NA
Wait for OTT
NA
Amitabh Bachchan. That is what the name Anthony Gonzalves will always be remembered as, long after the reels of Anthony Koun Hai join Amar, Akbar, Anthony on the shelves. Yes, yes, that’s quite all right, but who is this Anthony of Anthony Kaun Hai? Hmm, that’s funny… I don’t seem to remember. Was it a blackmailing journalist now?

Well, yes, I’m pretty sure that’s who Anthony Gonzalves is. Or rather, was. However, before you hit back with a hate campaign for ruining the suspense, let me just get one word in. It’s not important. And yes, Arshad Warsi took his dig at pretending to be Anthony, too. But no, you can still save the brickbats, for even that’s not important.

Although the movie contains the hit pair of Sanjay Dutt and Arshad Warsi, if you’re expecting the jugalbandi you saw in Munnaibhai, then by eggs and by bacon, you’re sadly mistaken. Every minute of the movie, some thick plot is unfolding. Sanjay Dutt is underused, and Arshad Warsi ends up covering the ruse. As good an actor that Warsi is, it is here that it becomes apparent that he can’t take the weight of an entire film squarely on his own shoulders.

The ruse itself is so long and elaborate, it almost doesn’t fit in the movie itself. There are movies where the story will fit into one small sentence - like, man lost memory, man found love, man found memory, love lost man. However, this movie has none of that. Come to think of it, you could call it the Indian version of the 1001 Arabian nights. Only minus Sindbad and Ali Baba and his 40 thieves. No, the movie would have got too unwieldy with all that. Definitely unwieldy.

Champ (Arshad Warsi) is telling his story to stay alive. After having admitted (in half a syllable) to Master Mohan (Sanjay Dutt) that he is Anthony Gonsalves, he spends the rest of the time (eight tenths of the movie) trying to explain that he is not actually Anthony Gonsalves.

The movie blesses the assassin Master with the speaking skills of Arnold Schwarzeneggar, the fighting skills of Keanu Reaves and the shooting skills of Clint Eastwood. This cocktail of a character is hired by the villains to kill Anthony Gonzalves, who is traced to a room in a hotel.

Trying to save his life (in the minute and a half that he is allotted by Master) Champ flashes back 15 years when magician Raghuveer (Raghubir Yadav) uses his powers to steal diamonds from some princess-looking lady. Accompanied by his small daughter, he buries these diamonds in the ground in front of a small temple in the forest. While trying to sell one of them, he gets caught and is sent to jail.

We flash forward to some more Schwarzeneggar-styled one-liners with Master, and then flash back to see our Champ running round trees trying to woo Roza (Anusha Dandekar). Self-employed as a counterfeiter, Champ finds himself arrested and lands up in the same jail as Raghuveer.

Champ is released, but not before Raghuveer offers him half the diamonds in exchange for arranging for an escape. Champ effects the escape, and meets Raghuveer’s daughter, Jiya (Minissha Lamba). But to his luck (and ours), he lands up with the ID of a murdered blackmailer, Anthony Gonzalves.

The villains want to kill the newly resurrected Anthony, and send Master after some failed attempts. In between these plots, you’ll find some good performances by an Interpol officer Suraj Singh (Gulshan Grover) who just can’t sing. Also in between, you have some Kabutar Ja Ja Ja type sequences where love letters are exchanged and the diamonds (which find themselves inside a prison compound) are salvaged.

Arshad Warsi excels as an actor, and looks the part while proposing to his first love: “Oye bhen di takki, shaadi kerti kya?” However, the story becomes too plot-heavy, and soon begins to require intense concentration power and a lot of memory. Sanjay Dutt once again plays the type of role that the audience has come to love of him, but the common grouse of all the movie-goers is that his role is majorly limited to that of a flashback listener. There just isn’t enough of him in the film.

Minissha Lamba has an awkward role to play… she has to deal with the romance from Champ, in the aftermath of Raghuveer’s death. In the end, she just about manages to hang on. Grover is excellent with his constant discordant singing.

The film is worth half a watch... that is, if you can cut out the boring story and the thickening plot, and enjoy the half with all the characters and the dialogues. In the end, if you do decide to go to the hall and watch it, be sure to take a notepad along.
Share. Save. Connect.
Tweet
ANTHONY KAUN HAI? SNAPSHOT

ADVERTISEMENT
This page was tagged for
Anthony Kaun Hai? hindi movie
Anthony Kaun Hai? reviews
release date
Sanjay Dutt, Arshad Warsi
theatres list
Follow @fullhyderabad
Follow fullhyd.com on
About Hyderabad
The Hyderabad Community
Improve fullhyd.com
More
Our Other Local Guides
Our other sites
© Copyright 1999-2009 LRR Technologies (Hyderabad), Pvt Ltd. All rights reserved. fullhyd, fullhyderabad, Welcome To The Neighbourhood are trademarks of LRR Technologies (Hyderabad) Pvt Ltd. The textual, graphic, audio and audiovisual material in this site is protected by copyright law. You may not copy, distribute, or use this material except as necessary for your personal, non-commercial use. Any trademarks are the properties of their respective owners. More on Hyderabad, India. Jobs in Hyderabad.