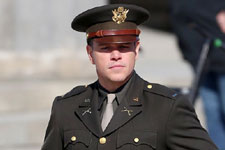 Deepa Garimella / fullhyd.com
EDITOR RATING
6.0
Performances
Script
Music/Soundtrack
Visuals
8.0
6.0
7.0
7.0
Suggestions
Can watch again
No
Good for kids
Yes
Good for dates
Yes
Wait for OTT
Yes
"We all die. The goal isn't to live forever, the goal is to create something that will." - Chuck Palahnuik

Stories of war-mongers destroying precious cultural symbols of the conquered are commonplace in history. In the age of the Internet and Antilla, it is hard enough to make authorities understand the sheer neglect that so many of our glorious relics face, without having to imagine how much more was lost to hatred and violence. The Monuments Men, loosely based on a real-life account talks about a band of men who set out to protect a culture from these very jaws of death - the ravages of war.

Imagine you're a museum curator or an art professor doing your own arsty-fartsy thing one fine afternoon, and you're suddenly drafted for a World War mission that is doomed to fail. This is what happens when Frank Stokes (George Clooney) decides he wants to save art works from the destruction of World War II. He rounds up a team of unlikely soldiers - art collectors, museum curators, art historians, professors and even artists - to embark on this seemingly laughable mission.

The Monuments Men, as they are called, go to Europe to guide combat officers on how to avoid destroying places of culture in their attacks. They also search for artworks that have been stolen or stashed away by the Nazis (some of it for Hitler's planned museum, the Führermuseum, and return them to their rightful owners.

They encounter an art curator Claire Simone (Cate Blanchett), a Frenchwoman fiercely passionate and patriotic about art. Claire is especially embittered because she is forced to look the other way when Nazi officers steal priceless works.

When James Granger (Matt Damon) seeks out Claire's help to find out where the stolen pieces are, she is extremely sceptical about his intentions, suspecting that the Americans want them to fill their own museums. And Claire isn't the only one getting in the way of their quest.

Understandably enough, their own army men are unwilling to change their battle/attack strategies just to protect a monument or a sculpture (this was one of the things Stokes' bosses back home in the USA had already envisioned).

However, the men, who have now split up into different teams to look for the treasures, eventually stumble upon rather jaw-dropping collections of artworks hoarded away in sealed mines. Hundreds, or maybe even thousands, of Impressionist paintings and statues, and gold, are some of their discoveries.

This is a story with an honourable message - you may fight a war and kill scores of people, but if you don't preserve their creations, their culture, and their hard work, it's like they never existed. Although the film is set in the War, the tone is that of a mellow drama-comedy, with a hint of a thriller. There's no violence or sinister-ness; just a bunch of semi-witty situations. There's an attempt to make it sound like a treasure hunt, as the men go look for "clues" in the pursuit of the next prize.

However, the movie is slow-paced, and abstract. While all the men are very emotional and evangelical about protecting art, and some of it does trickle to you, you still don't get the full import of what these guys are feeling. This is perhaps because you don't completely connect with what they are trying to save.

At places, the screenplay is slightly confusing. The conversations are short, and yes, there is some dialogue-based humour, but there are times when you don't know how a particular scene led to where it is.

The actors all do a commendable job. None of them has anything exceptional to do, but Matt Damon probably makes the best impression with his portrayal of Granger and his clumsy French. George Cate Blanchett is quite effective as the tight-lipped Claire, although her character could have let her hair down a bit.

The sets are nice reproductions of war-time Europe, although none of it overwhelms you. The background music is a series of cheerful, uplifting tracks that set a rather airy mood to the plot.

Overall, The Monuments Men has an interesting premise, but it doesn't get very intriguing. Watch it if you don't mind slow-moving plots.
Share. Save. Connect.
Tweet
THE MONUMENTS MEN SNAPSHOT 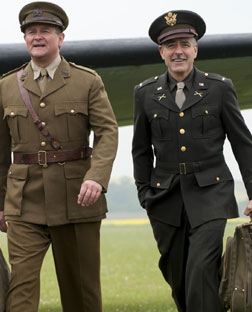 ADVERTISEMENT
This page was tagged for
The Monuments Men english movie
The Monuments Men reviews
release date
George Clooney, Matt Damon
theatres list
Follow @fullhyderabad
Follow fullhyd.com on
About Hyderabad
The Hyderabad Community
Improve fullhyd.com
More
Our Other Local Guides
Our other sites
© Copyright 1999-2009 LRR Technologies (Hyderabad), Pvt Ltd. All rights reserved. fullhyd, fullhyderabad, Welcome To The Neighbourhood are trademarks of LRR Technologies (Hyderabad) Pvt Ltd. The textual, graphic, audio and audiovisual material in this site is protected by copyright law. You may not copy, distribute, or use this material except as necessary for your personal, non-commercial use. Any trademarks are the properties of their respective owners. More on Hyderabad, India. Jobs in Hyderabad.