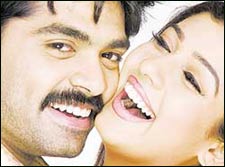 EDITOR RATING
5.0
Performances
Script
Music/Soundtrack
Visuals
NA
NA
NA
NA
Suggestions
Can watch again
NA
Good for kids
NA
Good for dates
NA
Wait for OTT
NA
What should you do if you fall in love with a woman who is 3 years elder to you? This is the main question that Vallabha asks. It doesn’t answer it – that would be taking things too far. Simbu instead sticks to the two things he can do best – write a meaningless script, and kiss Nayantara. If any of those two reasons is compelling enough for you to watch the film, this one is for you.

A dubbed version of the Tamil Diwali release Vallavan, Vallabha is the story of a man who shines in the world of Simbu’s logic. Vallabha (Simbu) is a student who hangs around with a best friend Suchi (Sandhya) and a bunch of other slack-jawed yokels who think he’s the center of the universe even if he’s their own classmate – both concepts that you find only in the movies.

Like all self-respecting movie college heroes, Vallabha is waiting for that one woman who will sweep him off his feet. It happens with Swapna (Nayantara), who is unfortunately his lecturer. She is also older than him, bigger than him, and much easier to look at.

Realizing perhaps that she will never find him good-looking, Vallabha disguises himself as a much worse looker to court her. The ostensible reason is that she should like him for his heart and not his looks. The real reason is that Simbu has no business writing movie scripts or directing them.

Since this is just a movie, Vallabha’s approach works, and Swapna flips for his undying love. Things only get better when she discovers that Vallabha is no frog, but a prince (or at least somewhere in between the two), and they quickly start doing all the things you saw them doing in the promos and on the posters. Vallabha even sleeps with her, shortly after which she realizes that he is a student in her own college, and 3 years younger. She dumps him for lying to her, and promptly gets engaged to someone else, breaking his heart.

The film now moves into a flashback showing Vallabha’s school days where he and Ganga (Reema Sen), a quasi-psychotic co-ed, are in love, but how she is domineering and eventually loses him. This part is the most watchable in Vallabha for its portrayal of school days and the puppy romances. Most of us miss our school days, and there is so little of school shown on screen that it is always appealing on the few occasions that it is, which makes even average movies like 10th Class work.

However, this bit looks like an ad in the middle of an episode of a serial rather than an integral part of the movie. It has just nothing to do with the film's main theme, and most of the reason for that seems to be the shoddy editing of the film that happened when it was dubbed into Telugu – the original Tamil version has Reema Sen properly integrated into the film.

What this random chopping off (done perhaps to reduce the length of the film from 185 minutes in Tamil) does is render the film completely senseless. The post-flashback bit mentions Reema plotting to end the romance between Vallabha and Swapna, but the film shows none of that, and you cannot infer anything from what you see.

And after that, the way Vallabha gets Swapna to return to him, with a speech that is pantomime with you hearing only background music and seeing only his lip movement, renders the main plot payoff – how he can get Swapna to overcome the 3 year older thing – completely left out. It's like going to a watch a match and hearing X declared the winner since Y gave a walkover, without a minute of play happening.

Simbu doesn’t have the screen presence for a romantic hero, and certainly doesn’t look built for the fights he performs – the one fight he is involved in is ridiculously choreographed for these times. He writes weird scripts, which seem to work simply since they are weird. Nayantara and Reema Sen do their job, and the film does have the glitzy look you associate with most upmarket Tamil films now.

This one is worth a watch for the school sequences of the second half, and, for those starved enough, Nayantara's uncharacteristic shedding of on-screen inhibitions. With bigger Telugu releases coming up, Vallabha might be an option just for a week or two for those who need to watch new Telugu films every week.
Share. Save. Connect.
Tweet
VALLABHA SNAPSHOT

ADVERTISEMENT
This page was tagged for
Vallabha Movie posters
Vallabha movie review
Vallabha film
Vallabha movie detals
vallabha movie plot
Follow @fullhyderabad
Follow fullhyd.com on
About Hyderabad
The Hyderabad Community
Improve fullhyd.com
More
Our Other Local Guides
Our other sites
© Copyright 1999-2009 LRR Technologies (Hyderabad), Pvt Ltd. All rights reserved. fullhyd, fullhyderabad, Welcome To The Neighbourhood are trademarks of LRR Technologies (Hyderabad) Pvt Ltd. The textual, graphic, audio and audiovisual material in this site is protected by copyright law. You may not copy, distribute, or use this material except as necessary for your personal, non-commercial use. Any trademarks are the properties of their respective owners. More on Hyderabad, India. Jobs in Hyderabad.