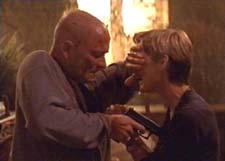 Ajay Bhashyam / fullhyd.com
EDITOR RATING
6.0
Performances
Script
Music/Soundtrack
Visuals
NA
NA
NA
NA
Suggestions
Can watch again
NA
Good for kids
NA
Good for dates
NA
Wait to rent it
NA
First things first - this is NOT 'The Mummy Returns'. It is a totally different movie on the same theme, rather shamelessly hoping to cash in on the Egyptian mummy - mystery bandwagon. And by the looks of the ticket sales, it is indeed doing that!

Since this is the sequel, you might think it would be a waste of time if you've missed the first part. Well, not entirely - though there are references to and connections with the first part, this one pretty much stands on its own.

On a Thursday, at 10:55pm, a peculiar alignment of heavenly bodies is due to occur. This prompts a series of gruesome murders in the preceding week and Detective Riley (Jason Scott Lee) is called in. Bradley is trying to contact Samantha desperately to warn her that Talos (the all-powerful mummy) will rise and come after her.

The course of his investigations brings Riley to the Egyptian museum and to Samantha, who works there. Samantha tells Riley that she, her father and Bradley were part of an expedition to Egypt, and that their discovery (whatever it was) drove Bradley to obsessive insanity. Anyway, she explains the legend of the black magician Talos (which is quite interesting) to Riley, and the murderer's identity and the reasons behind specific organs of the victims going missing become apparent.

There are plenty of twists and turns in the story, with Edith, a clairvoyant, helping Bradley and Claire, Samantha's mysterious friend, all adding to the general mêlée. The story moves to a reasonably interesting climax with an unexpected twist in the end a la Manoj Night Shyamalan.

Post mortem - the movie is more like an appetizer for its likely-to-be more popular cousin which stars Brendan Fraser and releases next week. There is this sense of expectancy throughout the film which is never really satisfied and, frankly, leaves you feeling like you were promised a bar of chocolate and given a toffee.

The thrills could've been more thrilling, and for a mummy movie, there is surprisingly little of the USP. And towards the end, the director seems to have gotten a little carried away with the look of the mummy which becomes a 12-foot cross between a man, a dog and a hoofed animal. Anyway, this is a good movie for some reasonably stimulating timepass, and oh yes, there is one small problem - the show in town is in Hindi! Don't say we didn't warn you!
Share. Save. Connect.
Tweet
MUMMY - 2 (HINDI) SNAPSHOT

ADVERTISEMENT
This page was tagged for
the mummy 3 movie in hindi
mummy 2 in hindi
the mammy 2 in hindi movie
mommy 2 move
mummy 2 movie in hindi
Follow @fullhyderabad
Follow fullhyd.com on
About Hyderabad
The Hyderabad Community
Improve fullhyd.com
More
Our Other Local Guides
Our other sites
© Copyright 1999-2009 LRR Technologies (Hyderabad), Pvt Ltd. All rights reserved. fullhyd, fullhyderabad, Welcome To The Neighbourhood are trademarks of LRR Technologies (Hyderabad) Pvt Ltd. The textual, graphic, audio and audiovisual material in this site is protected by copyright law. You may not copy, distribute, or use this material except as necessary for your personal, non-commercial use. Any trademarks are the properties of their respective owners. More on Hyderabad, India. Jobs in Hyderabad.