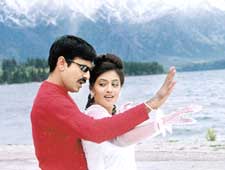 Finagle's Fourth Law: Once a job is done, anything done to improve it only makes it worse. What's more, he tries to improvise on it for the first half. The unintelligent tinkering destroys any remaining bits of sanity in the movie.

Frandick's Corollary: Left to themselves, things will go from bad to worse. Bad actors, like the debutante heroine, make things worse.

Franklin's Rule: Blessed is he who expects nothing, for he shall not be disappointed. So as audiences, we would advise you to follow Franklin's rule.

Seriously, Ee Abbayi Chaala Manchodu has such gaping holes that even whispering about the film would cause echoes. Romance, as this flick will tell you, is not just about splitting pasta at the Italian restaurant or wiping off mayonnaise from your girlfriend's lips while she's having a burger. It's also about sharing bigger agonies in life, like living a miserable life together in a small tenement and watching a movie like Ee Abbai Chaala Manchodu without blaming each other for the folly.

Ravi Teja (Vivekananda) is the manchi abbayi who doesn't mind walking all the way home after donating his Merc to a needy friend. So when this rich dude falls in love with a poor girl and Dad objects to it saying he should just sleep with her and then ditch her after the fancy wears off, Vivek's blood boils and he walks out of the house.

With no money on hand and a girlfriend to take care of, he has to start life afresh. What's more, he even has to prove to his Dad that love is not just about making love and giving in to carnal pleasures. He tells his girlfriend Swapna (Vani) that they shall lay off each other for the next five years.

To make the world believe they are not having an affair, they lie to all that they are married. Enter Jeevita (Sangeeta) as Vivek's randy boss, and the couple's peaceful existence is shattered. Swapna thinks Vivek is no more loyal to her and is having an affair with his boss. Vivek has to prove his innocence and save his love and sweetheart.

The first half of the movie trots along merrily with some easy scenes. As a precious son advising his Dad on business and love, Vivek looks charming and even believable. But after the young couple decides to pad together in a tiny tenement and live together, the movie starts getting into that contrived mode.

We are shown that the couple is leading a very austere life in a tiny tenement earning Rs. 50 a day. But then Swapna goes around sporting six strands of jasmines at any point. Since each strand of jasmine in Hyderabad cost Rs. 4 after bargaining, she wears flowers worth Rs. 25. Now that's what we call indulgence.

The most ridiculous of all roles is that of Jeevita who says she hates men because they are all perverts who touch and feel her obscenely. But all the same, when she sees Vivek and is charmed by his gentlemanly behavior, she feels randy and doesn't mind falling all over to charm him. Well, there are scores of such bloomers throughout the movie.

Towards the last one hour, the movie completely loses track and leaves us frustrated. That the director himself had no idea how to drag the movie is obvious from unnecessary insertions like the plane hijack where Vivek and Jeevita are kidnapped.

Ravi Teja shows his usual ease and compensates for the awful performances of his co-stars. Keeravani's music leaves a lot to be desired. Except for one number - Oo Saari - the rest are all the usual jhing-bang.

The most inspiring moment of the movie that evoked catcalls and whistles is a dialogue that says only men can understand men. So real men, try and make sense of this one.
Share. Save. Connect.
Tweet
EE ABBAI CHAALA MANCHODU SNAPSHOT

ADVERTISEMENT
This page was tagged for
yeah by Challa manchodu Telugu MP3
Telugu ee abbai chala manchodu mp3
Ee Abbai Chaala Manchodu telugu movie
Ee Abbai Chaala Manchodu reviews
release date
Follow @fullhyderabad
Follow fullhyd.com on
About Hyderabad
The Hyderabad Community
Improve fullhyd.com
More
Our Other Local Guides
Our other sites
© Copyright 1999-2009 LRR Technologies (Hyderabad), Pvt Ltd. All rights reserved. fullhyd, fullhyderabad, Welcome To The Neighbourhood are trademarks of LRR Technologies (Hyderabad) Pvt Ltd. The textual, graphic, audio and audiovisual material in this site is protected by copyright law. You may not copy, distribute, or use this material except as necessary for your personal, non-commercial use. Any trademarks are the properties of their respective owners. More on Hyderabad, India. Jobs in Hyderabad.