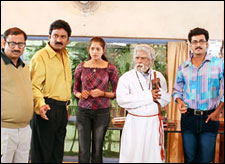 Mithun Verma / fullhyd.com
EDITOR RATING
5.0
Performances
Script
Music/Soundtrack
Visuals
NA
NA
NA
NA
Suggestions
Can watch again
NA
Good for kids
NA
Good for dates
NA
Wait to rent it
NA
Ever since the formula for Avunu Vallidaru Ishtapaddaru turned out swell, filmmakers have been trying to boil the same soup again without much success. It looks like they might've finally succeeded. They might have, but this definitely is not it. What this is, is another attempt, by Vamsi himself, to repeat his former triumph.

This time around it's Sivaji, instead of Ravi Teja, that plays the role of a wimpy dud living with comedians crawling all over his life. He's got no clams about staying in the background till all these people finish their stand-up acts. The main acts include a plot to inculcate corruption into an honest government employee, and another hilarious plot of Jeeva shuttling between his two wives. Most of the first half is managed by these.

Vamsi uses 14 full-fledged comedians, 22 random jokes, 43 wacky lines and 48 different comedic plots in all, and this is in just the first half! Okay, so we'll stop complaining already. We know he's had slow first-halves before. We're sure he'll make it up the next time around.

The actual story, if we can call it so, is that Sivaji flips for Veda the minute he sees her on the telly. They meet, but whenever that happens, things turn out in a fashion that Sivaji ends up looking like a total imbecile. Okay, so he might be one, but he shouldn't at least look like one. Every time he attempts to do something for her, it backfires miserably. So he tries harder only to fall harder.

Veda remains blissfully clueless about all of this. She at least has that clueless _expression. She's drop-dead gorgeous for sure, but that doesn't really mean she has the right to make us drop-dead with her acting skills, too. Anyway, we see her getting highly irritated with Sivaji. We see her flirting happily with a guy her dad sets-up for her, for, she only loathes Sivaji's guts.

So it is quite obvious that in the end, she only accepts Sivaji as her love. Accept him?! Wait a minute... how the hell did that happen?! We don't know how, but we do know when - in the end. Looks like she's been reading the script after all.

Another person who could've read the script was Prakash Raj. He plays the role of Veda's dad, a life insurance scamster. His elaborate character has nothing to do with the plot. Whatever connection was made was completely just for the sake.

The movie isn't a total washout, thanks to some really funny lines. Like, when Jeeva notices a group of policemen with the sniffer dogs on their strong leash, he says "paapum policulu aa kukkalni yenduku arrest chesaaro...?" (wonder why the police arrested those poor dogs...?)

The real laugh came out of something which we assume was meant to be funny. Sivaji tries to kill himself because Veda rejects his love. He jumps from the Babukhan estate. When Veda rushes to the hospital, you see him writhing in pain, blood still oozing from his many raw wounds - all two of them, covered carefully with sticky band-aids. We didn't really know he tried jumping from the first step...

ADVERTISEMENT
This page was tagged for
Konchem Touchlo Unte Cheputhanu telugu movie
Konchem Touchlo Unte Cheputhanu reviews
release date
Sivaji, Veda
theatres list
Follow @fullhyderabad
Follow fullhyd.com on
About Hyderabad
The Hyderabad Community
Improve fullhyd.com
More
Our Other Local Guides
Our other sites
© Copyright 1999-2009 LRR Technologies (Hyderabad), Pvt Ltd. All rights reserved. fullhyd, fullhyderabad, Welcome To The Neighbourhood are trademarks of LRR Technologies (Hyderabad) Pvt Ltd. The textual, graphic, audio and audiovisual material in this site is protected by copyright law. You may not copy, distribute, or use this material except as necessary for your personal, non-commercial use. Any trademarks are the properties of their respective owners. More on Hyderabad, India. Jobs in Hyderabad.