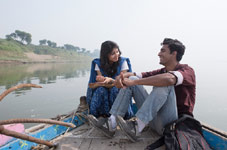 Nupur Barua / fullhyd.com
EDITOR RATING
7.0
Performances
Script
Music/Soundtrack
Visuals
7.0
8.0
7.0
7.0
Suggestions
Can watch again
Yes
Good for kids
No
Good for dates
Yes
Wait for OTT
No
We live in strange times in India. The dichotomy inherent in us, thanks to preconceived notions of acceptable culture vis-à-vis the need to keep up with the rest of the world, has made us a rather confused lot. And this is best illustrated in a place like Benaras, which is both a city and a small town (in terms of attitude), a place of learning and intolerance, and a place that is ancient and modern.

Dying in Benares will absolve you of your sins, it is believed, and it is hardly surprising that the most prominent feature of the city is its waterfront, or the ghats. It is also believed that a dip in the holy waters of the Ganga will cleanse your soul, never mind the alarming level of pollution in the river. And a Masaan, or crematorium, is a prominent feature along the ghats of the city. Neeraj Ghaywan, in his directorial debut, reminds you how insignificant life really is when everybody anyway ends up in a masaan.

In their struggle to incorporate the new into the old, the city and the people of Benaras have thoughtlessly plunged the youth into a world of chaos and despair. Shaalu Gupta (Shweta Tripathi) would have never socialised with Deepak Chaudhary (Vicky Kaushal) if it were not for social media. Once they meet, and fall in love, Deepak becomes more conscious of his background - he is a "Dom", or one who burns dead bodies, and therefore almost an untouchable, despite his educational qualifications as an engineering student. The Guptas belong to a higher caste, and any liaison between them and a Dom would be ideally restricted to business transactions. Personal relationships are discouraged, and love between the two castes is unheard of. Shaalu does not care because she is a modern girl though trapped in an ancient world. In fact, she is more willing to listen to her heart than Deepak is.

Devi Pathak (Richa Chadda) is not very different from Shaalu. Her father (Sanjay Mishra) is a learned Sanskrit professor, now retired, and they belong to an upper caste. Devi depends on the internet to learn life's lessons, including how to make love - and her only teacher is internet pornography. When she tries to make practical use of her knowledge, she is immediately plunged into a world of blackmail, corruption and intimidation. Now her father and she both have to come to terms with the potential damage that her natural instincts may have caused.

Both Shaalu and Devi, despite the challenges, know in their hearts that they have not done anything wrong. The yoke of expectations and of perceived morality may hang heavy around their necks, but they face all adversities with their heads held high. It is never easy, though, but the screenplay gives them the confidence that it is no sin to be individualistic. As you would expect, it is the women who have to prove themselves. The men just philosophise, stress and condemn. Some of the men are evolved enough to understand the women, but just about.

The director emphasises the plight of a progressive individual in a continuously regressive society. He also brings to our notice that the more modernisation attempts to make our lives easier, the more society wants to fall back on primitive practices and beliefs. In the end, however, all we are, are dust and bones.

This rather straightforward approach has its demerits, at least in this movie. Sometimes, in an effort to be as plainspoken as possible, the narrative underplays the point of the film, and some important moral (and other) lessons may be overlooked completely.

This Indo-French collaboration has minimal melodrama, and the monotony of the lives of the people in the story is emphasised by a simplicity in dialogues and settings. The Benaras that Masaan showcases is neither the psychedelic and exotic India that foreigners (and even Indians) are familiar with, nor is it an unrecognisable slice of small-town India. The clothes that the characters wear, like the dialogues that they mouth, are simple and to the point. The cinematography is sublime and never intrusive, given it has so much to play with. The flow of the movie does not falter, and the two hours are up before you realise.

Richa Chadda, one of the most recognised faces in this movie at least, does not deliver the perfect performance that you expect from her. She becomes too involved in her character, at least in her head, and does not give you enough range to understand Devi better. Sanjay Mishra, familiar and almost typecast in this film, creates a more profound effect as the aging and concerned father. A special cameo by Pankaj Tripathi is effective, and unforgettable.

The stars of the film, without trying too hard, are Vicky Kaushal and Shweta Tripathi. They both portray, very realistically, youngsters giddy with the excitement of falling in love with people out of their league. The supporting cast, with dialogues in chaste and regional Hindi, leave an impact.

Masaan does not have the mass appeal that the releases of the preceding weekends have had (Baahubali and Bajrangi Bhaijaan). It is, however, a gentle nudge to film buffs to remember that films are also about stories that are supposed to touch your hearts, instead of just leaving you awestruck.
Share. Save. Connect.
Tweet
MASAAN SNAPSHOT 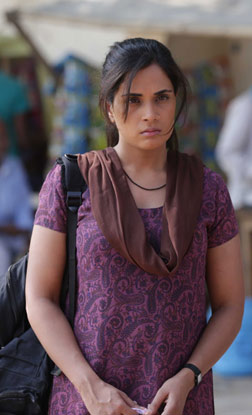 ADVERTISEMENT
This page was tagged for
Masaan hindi movie
Masaan reviews
release date
Richa Chadda, Vicky Kaushal
theatres list
Follow @fullhyderabad
Follow fullhyd.com on
About Hyderabad
The Hyderabad Community
Improve fullhyd.com
More
Our Other Local Guides
Our other sites
© Copyright 1999-2009 LRR Technologies (Hyderabad), Pvt Ltd. All rights reserved. fullhyd, fullhyderabad, Welcome To The Neighbourhood are trademarks of LRR Technologies (Hyderabad) Pvt Ltd. The textual, graphic, audio and audiovisual material in this site is protected by copyright law. You may not copy, distribute, or use this material except as necessary for your personal, non-commercial use. Any trademarks are the properties of their respective owners. More on Hyderabad, India. Jobs in Hyderabad.