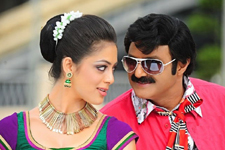 Deepa Garimella / fullhyd.com
EDITOR RATING
4.5
Performances
Script
Music/Soundtrack
Visuals
7.0
4.0
3.0
6.0
Suggestions
Can watch again
No
Good for kids
No
Good for dates
No
Wait for OTT
Yes
In the wake of Telugu cinema's old order having totally collapsed - with top gun Chiranjeevi having left the scene, Venkatesh choosing to do one movie every two years and Nagarjuna foraying into gentler genres - Balakrishna has only himself to compete with. And while that fact gives us bonanzas like Simha and Sri Ramarajyam once in a while, it also means we have the Okka Magadus and Adhinayakudus to live with more often than not.

Srimannarayana is actually a much better movie than the recent dud Adhinayakudu. However, it remains another of those assembly line Balayya movies that feature the same do-gooder fighting the same atrocities in society, wearing the same clothes, spewing the same propaganda and romancing the same number of heroines as he has been for 2 centuries now.

In the movie, Balakrishna plays a journalist Srimannarayana, who unearths scams faster than the CBI can ever hope to. This is primarily because he can fly through his intro when other heroes simply walk. Also, he can retrieve vital USB drives from inside the blouses of female journalists of rival channels when the situation demands.

Srimannarayana's father is a farmers' activist who has started a trust fund for his farmer brethren, called the Jai Kisan Trust. The trust has received humongous funds from the general public and rich doctors, bankers and police officers. But on the day that Srimannarayana's father has to access the bank account, things take a twist.

Cheesy as it may be, this whodunit makes for an okay thriller that has some interesting twists. Srimannarayana doesn't pick up superhero stunts this time, but settles for inventive ways to finish the villains. That way, this is a game of brains and not special effects. Of course, technology plays a role, too. In one scene, Srimannarayana guides a girl, who is being chased by goons, through the narrow lanes and by-lanes of a colony to a nearby MMTS station - via a mixture of video calling and GPS technology that Google had better make cost-effective soon. The dialogues are fun too. It is only the romances with the women that are painful to hear, watch and experience.

However, the movie won't work because it has a B-grade feel to it, and it is only the fans who will get a kick out of it. Indeed, Balakrishna has stopped even caring about people who don't care about him.

Balakrishna does the same thing he always does. His costume designer clearly needs to be changed. Parvati Melton looks starved, and Isha Chawla is too young to be romancing the ageing hero.

The other characters are the same set of faces you see in every film - Rao Ramesh, Suresh, Kota Srinivasa Rao. The comedy bits with Jayaprakash Reddy, M S Narayana and Krishna Bhagawan work.

The songs are agonizing to listen and watch. The visuals are nothing great to speak about.

Not watching Srimannarayana won't lead to tragic results. Ignore if you're not a fan. And remember that in a review of a Balayya movie, nothing is ever made up.
Share. Save. Connect.
Tweet
SRIMANNARAYANA SNAPSHOT 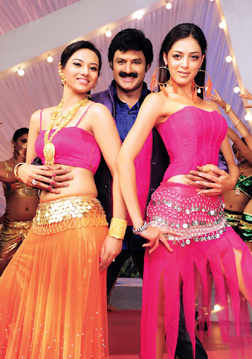 ADVERTISEMENT
This page was tagged for
avane srimannarayana telugu movie movierulz
atade srimannarayana full movie telugu
Srimannarayana telugu movie
Srimannarayana reviews
release date
Follow @fullhyderabad
Follow fullhyd.com on
About Hyderabad
The Hyderabad Community
Improve fullhyd.com
More
Our Other Local Guides
Our other sites
© Copyright 1999-2009 LRR Technologies (Hyderabad), Pvt Ltd. All rights reserved. fullhyd, fullhyderabad, Welcome To The Neighbourhood are trademarks of LRR Technologies (Hyderabad) Pvt Ltd. The textual, graphic, audio and audiovisual material in this site is protected by copyright law. You may not copy, distribute, or use this material except as necessary for your personal, non-commercial use. Any trademarks are the properties of their respective owners. More on Hyderabad, India. Jobs in Hyderabad.