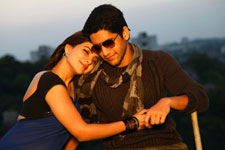 Kritika Deval / fullhyd.com
EDITOR RATING
7.0
Performances
Script
Music/Soundtrack
Visuals
6.5
7.0
8.0
9.0
Suggestions
Can watch again
Yes
Good for kids
No
Good for dates
No
Wait to rent it
No
So... You have a situation that is ripe for astronomical amounts of corruption, a renegade with a score to settle, and a host of villains who vocally celebrate their animalistic dominion over said situation. This might sound like the setup for every single "commercial" flick in Tollywood history, but something different happens in Autonagar Surya, a something that has been happening in a surprising number of big budget Telugu flicks in the recent history.

You see, Tollywood seems to have caught on to the idea that ginormous budgets need not preclude the telling of those amazing stories that made the size of those budgets possible in the first place. And therefore, you have the wonderful phenomenon of giant films that you won't be ashamed to proclaim as being of your generation ten years down the line.

Let's get started with the story. Surya (Naga Chaitanya) is a child who grew up in Autonagar in a seemingly idyllic boom era for diesel vehicles, with his uncle heading an auto garage. As expected, circumstances ensue, Surya's parents are killed, and the boy ends up in prison.

Upon his release, he is shocked at the steep fall of the region as auto driver unions, the local goon/politician and the town's mayor all form an unholy polyamorous trio to turn residents of the area into sacrificial lambs to be leeched off of. To further complicate the issue, he is dragged into a smuggling racket by his childhood friends, who he then has to wean off of the easy way out, obviously via gratuitous use of his hair-triggered right hook.

In fact, his right hook sees him through many a sticky spot, including blockades to an investment for his new invention set to revolutionize the motor industry, an auction for used vehicles, a riot that threatens to shut his business down before it even begins, his first boss fight, his second boss fight, and his final boss fight.

In fact, the whole plot feels like a well-crafted adventure / action platformer, with major milestones interspersed with little quests that eventually add up. While Samantha's character seems like one of these little quests, she still ends up with a character that is at least a little bit relevant to the story, which is a big deal.

The one thing that makes Autonagar Surya stand out in the revenge genre is the fact that there is a point to the strife apart from the fact that the villains should really be killed. The movie is built around the core belief that anything that halts human progress is an evil that must be eradicated. The idea that systemic corruption is not only harmful in its immediate effects, but also a debilitating handicap to humanity in the long run, underscores every altercation in the film, whether it is with the people of Autonagar or with the cartoon-grade villains.

This is a good thing. No. This is a great thing as we have a sore deficiency of big ideas in our film industry.

The first half is a rather gripping series of moves and counters that make you excited for the resolution. The second half takes the whole thing further. The funny part is, the whole shifting of the ball from one court to another is not always violent, which makes the picturesque bloodshed all the more gratifying when it shows up.

And all of this is held together by Naga Chaitanya's terrific performance, proving to all of his detractors (full disclosure: this writer included) that he only needed a terrific director to drag properly enunciated lines from his mouth. You can tell from get go that the man is completely invested in his character, and his earnestness in every scene is vital to the film's success.

Samantha does a decent enough job, and wears clothes that this writer wants very, very badly. If you want to spot Rakul Preet Singh in there, please be sure not to blink. Ajay, Ashish Vidyarthi, Jaya Prakash Reddy, Brahmaji et al play baddies with the same relish they always have, leading us to believe that they have the most fun jobs in the industry. Bharath also joins this League of Badass Gentlemen, making for an adorably terrible villain and infusing some much-needed genuine mirth into the plot.

Not that there is a lack of "mirth" - just that most of it has been force-fed to the film French paté style alongside the equally unnecessary (again, for the most part) songs. Bramhanandam's very own song symbolizes both of these issues wonderfully within one interminable set of 4 minutes.

At the end of it all, the only thing you take away from the film is the great way in which Surya's character grows. Right at the beginning, there is a bit where he figures out an efficient way to run vehicles on battery. Setting aside the difficulty that you, the average nitpicky viewer, might have in not subjecting this "innovation" to the lens of reality, the scene is followed by him joyously hijacking Samantha from her class and driving the vehicle to a cliff. When she whines about the fact that her father saw her en route, he solemnly says that her father saw her with Surya, but her father also saw her sitting on a vehicle going at 60 without using a single drop of fuel.

The scene seemed terribly grandiose at the time, but we guess that probably works on a "you had to have been there basis". The point is, though, that this kind of joy in a purpose, in a calling, is a rare thing in Telugu films where the norm is more of heroes having to set aside their lives in order to be rewarded a happy ending. 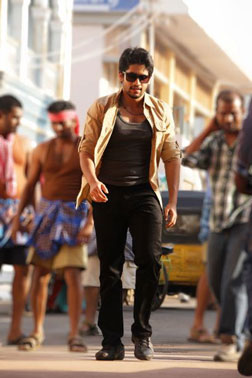 ADVERTISEMENT
This page was tagged for
Autonagar Surya telugu movie
Autonagar Surya reviews
release date
Naga Chaitanya, Samantha
theatres list
Follow @fullhyderabad
Follow fullhyd.com on
About Hyderabad
The Hyderabad Community
Improve fullhyd.com
More
Our Other Local Guides
Our other sites
© Copyright 1999-2009 LRR Technologies (Hyderabad), Pvt Ltd. All rights reserved. fullhyd, fullhyderabad, Welcome To The Neighbourhood are trademarks of LRR Technologies (Hyderabad) Pvt Ltd. The textual, graphic, audio and audiovisual material in this site is protected by copyright law. You may not copy, distribute, or use this material except as necessary for your personal, non-commercial use. Any trademarks are the properties of their respective owners. More on Hyderabad, India. Jobs in Hyderabad.